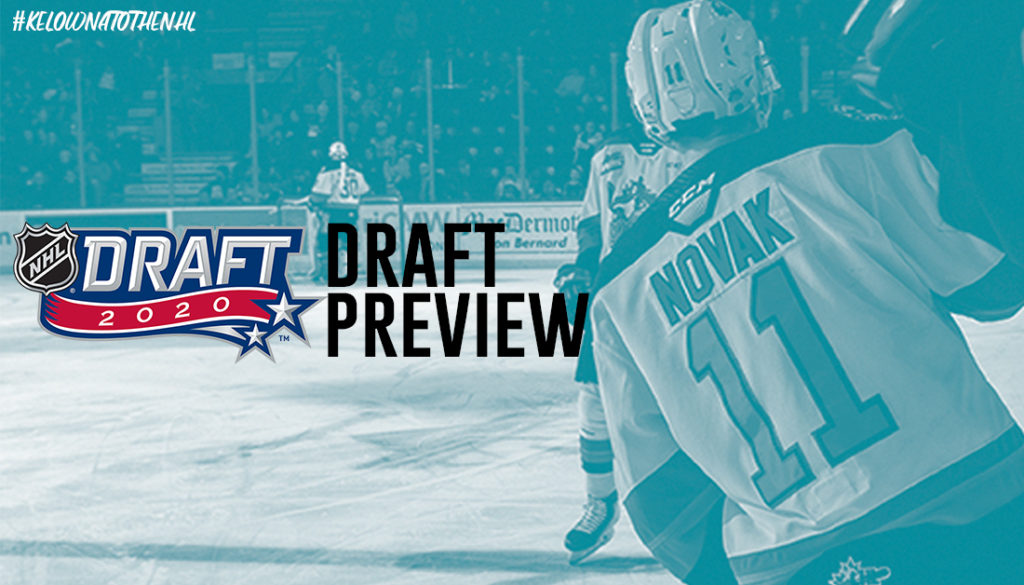 With the Stanley Cup awarded to the Tampa Bay Lightning, the 2020 NHL Draft is set to take place, starting tomorrow night.

Originally scheduled for June 26–27 at the Bell Centre in Montreal, the draft will take place virtually on October 6–7.

Import forward Pavel Novak is expected to hear his name called sometime on the second day of the draft. The Czech Republic product is ranked No. 85 on NHL Central Scouting’s final ranking of North American skaters for the heading into the draft.

His rank has him projected to be taken during the third round.

If a Rocket is selected during the draft, it will mark two years in a row that at least a Kelowna Rocket was drafted.

Last year Kelowna led the CHL with four players selected at the 2019 NHL Draft, including two in the first round; Lassi Thomson (19), Nolan Foote (27), Kaedan Korczak (41) and Dillon Hamaliuk (55).

Drafted 13th overall by the Rockets during the 2019 CHL Import Draft, Novak jumped into the Rockets lineup and made an immediate impact, continually finding the scoresheet.

Named the Rockets Rookie of the Year,  Novak led the Rockets in points this season with 58 (25G, 33A) in 55 games played. He also led the team in goals and game-winning goals with five, his eight power-play goals also tied Nolan Foote for the team lead. Novak finished fourth in CHL rookie scoring, eight points back of Kingston’s Shane Wright.

With the start of the Western Hockey League season delayed, Novak has been loaned to HC Stadion Litomerice that plays in the Czech2 with men. He has appeared in five games for Stadion, posting four points (1G, 3A) and two penalty minutes.

Pavel Novak (#2020NHLDraft) with a power-play one-timer for his first goal of the season.

Novak has 4 points (1g, 3a) in 5 #ChanceLiga games for Litomerice. pic.twitter.com/L4xifBMiIT

Ready for the draft

We recently caught up with Novak to see how life is back home, how his summer was, what he misses the most about Kelowna and much more. You can check out that article by clicking here.

“I’ve talked to a lot of teams. There were a lot of interesting questions, but one team had something like a psychology test that was challenging.”