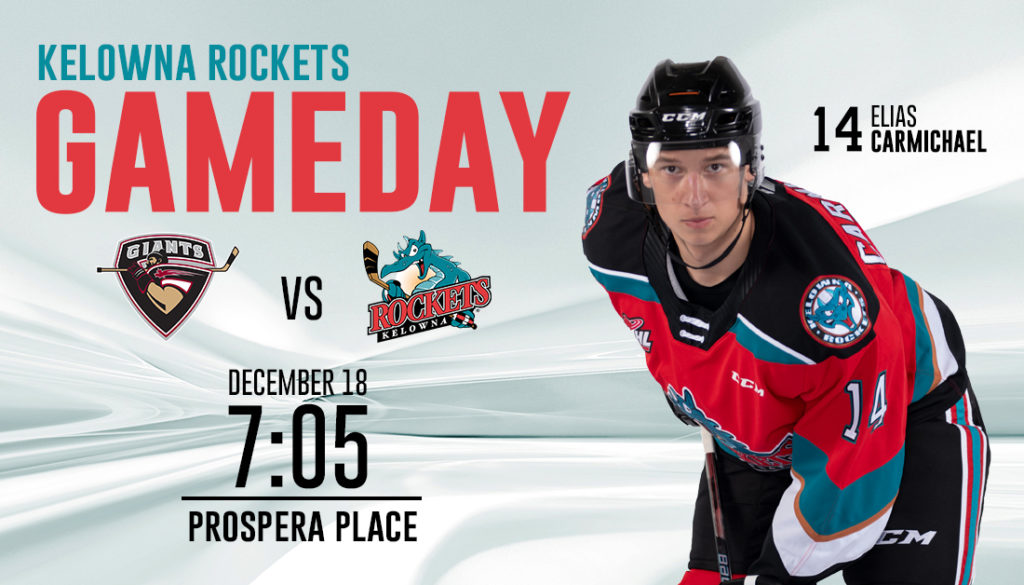 Tonight’s Preview: For the first time in over two weeks the Kelowna Rockets play a home game when they host the Vancouver Giants at Prospera Place. It is the second meeting of the season between these two teams. On September 29th, the Giants were a 4-0 winner. The Rockets are coming off a highly successful Eastern Division road trip where the team won 4 of 6 games, with all four victories decided by a single goal. The team beat Prince Albert, Saskatoon, Brandon and Moose Jaw and suffered a two-goal loss in Winnipeg and a one goal setback in Regina. Kaedan Korczak led the charge with 10 points (2+8=10) in the six games. The Rockets have points in four straight home games (3-0-0-1) and will start a portion of their schedule playing 7 consecutive home games against teams in the BC Division. After tonight’s game, the team breaks for Christmas before returning December 27th to face the Kamloops Blazers.

Hello Hockey Fans: The two newest members of the team will make their home debuts. Matthew Wedman, acquired in a trade with Seattle December 5th, will showcase his talents in front of the hometown faithful. The 20-year-old led the T-Birds in scoring last season with 40+37=77 and played 275 games in a Seattle uniform. Also making his debut tonight is 20-year-old d-man Conner McDonald. McDonald was obtained from the Edmonton Oil Kings Saturday night. McDonald scored 19 goals back on the blue-line last season, which was the second highest total only behind Giants rearguard Bowen Byram.

Broadcasters Notebook: Nolan Foote will play for Canada at the World Junior Hockey Championships, becoming the 18th player in the organization to do so….Nine of the Rockets last 10 games have been decided by one goal…The Rockets have played in 17-1 goal games this season, the most in the WHL…. Roman Basran was named the WHL Eli Wilson goaltender of the week in back-to-back weeks ending December 1st…Nolan Foote was named the 25th captain in franchise history (Tacoma/Kelowna) October 18th…The Rockets have played in a BC Division high 19 road games.