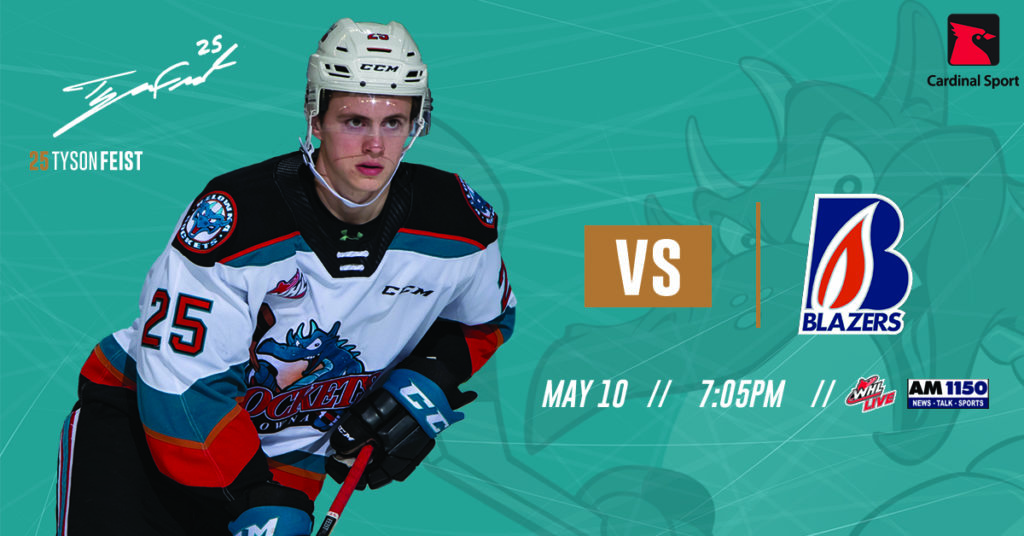 Tonight’s Preview: The Rockets and Blazers meet for the final time this season….The Blazers will be without assistant captain Logan Stankoven, the 2021 NHL Draft eligible forward departed the team to help Canada capture gold at the U18 Championship last week, he had ten points in six games for the Blazers this season. It’s also expected that captain Connor Zary will also be absent from the Blazers lineup, he suffered an upper body injury….The Blazers and Rockets have played three times this season, with Kamloops holding the season series 2-1…Kamloops downed Kelowna 6-2 on April 20. They then played a home and home series that was split, with Kelowna winning 6-1 on April 30 and Kamloops picking up a 4-3 overtime win on May 1….The Rockets are set to play their third game in four nights tonight, they snapped a three game losing streak with a 2-1 win over the Cougars last night in Kamloops. Cole Schwebius made 30 saves, while Trevor Wong picked up a pair of assists on his way to earning first star honours…..The Blazers enter tonight’s game on a four game win streak, they last played on Saturday where they defeated the Giants 3-1

Duo named to BC HUB team of the Week: Forward David Kope was named to the hub team for the second consecutive week in a row, the overage forward continued his hot streak with six points (3G, 3A) in four games last week. Defenceman Jake Lee earned a spot on the team after posting four points (1G, 3A) in four games.