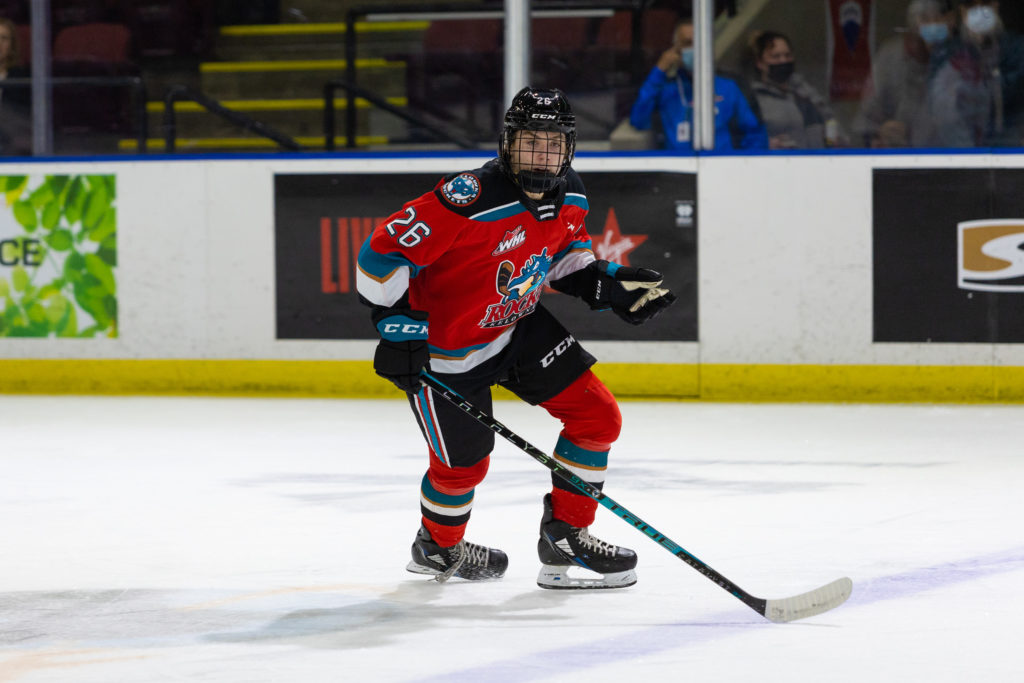 Coming into the 2022-23 Kelowna Rockets Training Camp, no other non-roster player has more WHL experience than seventeen-year-old forward Grady Lenton. The Tsawwassen, BC product was the lone affiliate player to appear in a game with Kelowna last season and at the end of his U18 season, Lenton joined Kelowna for their playoff run as an extra body.

It was just under a year ago that Lenton was walking into Prospera Place for his first Rockets camp, an 8th-round pick (#161) of the Rockets in 2020, Lenton had quickly caught the Rockets hockey ops attention. It wasn’t too soon after camp that Lenton inked a Standard Player Agreement with Kelowna.

After not being able to play during the 2020-21 season due to Covid-19, Lenton said that attending Kelowna’s camp allowed him to get to see how the Rockets organization operated and warmed him up for the upcoming season.

“It was a pretty cool experience,” said Lenton about camp. “To see how everything is done, even the little things from how the staff treat you, it’s so much different from what you’re expecting when you’re paying to play hockey. It was a great learning experience going back into the season.

“When I was sent back I was told the big things to focus on were the speed aspect and just continuing to develop as a player more, so that’s what I was working on throughout the season. Keep on training and working hard and good things will come out of that.”

Lenton has spent the last three years playing within the Canadians program, he says that having Adam Nugent-Hopkins as his head coach every season has allowed him to develop as a player better than anywhere else.

“I chose the Greater Van route because the academies were a bit too pricy for my family. I think the biggest thing was having Adam as the same coach throughout the years and him knowing who I am as a hockey player, which helps me because he knows what I need to work on to develop as a player. It creates a better relationship, it’s easier to focus on hockey when you’re not worrying about what kind of coaches you have or if you’re going to get a good coach or a bad coach.”

In addition to Nugent-Hopkins, Lenton has had plenty of people to lean on that have played high-level hockey to provide insight. He’s also cousins with Columbus Blue Jackets forward/World Junior gold medal scorer Kent Johnson and former Neuilly-sur-Marne France2 player Kyle Johnson, he’ll occasionally reach out to the pair for advice.

With Andrew Cristall away at the Capital City Challenge with Hockey Canada, Lenton got the call to join the Rockets as an affiliate player on November 21, 2021. At the time he was the BC Elite Hockey League’s U18 AAA leading scorer with 23 points (8G, 15A) and 36 penalty minutes over 17 games with the Greater Vancouver Canadians.

“I think I had a lot of confidence coming back to my team from the Rockets camp. I had been to Kelowna’s camp and it was in my mind what I needed to be able to do to play at the next level. I was showing up every day with the mindset every day to work and not ever stop. Being lucky to put up some points also helps along the way.”

He made his debut on November 26, 2021, against the Spokane Chiefs. Lenton picked up valuable experience that was capped off with a 2-1 win in a shootout.

“It was so different from being in U18 to the WHL, especially the speed. It was very exciting, but I was very, very nervous. I think without having that game before playoffs it eased my mind a little more if I were to get ice time in playoffs.”

Returned to the Canadians, Lenton rounded out his season with 37 points (16G, 21A) over 36 games, while adding 54 penalty minutes. He posted another five points (4G, 1A) and six penalty minutes through six playoff games.

With his U18 season complete, Lenton once again joined the Rockets for their playoff run. Despite not appearing in any games, he said that the experience gave him a better idea of what to expect what the WHL is like. Only up in Kelowna for a week earlier in the season, Lenton was thrown right into the mix.

“I think being there for the playoffs gives me a little bit of confidence, it makes me more comfortable that I was able to see how it is so that going forward into this season it’s easier for me to adapt to the lifestyle that it is. I think it’s going to help me as a player this season, knowing what’s ahead and what work has to be done.”

Speaking of work, we asked him how he’s been preparing for the season. While you’d think he’d be busy on the ice, he’s also been spending much of his time in the water.

“I’m a competitive swimmer and I have been my whole life, I’ve been in the pool seven days a week doing two-hour practices. That’s a great thing in addition to the conditioning training I’ve been doing. I’ve been also been in the gym two to three times a week and then on the ice two and sometimes three a week. In all, it’s been a lot, but I feel like it’s helped me going into camp.”

Self-compared to Bo Horvat when asked who he thinks his game most resembles, Lenton is ready to take his experiences from last season and translate them into being a full-time roster player for the Rockets this year.

“I think I would compare myself to Bo Horvat, he’s a great two-way player that is reliable in the offensive zone with a lot of skill. I feel that is who I relate to the most, I think I can be pretty reliable in all of the zones.

“I’m really hoping to be an every-night player in every situation. I want to show the coaches and my teammates that I can be someone who’s on the ice to make the right decisions, make the right plays and play a massive role in the team. That’s what I’m hoping for, obviously, it’s going to come with a lot of work, but I feel that I can do that.”

Tickets for the Rockets three preseason games and the regular season home opener on September 24 versus the Portland Winterhawks are now on sale through Select Your Tickets. Tickets can be purchased online through www.selectyourtickets.com, at the Prospera Place box office, or by phone at 250-762-5050.