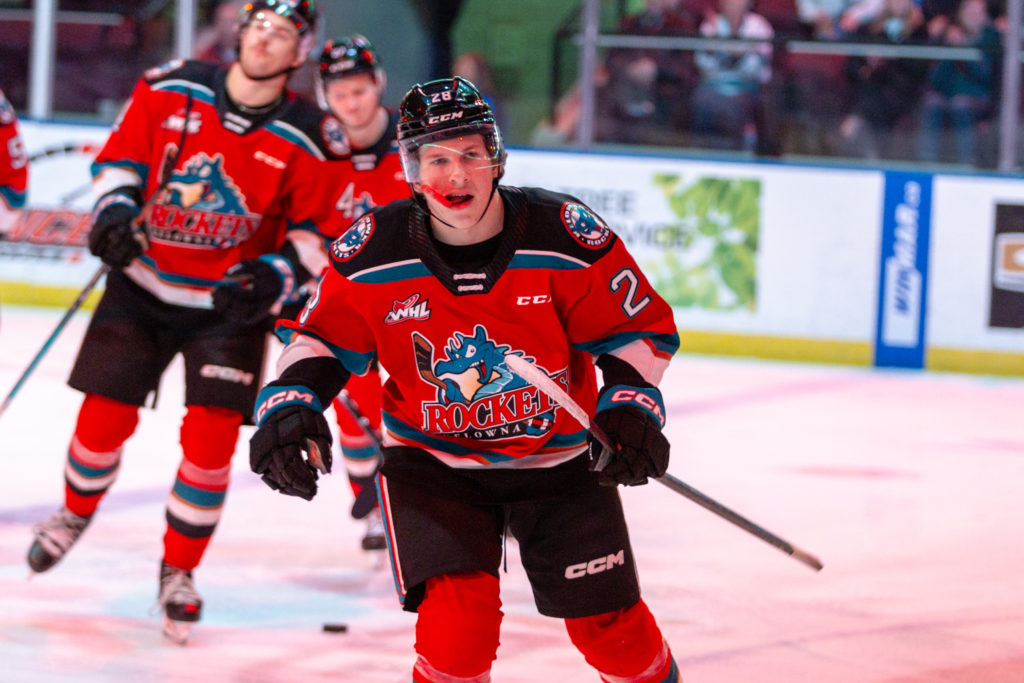 When you look up the word motivated in the dictionary, you should be able to find Kelowna Rockets forward Andrew Cristall’s photo there. That would be the best word to describe Cristall’s game this season.

After initially being ranked as a ‘B’ on NHL Central Scouting’s preliminary players to watch list released on October 25th the Vancouver, BC product admitted he was disappointed but didn’t let it deter him.

“Originally being ranked a B, I took it for what it was,” said Critsall after practice on Monday. “I think it made me a little more motivated, that I had something more to prove.”

Cristall sat second in team scoring and sixth in league scoring with 15 points (7G, 8A) through ten games when the rankings came out at the end of October.

He’s gone on a tear since the original rankings came out, posting 20 points (8G, 12A) and 27 shots on goal over the last seven games. NHL Central Scouting certainly took notice, updating Cristall’s and five others ratings to an ‘A’ on the Players to Watch list Monday.

“Andrew has been an offensive catalyst in Kelowna this year. He’s very gifted offensively, good on the power play, has great vision and knows how to score,” John Williams of NHL Central Scouting told NHL.com Monday.

While Cristall is happy to have reached the ‘A’ rating, he admitted that he’s not about to let up off the gas pedal.

“It was pretty exciting getting bumped up to an A,” said Cristall. “They recognized the success that I’ve had as of late, it’s a good feeling, but I’m definitely not going to stop.”

Expectations were sky-high for Cristall heading into this season after he finished third in team scoring with 69 points (28G, 41A) in 61 games last season, tying the franchise record for points as a 16-year-old rookie.

There’s been no such thing as a sophomore slump for the winger as he currently leads the Rockets in scoring and sits third in league scoring with 35 points (15 goals, 20 assists) in 17 games. Twelve of his points have come on the power-play, while he’s notched a team-high three game-winning goals and recorded 68 shots on goal.

“I think having a good summer heading into every season is crucial and I was lucky enough to get on a good pace early in the season. My linemates have really helped elevate me.”

While he’s quick to credit his linemates, Cristall also had high praise for 19-year-old winger Gabriel Szturc. The Czechia product currently sits second in team scoring behind Cristall with 27 points (8G, 19A) through 17 games.

“I love playing with Gabby. We only played a little bit together last year, but this season we’ve been playing together almost every game. We’re great friends off of the ice and room together on the road, so I think that’s helped our chemistry a lot. He’s an easy guy to room with, I’ve learned a lot about Czechia when it comes to music and landmarks.”

Cristall is currently riding a career-high eight-game point streak that’s seen him record 22 points (8G 14A) over that span.

We asked him if he keeps track of these sorts of streaks and while he admitted that he knows that he’s scored a bunch of points over a span, he isn’t entirely aware of the number of games it’s grown to until media people point it out to him.

Since he’s not meticulously keeping track of his stats, what exactly is Crsitall focusing on these days?

“I think my main focus is trying to be the best player on the ice every game, I think that’s something that I can do. I’m really working on my consistency and just being the guy out on the ice that can make an impact on the game.”

One thing that can be noted about the Rockets assistant captain is that while he’s certainly on a mission, he almost always looks like he’s always having fun. Whether it’s jumping into the team’s latest video for social media or during a stoppage in play.

“I mean, hockey is supposed to be fun, it’s not supposed to be work or anything like that. I’ve grown up playing this game and I’m still doing that now, you know to have it maybe be my career would be amazing. So I just go out there have fun and enjoy the moments while they last.”

Cristall has had a few dates circled on his calendar that are quickly coming up. During his short tenure in the WHL Cristall has only had the opportunity to face off against BC and US teams, that’s changed this season as the Rockets take on teams from the Eastern Conference for the first time since the 2019-20 season.

“It’s going to be fun when we get to play guys like Brayden Yager and Connor Bedard, I played at the U18’s with Yager and grew up with Bedard. I’m really excited to be able to play against them, and having them at home in front of our fans is huge.”

Your next chance to see Cristall and the Rockets on home ice is  Saturday, November 26th when they’ll face the 2022 Canadian Hockey League Rookie of the Year Brayden Yager and the Moose Jaw Warriors.