Adam Kydd ready to elevate his game for overage season 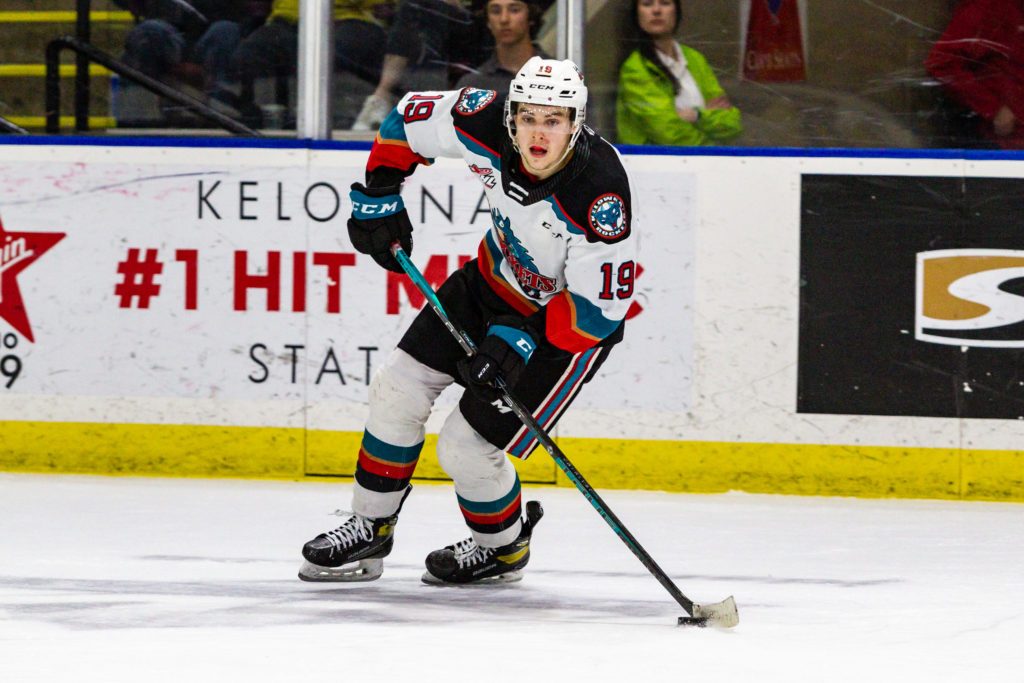 The puns flowed endlessly after the Kelowna Rockets acquired winger Adam Kydd from the Calgary Hitmen January ahead of the 2022 trade deadline, but the Regina, Sask. product wasn’t kidding around with his play after he joined the Rockets roster

Through 30 games with the Hitmen, Kydd had 19 points with just four of those points being goals. Following the trade, Kydd posted 33 points (14G, 19A) in 39 games while wearing the Ogopogo on his jersey.

While many of the Rockets struggled offensively in their first-round playoff matchup against the Seattle Thunderbirds, Kydd finished tied for second in team scoring with three points (2G, 1A) in five games.

“I think it was a combination of things for sure, confidence was a big part of it,” said Kydd about his spike in production after joining the Rockets.

“I wasn’t necessarily disappointed with how I was playing in Calgary, I only had four goals in I think 30 games I played there, but I just wasn’t super confident with my scoring ability. With the change of systems, change of guys I was playing with, change of coaches and everything else, my game just kind of slotted into Kelowna’s systems. I was able to succeed in an offensive capacity of the overall team, I had the mindset of being able to make plays and not necessarily be worried about turning the puck over all the time and having to play a black and white game. With the creativity that you see some of the players play with in Kelowna, I kind of started to gel that into my own game and found some offensive success.”

He also credits his parents with helping him make the transition to playing in Kelowna, both Landa and Tim Kydd joined their son for the season in Kelowna.

“My parents were used to seeing a few games here and there when I played for the Hitmen, they were a little disappointed that they wouldn’t have that opportunity anymore.

“They figured some things out with their jobs and were able to work remotely and come out to Kelowna for a few months of the season. It was awesome to have them there, they both provided great support—especially my mom with all the cooking. Having them out there worked out well and made moving cities more comfortable.”

Speaking of the trade, we asked Kydd about his initial reaction to the deal and what he thinks is the biggest change between playing in the Central Division and BC Division.

“I didn’t necessarily think it was out of the picture with being a 19-year-old and the trade deadline coming up, but I was really surprised when it happened. I really enjoyed it in Calgary; they’re a great team with great staff, coaches and players. At first I was definitely surprised, but then to find out that I was going to spot like Kelowna it quickly turned into excitement. The trade really worked out well for me.

“The main difference between the two divisions is the travel. In the Central, other than Swift Current, all of the road games are one and a half to three hours away. The only day trip for us in Kelowna this past season was really Kamloops. I really like the BC Division road trips, we get to see some great spots, like going onto the island when we play Victoria and visiting the Vancouver area. I hadn’t really been to those places other than my first year in Calgary when we did the BC trip.”

We also talked to the winger about his journey to the WHL, undrafted Kydd has now solidified himself as a top 20-year-old heading into this season.

“During the WHL Draft I wasn’t really sure what I wanted to do yet, I wasn’t super committed to hockey at the time. I enjoyed playing and always played at a high level growing up, I had a really good first year of U18 and kind of realized my love for the game. I kind of elevated from there, I played U18 AAA the next year for the Regina Pat Canadians and had a good year there developing.

“The Calgary Hitmen invited me to camp my 17-year-old year, I went and didn’t really have any expectations other than to do the best that I can and see what happens. I got a look and they gave me a chance, I played my 17-year-old year there with the Hitmen and I’d say it was an overall success.”

Heading into his final WHL season this season, we chatted with Kydd about his goals for the year.

“I want to keep developing all of my skills this season. When I got into the league I was 25 to 30 pounds lighter, smaller and slower. I’ve constantly worked on my body in the summers, and taken care of it during the season, while continuing to develop my hockey skills. Skating with other high-level players in the summer keeps you in the elite hockey mix all year round. I’m just going to continue to develop all of those skills and translate them into this upcoming season.”

Kydd and the Rockets are set to open the WHL regular season against the Portland Winterhawks on Saturday, September 24 at Prospera Place. Season tickets are now available to the general public for the upcoming 2021-22 Rockets season. Click here for details and pricing.