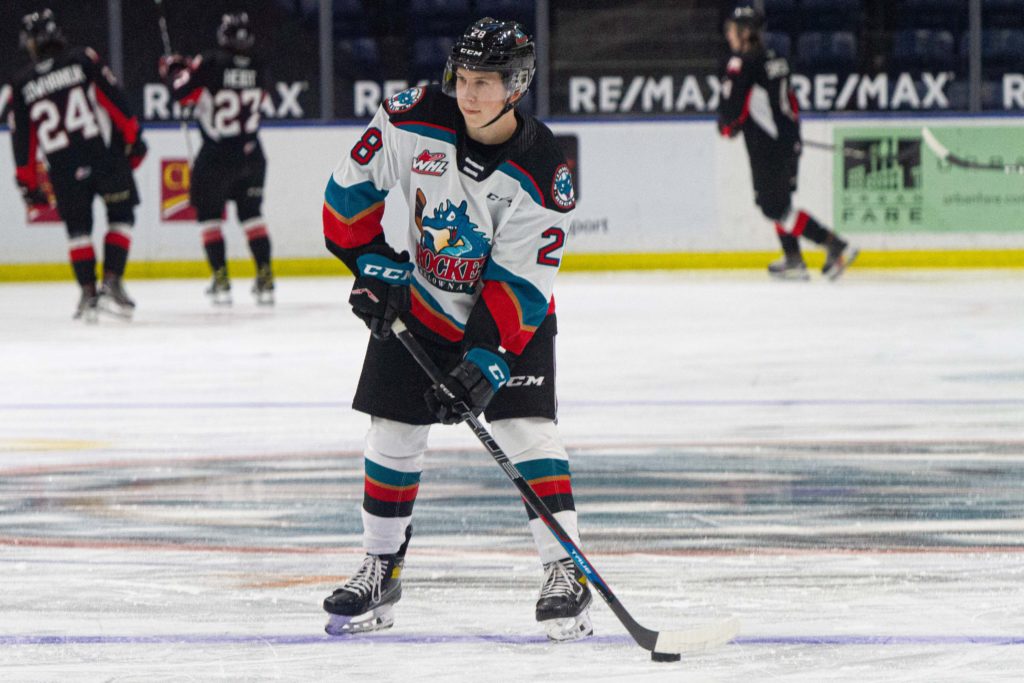 Kelowna Rockets 2020 WHL first-round pick Andrew Cristall was given one of the most unique opportunities of the 2020-21 season, joining the team for their shortened hub season.

Due to most hockey programs being on hold due to Covid-19, an exception was made for signed first-round picks to join their club for the full hub season.

Cristall appeared in four games with St. George’s School U18 Prep team, posting four points (3G, 1A) and four penalty minutes before their season was paused.

The forward said that getting the call to join the Rockets hub team as an affiliate player wasn’t something he expected, but that having the chance to be a part of it would help him be prepared for his 16-year-old season next year.

“It was really exciting to be invited to join the team,” said Cristall. “I didn’t expect to get the chance to play with Kelowna this season with everything going on. Once I found out, I was looking forward to being able to experience a year in the WHL and learn what it was all about and be ready to go for my rookie year next year.”

In the season opener on March 26 against the Victoria Royals, Cristall hit the ice for a couple of solo laps during warm-ups as the team stood at the gate and watched him.

“Some of the guys were joking about the rookie lap ahead of time, it was really cool to get out there and be able to take a lap. But obviously, it wasn’t the same without fans in the stands.”

He made a splash in his first game, picking up a pair of assists on Alex Swetlikoff’s two goals in a 5-0 victory over the Royals.

“I tried to stay level-headed throughout the season, but that first game was pretty exciting for me. I came into the game not really expecting much to happen, but getting those two assists helped boost my confidence.

“Coming in I didn’t expect to play in as many games as I did. At first, I thought I was just going to be there around the team, see what it was like and maybe play a game or two. But once I got there and I played in my first couple of games, I was pretty comfortable and realized I could definitely play a lot more.”

Cristall wound up playing in 14 games during the Rockets during their 16 game season, putting up five points, zero penalty minutes and a +3 plus-minus rating. He was just one of nine 2005 born skaters across the league to appear in at least ten games and record at least five points during the season.

The first of many for Andrew Cristall. pic.twitter.com/p11Eny9dFE

When asked about his thoughts on what the biggest changes were when it came to playing major junior hockey, Cristall pointed out three in particular.

“I didn’t really play any U18 hockey because of covid, so the jump from bantam to major junior was really eye-opening for me. The speed, the size, and the physicality were the biggest things for me.”

Typically Rockets players will billet alone or with one other player, but the youngest player on the roster was placed in a house with two other players.

“It was awesome living with Elias Carmichael and Ethan Ernst, they’re both great guys and it was a lot of fun with them. Our billet parents, Brenda and Wolf Wenk were the best. With two other guys living in the house, it can get pretty full, but they were great and helped me adjust.”

Cristall also touched on a veteran who he leaned on throughout the season.

“Tyson Feist was a big mentor for me this season, showing me the ropes and little things around the room. He would give me a little boost here and there.”

When it was all said and done, he’s thankful to have had the opportunity to have been a part of the hub season.

“It kind of gave me a head start on seeing what the league is like. The travel is obviously going to be a little bit different from what it was this past year, but seeing what the pace of play is like is really going to help me heading into next year knowing what I’ve experienced this year.”

The Vancouver, BC product is fully focused on next season, working with a few familiar names in the Okanagan.

“I’ve been back and forth between Vancouver and Kelowna for training this summer. In Kelowna, I’ve been working out with Travis Martell and working on my skating with Dynamic Edge and Jess Campbell. I feel working with them has helped me get stronger and taken my game to the next level.”

Cristall’s older brother, Andrew, plays across the bridge for the West Kelowna Warriors. The younger Cristall said that he’s looking forward to having his brother nearby.

“Tyler’s definitely helped me prepare for what junior hockey is all about. He’s playing in West Kelowna again, so hopefully, we’re able to see each other this season with whatever restrictions we have. It’s pretty cool that my parents would be able to come to town and be able to see both of us play in the same weekend.”

For Cristall now, he’s looking forward to summer winding down and getting back to Kelowna to suit up for the Rockets.

“I try not to have too many expectations of myself, I just want to go out there and play and have fun. With that being said, I hope to have a really strong year this season that hopefully propels me into my draft year the following season.”