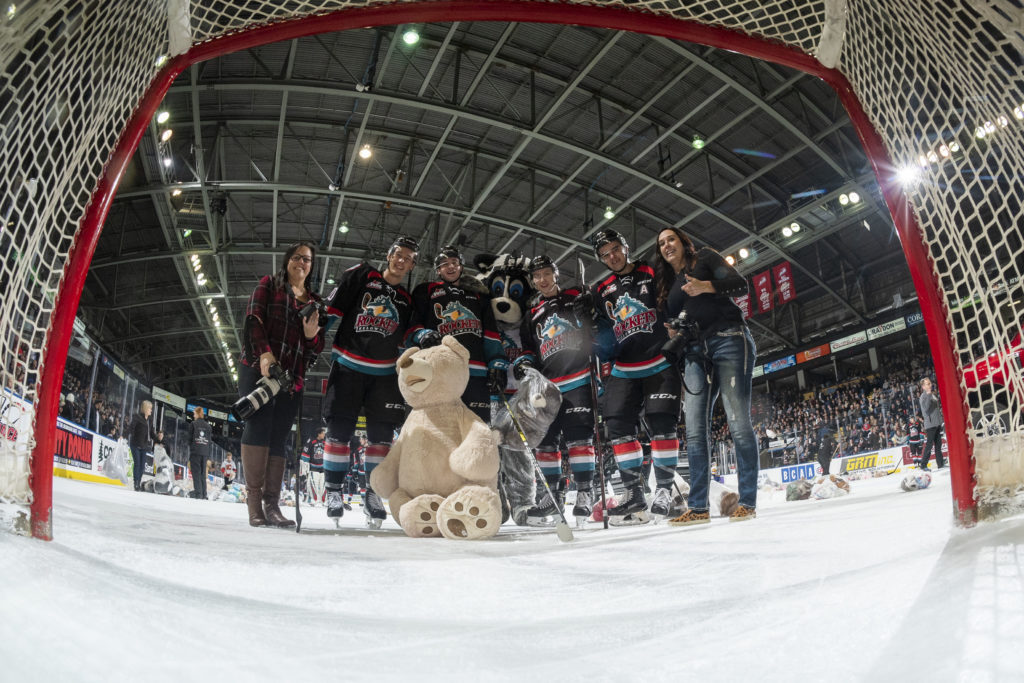 The Kelowna Rockets fell to the Saskatoon Blades 5-4 in overtime Saturday night at Prospera Place.

Saskatoon opened the scoring 11:27 into the first period when Gary Haden(7) crashed the net, putting the puck and himself into it. The goal would be reviewed but was ultimately deemed good. Not even a minute later the Blades extended their lead on a goal from Tristen Robins(4). Kelowna fans had to hold onto their teddy bears as Saskatoon entered the first intermission with a 2-0 lead.

Early in the second period, a battle ensued in front of the Rockets net. Rockets starter Roman Basran took a stick to the back of the neck and stayed down. During that time Dawson Davidson(5) scored on the wide open net putting the Blades up 3-0, 1:32 into the middle frame. Basran would skate off the ice without any assistance, and Jame Porter replaced him in net. Basran watched the remained of the game from the bench. Rookie, Mark Liwiski made it rain teddy bears at Prospera Place when he put one past Blades starter, Nolan Maier at 10:29. After 20 minutes of play, the Blades held a 3-1 lead.

You only get one shot a season at a teddy bear goal! @markliwiski13 worked hard for it! 🐻 🚨
🍎 @DevinSteffler
🍏 Dalton Gally pic.twitter.com/MQBRJJ2jVW

Kelowna cut Saskatoon’s lead to one just 3:30 into the third when Leif Mattson(12) jumped on Nolan Foote’s rebound notching his third goal in two nights. Saskatoon’s Brandon Schuldhaus(3) would restore the Blades two-goal lead 14:57 into the third. Braydyn Chizen(1) would respond for the Rockets a minute later when he launched a bomb from the blue line into the back of the net. With 1:21 left in the game Kyle Topping (12) tied it up for the Rockets.

For the second night in a row overtime was needed. The Rockets had the first chance during extra time, but Dawson Davidson(6) was sprung on a breakaway securing the win for the Blades netting his second goal of the night.

Kelowna will be back in action Wednesday, December 5th when they host the Tri-City Americans at Prospera Place for hat Trick Wednesday. Purchase your ticket before 2 pm on game day, and you can enjoy the game, a pop and hot dog for only $19.99! Tickets are on sale at selectyourtickets.com, at the Prospera Place box office or by phone at 250-762-5050.