Blast from The Past: Brodan Salmond

Blast From The Past 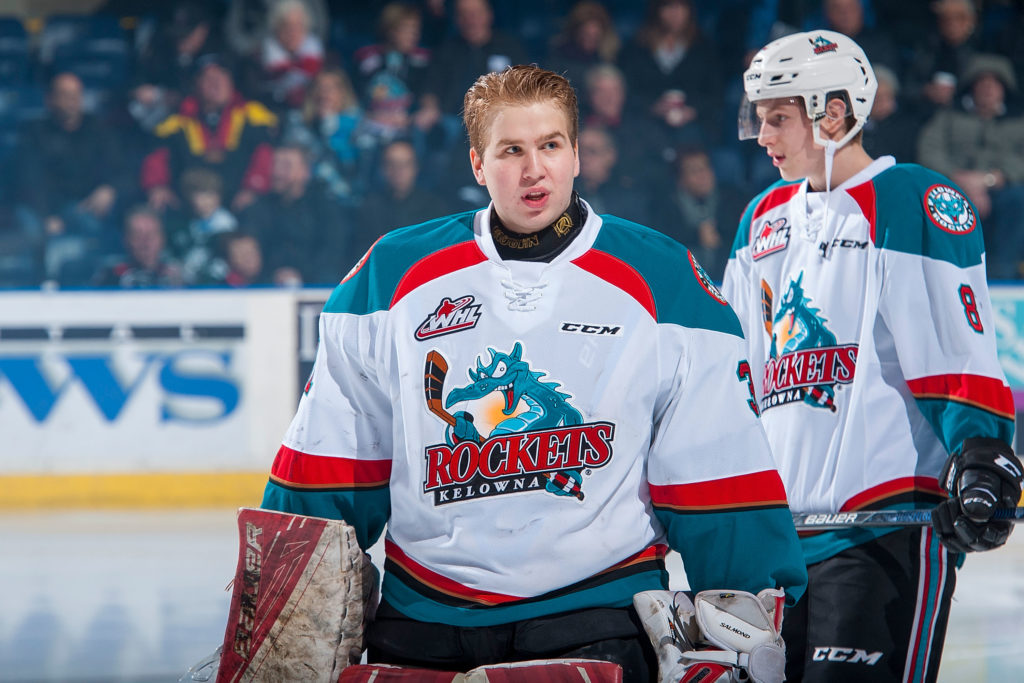 Former Kelowna Rocket goaltender Brodan Salmond‘s name should still ring a bell for most Rockets fans, it’s only been a few years since he was between the pipes here in Kelowna.

Originally a tenth round pick of the Rockets in the 2013 WHL Prospects Draft, the Calgary product joined the Rockets for the remainder of the 2015-16 season then went on to play two more seasons in Kelowna before wrapping up his junior career with the Moose Jaw Warriors.

We caught up with Salmond recently to chat about his junior career, how he’s utilizing his WHL Scholarship and where he hopes to go in the future.

Playing out of the Edge School’s program during the 2012-13 campaign, Salmond didn’t get his hopes up too high when the  WHL Draft rolled around in May.

“I wasn’t expecting to be drafted, I didn’t really have the best year in bantam,” said Salmond. “It was the first year Edge had ever had a Bantam Triple-A team there, we weren’t the best.

“At the end of the year, I made the Alberta Cup, which is where a lot of WHL scouts go to watch at the end of the season. I had a pretty good tournament there, so I thought maybe there was a chance. I kinda waited around all day on draft day, then I saw my name called in the tenth round and I was pretty excited, especially going to Kelowna. I had heard so many good things about the organization and was just really excited to get started.”

During the 2014-15 season and started the season with the Camrose Kodiaks of the AJHL where he went 11-6-0. In February he was offered the chance to join the Rockets and didn’t look back.

“I wasn’t really expecting to play in the WHL as a 17-year-old, I was playing Junior A and kind of looking at going to college. Then Jackson Whistle got hurt and I got called up. For the first two years there, I got to play behind Michael Herringer and learned a lot from him and our goalie coaches.

“I was pretty lucky to have been on two pretty good teams those first two years, we went to the conference final both years. In my third year there, I got to play with James Porter, we had a good team again and won the BC Division, but lost in the first round. Overall, it was just an awesome experience being a Rocket, I got to play in a great city with good guys in front of great fans.”

When asked about some of his most memorable moments, he said that you never really forget your first win.

“My first game is probably one of my fondest memories of my time with the Rockets. It was pretty cool to make my first start in the Western Hockey  League, we pulled off a 6-4 win on the road in Prince Geroge.”

Salmond appeared in 56 regular-season games for Kelowna over three seasons, putting together a 28-19-2-0 record. He also played in three playoff games over that span.

With Porter ready to take over the starting role and a young Roman Basran waiting in the wings, the Rockets released Salmond ahead of his 20-year-old season during the summer of 2018. Waiting for an offer, he joined the Moose Jaw Warriors for his last year of junior.

“Going to Moose Jaw wasn’t really something that I was expecting, I got waived through the league and was kind of waiting around and looking for a place to play. I didn’t really get a call to go there until a week before camp. I was pretty excited, I worked hard that summer and went in had a good camp and a good preseason, was lucky enough to make the team. We had a  pretty good team that year, a really good group. It was a lot of fun being able to play in the league as a twenty-year-old, kind of be a leader and play well there.”

What happens to a player after junior hockey though? We asked Salmond about the process of finding a home to play following their time in the Western Hockey League. In another moment of deja vu, Salond joined a program in his hometown at the last minute.

“During my twenty-year-old year, I started to talk to a lot of university teams throughout the year. U of C was one of the last schools to call actually, I had been talking to a lot of schools out east in Ontario. The Dinos had a goalie leave for pro kind of late and they gave me a call, it was kind of a no brainer to stay in my home city where I could go to a great school and play for a good team.”

Last year USports didn’t play due to Covid-19, but Salmond is excited about their team that is stocked full of former WHL players like Dakota Krebs, Sean Strange, Josh Maser and Tyson Upper.

“It’s awesome, we’ve got a great program here. They treat us really well, it’s like you’re still playing junior hockey with how well they treat you. We’re young this year, but we’ve brought in some high-end recruits. I think we’re going to continue to get better, we want to improve and be one of those top teams in the conversations like the University of Alberta or the University of Saskatchewan are.”

While he’s busy between the pipes for the Dinos, he’s also had the chance to serve as the Emergency Back-Up for the Calgary Flames – where his good friend and former teammate Dillon Dube plays.

“The old Mount Royal goalie does it most of the time, but I’ve had the chance to do it a few times when he’s not there. I can’t do it on weekends, because U of C plays, but I’ve done a couple of weekday games. It’s a cool experience, you go in through the players entrance and sit in the press box during the game. It’s definitely a little nerve-wracking when you see a goalie maybe tweak something or get run into, you think you might have to go down and put your gear on. But overall it’s a really cool experience, you get to watch an NHL game for free and have the chance to put your gear on and sit on the bench.”

As for school and what he hopes to do with it, we talked to him about the future and how being a player in the WHL has helped with the financial impact of attending school.

“I’m a communications and media studies major. After school, I definitely want to stay involved in hockey somehow, I’m not sure yet if that will be in coaching, working for a team in team services, or utilizing what I’m going to school for in the media side of things. I want to stay in hockey, it’s given me so much throughout my whole life and I just kind of want to be able to give back and continue to stay involved in it.

“The WHL Scholarship is huge, you can just focus on school and hockey and not have to worry about paying for school or anything like that. I have a lot of friends who put themselves through school or are coming out of school with student loans, that’s something that WHL players don’t have to worry about through the scholarship package from the league. It’s a pretty great incentive to play in the Western League and have your school paid for after.”

The 2021-22 season serves as the 29th year of the WHL Scholarship program. Established on a league-wide basis in 1993-94, over 7,000 WHL Scholarships have been accessed, representing an investment of over $30 million by WHL Clubs. This season, WHL Clubs will contribute in excess of $2.5 million to the 365 WHL graduates utilizing the WHL Scholarship.

Administered by the WHL Office, WHL Scholarships are solely funded by the WHL member Clubs. Every player who plays in the WHL is eligible to receive the WHL Scholarship. For every season a player plays in the WHL, they receive a guaranteed, full-year of WHL Scholarship including tuition, textbooks and compulsory fees to a post-secondary institution of their choice. The WHL Scholarship is a fully-guaranteed academic scholarship with no requirement to play university hockey to qualify. The WHL graduate can apply the funding to any post-secondary or career-enhancing program of his choice, including trades schools or professional career training programs.