Catching Up With Jake Lee 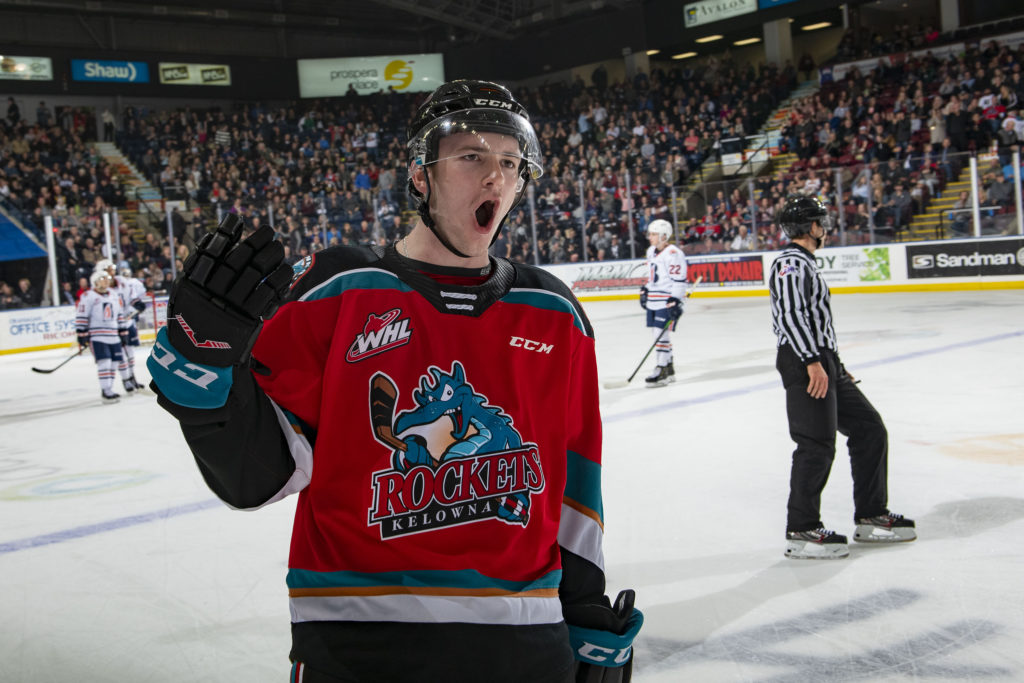 Defenceman Jake Lee was ecstatic to hit the ice with the Kelowna Rockets last August at his first training camp with the club.

The then 18-year-old was coming into camp after a busy summer, he was dealt to the Rockets in a blockbuster trade from the Seattle Thunderbirds during the 2019 WHL Bantam Draft. In June, he attended the 2019 NHL Draft in Vancouver but went undrafted, despite his status he was invited to the San Jose Sharks camp as a free agent.

“Coming into Kelowna it was awesome,” said Lee. “The guys and the coaches really helped a lot with my adjustment.”

He knew that there would be high expectations for any team that was set to host the Memorial Cup, but says that it’s no different than being on any other team.

“There was pressure there this year, but you can expect that from any team whether it’s a Memorial Cup team or not.”

Depended heavily on the backend, Lee stepped up to the plate, putting up career highs across the board. In 60 games, he collected 30 points (5G, 25A).

In addition to goals, @JakeLee03409003 will also wrap your Christmas presents. 🎁🎄 pic.twitter.com/xYa2UjgwKr

With the season coming to an unexpectedly early end in March, Lee has kept himself busy in one of the most unique ways.

“I bought three boats, my best friend and I found a few junkers on Kijiji for dirt cheap and have put some money and time into them. We’ve been rebuilding and working on them, touching them up. It’s something to keep me busy throughout the pandemic, it’s better than playing video games all day.

“My dad’s a mechanic, so he’s been a big help when it came to the electrical. My friend and I took care of all of the labour, like building a new floor and painting/grinding. You learn as you go, I guess.”

Lee plans on flipping two of them and keeping the third for himself.

When asked if he thought maybe being a mechanic was something that interests him post hockey, Lee said he sees it as more of a hobby.

“I don’t know if being a mechanic is a lifetime thing, but I’m getting to the age where I want to start building some skills together. Learning how to do a little electrical and mechanical work will go a long way.”

Lee has also been working at his dad’s shop, something that he’s done since he has done over the last few summers.

“I’ve been working at my dad’s shop, I’ve been working there every summer since I was 13 or 14. I do physical labour and odd jobs around the yard, I think this summer I’ve almost painted the entire building.”

The Rockets coaching staff has kept in contact with the team, they’ve had a handful of zoom calls over the last few months to keep everyone connected no matter how far away they are.

“It’s nice to keep in touch with everyone on those calls, especially with it being such a long summer. I talk to Michael Farren quite a bit, and I also like to talk to the 20s from last year a lot too.”

Would’ve been unfair anyways.. cheers to some unreal 20💣’s, till next year @kelownarocketswhl 🚀

When the gym was closed early on in the pandemic, the Sherwood Park, Alta, product enjoyed his time working out from home, but has since resumed going to the gym and has hit the ice.

“I’d do at-home workouts five times a week, which was nice being able to work out at home and not having to go out anywhere for it.

“Ice opened back at the start of July in Alberta. I’ve been in camps throughout that entire time, hitting the ice a couple of times a week. Being in the Edmonton area, I’ve skated with a lot of the local Edmonton Oil Kings guys. I saw Roman Basran a few weeks ago at a camp in St. Albert, I had the chance to shoot on him.”

On the ice, he’s been busy to gearing up for his third Western Hockey League season. Rockets Head Coach Kris Mallette said that Lee will be tasked with a bigger role this upcoming season.

“We’re going to be looking for a veteran presence on the backend and progressing to an all-around defenceman,” said Mallette. “I think that out of the returning players we have coming back, we’ll lean heavily on him to eat a lot of minutes.”

Reflecting on this past season, Lee said that his favourite moment was the longest road trip of the year.

“My favourite moment was the prairie road trip in December, we played really well. I had a great time this season, and I’m looking forward to next season.”