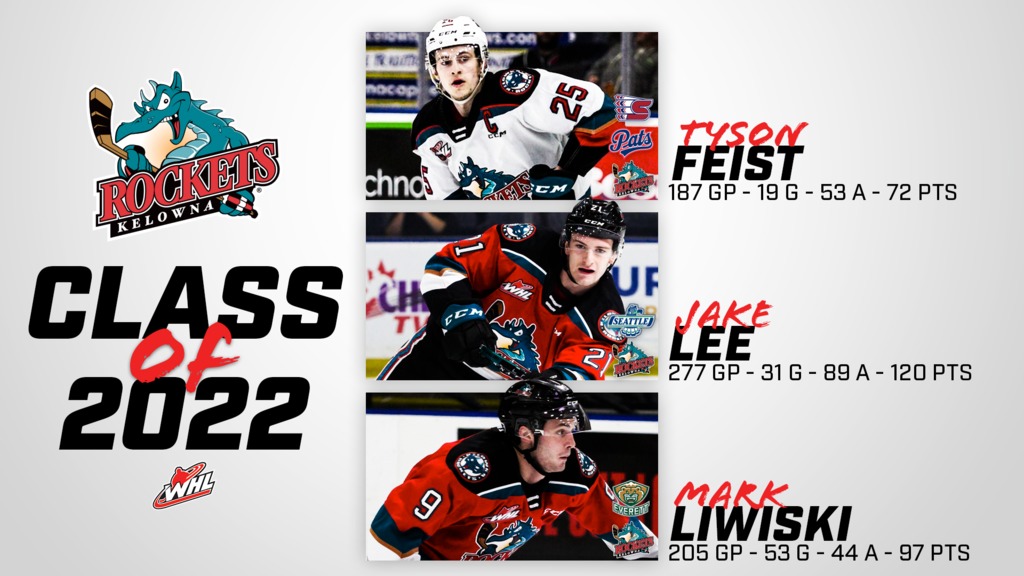 Throughout the month of August, we’re celebrating the class of WHL Graduates from the 2021-22 season. Join us as we go Club by Club in recognizing the achievements of the 20-year-old players from this past season moving on to access their WHL Scholarship or to professional hockey.

We continue our 22-part series with the Kelowna Rockets and their graduating trio of Tyson Feist, Jake Lee and Mark Liwiski.

Tyson Feist
Feist appeared in 187 WHL regular season games over the course of his career, making his debut with Spokane at the start of the 2017-18 season after signing with the Chiefs earlier that year.

The product of Dawson Creek, B.C. made 33 total appearances with Spokane before being dealt to the Regina Pats midway through the 2018-19 campaign.

Feist spent 53 games with the Pats, totalling 11 assists, before moving back to his home province and the Kelowna Rockets at the 2020 WHL Trade Deadline.

The defenceman scored his first WHL goal just over a month after arriving in Kelowna as part of a three-point effort February 12, 2020 against the Tri-City Americans.

Feist’s game took off with the Rockets. In 101 games he scored 17 times and amassed 56 points, including a 15-goal campaign this past season as Kelowna’s captain.

He’ll be making the jump to professional hockey in the fall after signing with the AHL’s Syracuse Crunch.

Jake Lee
Selected in the first round of the 2016 WHL Draft by the Seattle Thunderbirds, defenceman Jake Lee suited up in 293 regular season and playoff contests over parts of six seasons in the league.

He made his WHL debut in Victoria February 7, 2017, then played in two playoff games that spring (ironically, both against the Kelowna Rockets), as the Thunderbirds won the WHL Championship.

As a 16-year-old, the product of Sherwood Park, Alta. totalled 10 points in 64 contests during the 2017-18 season, scoring his first WHL goal in his first game of the campaign September 23, 2017 against the Tri-City Americans.

He’d go on to play in 67 games the following year before a blockbuster deal landed him with the Rockets ahead of the 2019-20 regular season.

Over the next three years, Lee played in 142 regular season contests with Kelowna, topping out at 16 goals and 46 points this past year, which led the Rockets defence corps. He was named to the B.C. Division First All-Star Team for his efforts.

Lee concluded his tenure in the WHL during the 2022 post-season, scoring once and adding three assists in five games against his former club.

Mark Liwiski
A third-round pick of the Everett Silvertips in the 2016 WHL Draft, Mark Liwiski served as a hard-nosed forward over the course of 205 WHL contests.

The product of Dauphin, Man. broke in with the Silvertips in 2017-18, making his debut on home ice September 23, 2017 versus Portland. He skated in 10 games as a Silvertip before moving north to the Kelowna Rockets ahead of the 2018-19 season.

After scoring nine times in 16 games during the shortened 2020-21 season, Liwiski’s offensive output increased more than three-fold in 2021-22. He scored a career-best 24 goals and 46 points including a career-best four-point outing April 9, 2022 against the Vancouver Giants.

Liwiski, who celebrated his 21st birthday Monday, August 8, finished his WHL career with 54 regular season and playoff tallies, the last of which came April 23, 2022 in a WHL Playoffs contest at Seattle.

Take the hit. Make the play. Get the goal. Not necessarily all in that order, but Mark Liwiski knows how it's done.@Kelowna_Rockets | #WHLPlayoffs | #SEAvsKEL pic.twitter.com/GeyjqOzOSD