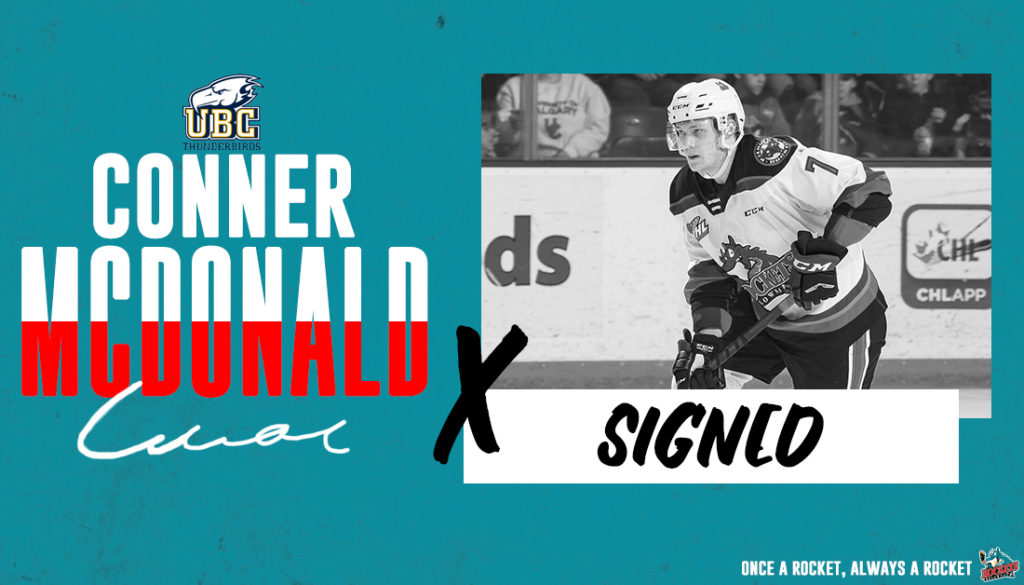 Kelowna Rockets defenceman Conner McDonald will continue his hockey career while pursuing an education at the University of British Columbia next season.

“I couldn’t be more excited to be part of the T-Birds moving forward and going to school at UBC,” said McDonald in the release from UBC. “I really feel (the Thunderbirds) are on the cusp of building something really, really special and very good and dangerous so I just wanted to be a part of that. I believe in the development they can offer at UBC and when you mix all those attributes together it makes for a pretty easy decision to go to school there.”

🏒 MHKY | A huge addition to the @UBCMHKY blue line, former @blazerhockey, @EdmOilKings, and @Kelowna_Rockets defenceman Connor McDonald will join the blue and gold for the coming season #GoBirdsGo

The Rockets acquired the Delta, BC product from the Edmonton Oil Kings before the holiday break this past season. He appeared in 32 games with the Rockets, posting 16 points (4G, 12A), 31 penalty minutes and a +2 plus-minus rating.

The Kamloops Blazers originally drafted him during the second round (No. 24) during the 2014 WHL Bantam Draft.

Former Rockets Jake Kryski and Jonathan Smart played for the Thunderbirds this past season.

For each season played in the WHL, a player is awarded a one-year post-secondary scholarship, which includes tuition, compulsory fees and required textbooks.