THE WESTERN HOCKEY LEAGUE HAS ANNOUNCED ITS RETURN TO PLAY PROTOCOL FOR THE 2020-21 SEASON, CLICK HERE TO LEARN MORE
THE ROCKETS ONLINE STORE AND STORE IN PROSPERA PLACE ARE TEMPORARILY CLOSED
January 4, 2019 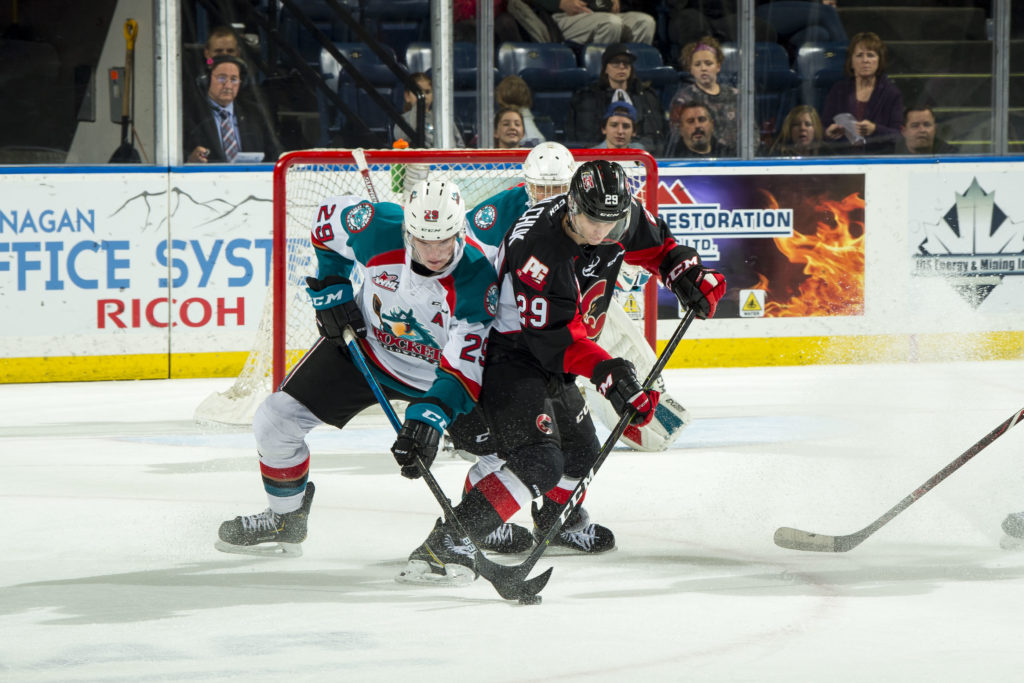 The Kelowna Rockets were downed by the Prince George Cougars 2-1 in a shootout on Friday night at Prospera Place in Kelowna, BC.

The Rockets and Cougars went back and forth throughout the first, but neither team could find the back of the net in the first twenty minutes.

Kelowna was awarded their third power play of the night when Joel Lakusta high sticked a Rocket. It would take the Rockets just four seconds to capitalize on the man advantage, Conner Bruggen-Cate (4) got his shot past Cougars starter, Taylor Gauthier at 14:28. The Rockets headed into the second intermission with a 1-0 lead.

Prince George’s Jackson Leppard (8) got the puck past Rockets netminder, James Porter 10:47 into the third while on the power play to tie the game. The game was tied 1-1 after 60 minutes, extra time was needed to decide a winner.

The two teams exchanged chances throughout a thrilling overtime. Lassi Thomson looked like he had sealed the deal for the Rockets, but nailed the post. After five minutes, the game headed to a shootout.

Kelowna is back in action tomorrow night when they head to Kamloops to face the Blazers at 7:00 pm at the Sandman Centre. They’ll return home to host the Moose Jaw Warriors Wednesday, January 9th for Hat Trick Wednesday. Tickets are on sale at selectyourtickets.com, at the Prospera Place box office or by phone at 250-762-5050.