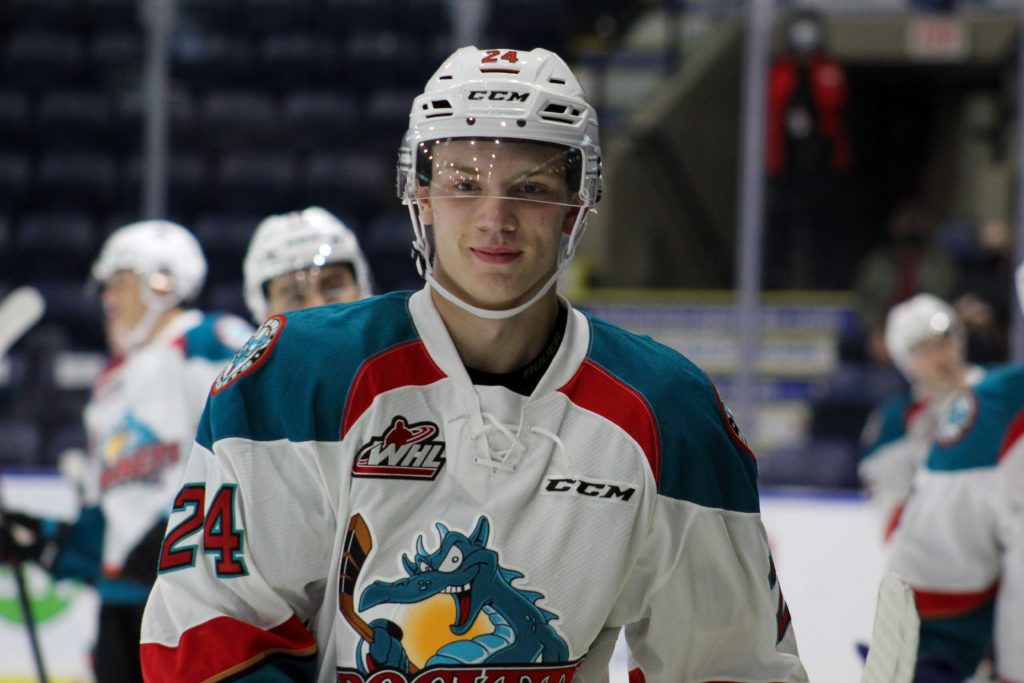 For Kelowna Rockets centreman Dylan Wightman, saying that he’s living the dream is an understatement.

A product of Kelowna, Wightman grew up a super fan of the Rockets. He attended events throughout the early years of his life and many photos can be found of a young Wightman at events and games.

“I was like the number one Rockets fan growing up,” said Wightman. “It was cool coming to pretty much every game growing up, we sat over on the Zamboni side. Even if my parents couldn’t take me, I would come with my grandma or another relative. I went to every game, every community event and the awards every year.

“We had four tickets from when I was about five until 15 and then I got too busy with my own hockey.”

Wightman said that having access to his local team fueled a passion for the game that eventually motivated him to want to play for the Rockets someday.

“It was awesome to be around the team growing up. I was a massive fan and if I wanted to meet the team I was able to. I was there high fiving them by the gate, at community events, skating during the anthem with the team. Anne-Marie (Hamilton) brought me into the room when I was a kid too.

“When I got older and was really starting to get seriously into hockey around atom was when guys like Jamie Benn and Leon Draisaitl were here, it was me watching what the Rockets did and how they played.”

Growing up, Wightman’s favourite player was former Rockets defencemen Luke Schenn. There are countless photos of young Luke and Dylan together at community events. As both grew up and Schenn moved onto the NHL, Wightman continued to follow Schenn’s career.

This past summer when Schenn brought the Stanley Cup to Kelowna, Wightman stopped by to get a photo. Don’t worry, we can report that he didn’t touch the cup.

“I think I picked him as my favourite player because when they were in the community, he was always super friendly. I kind of just gravitated toward him and he would always come and spend time with me at events. After he made it into the NHL, I would always go to Vancouver to watch him play when he was in town.

“It was cool when I was little, it was obviously me looking up to him and wanting to be just like him. I actually used to be a defenceman just like him.”

Who was his favourite player growing up? Luke Schenn of course! pic.twitter.com/pDz1vjqhHb

Why the change to forward? His team had a short bench one game and he made the change, it was then that Wightman discovered he loved being a centreman and taking faceoffs.

During his WHL Draft year during the 2017-18 season, he posted 17 points (6G, 11A) through 30 games with the Okanagan HA U15 Prep Team (CSSHL U15). Despite a strong showing, he went undrafted. He said that at the time it was a major blow, but that eventually it all worked out for the best.

“After the draft when you’re not picked you don’t really realize that it doesn’t really mean anything, but at the time it was pretty heartbreaking. I got three or four camp invites, which isn’t that crazy, but I chose Kelowna. Being a huge fan, not having to travel, and having the ability to live at home really swayed my decision.

“I think it was always in the cards to play for Kelowna, I always wanted to be a Rocket and didn’t see myself anywhere else. Going undrafted kind of made me think of the different options, but I was lucky enough to get a camp invite from Kelowna and made the most of that. I was listed, then the year ended up going how I wanted it to go and I ended up signing with the team.”

By the time January rolled around, his play had impressed the WHL’s Rockets enough that they signed Wightman. He said that the experience was a whirlwind, but that he was able to get a real taste of the league in his first few games.

“It all happened so fast, I signed on the Monday and the team had a lot of injuries, so I was on the road trip to the US by the end of the week. I played in Everett for my first game and it was a close game, we lost 3-2. It was pretty cool to see all of those fans, I had never played in an atmosphere like that before. Then we went to Portland and got worked pretty hard, in saying that, I got to play a lot when the score started to get out of hand. Being able to get more ice-time was awesome for me personally, but it was a long 14-hour drive back to Kelowna.”

Honoured to sign with the @Kelowna_Rockets. Thank you to everyone who has helped me along the way. Excited for what the future holds! pic.twitter.com/WKoABEjGIg

By the end of the season, he led Okanagan Rockets in scoring with 55 points (20G, 35A) through 39 games and earned U18AAA All-Star honours.

The team sat atop the U18 AAA standings with a record of 30-2-3, unfortunately, what he hoped would be a deep postseason was cancelled by Covid-19.

“It was a great season for me, we had an unbelievably good team and we were on track to do something pretty special and then Covid-19 hit. Having support from those players was huge for me, playing with all the guys who were working towards the same thing I was.

“We had a special team and I was able to kind of find my way into a role that helped me succeed and earn some personal awards — which was huge for me because I had never done anything like that before.”

The 2019-20 Okanagan Rockets featured a handful of Kelowna Rockets prospects, including Wightman, Rilen Kovacevic, Jackson DeSouza, and Steel Quiring. The quartet has been fortunate to have spent some special moments together.

“My first game in the WHL was with Rilen on that trip to the US. My family and I had actually billeted both Jackson and Steel during separate years in bantam. We’re all really tight and it’s really special that we’re all in the WHL on the same team together.”

Last season Wightman cracked Kelowna’s roster for the hub season. He said that playing on a young team where he was given lots of ice time benefited his development.

“I had a great experience in the hub, I know we had the one hiccup with Covid there, but it was everything that I could’ve asked for getting the opportunity to play. For me personally, I got a lot of opportunities to play and develop and see what it was like to play on a night by night basis. I felt like I would take advantage of my chances, and that was the biggest thing was taking advantage of all of the opportunities I was given.”

On February 19, 2021, he had a game to remember against the Victoria Royals. Not only did he net his first WHL goal, but he found the back of the net twice and chipped in an assist en route to first star honours.

“It was pretty cool, I was just hoping to get a couple of goals that year and then I ended up scoring two that game. The first one was a nice rush by Noah Dorey all the way and I just tapped it into the open net. It was pretty awesome and see to see it on Twitter and having my phone blow up was awesome. It would’ve been nice if my family was at that game, but I know they were at home watching and cheering.”

Just a local kid who went undrafted, @WightmanDylan is living the dream. pic.twitter.com/vCBWY7NxbX

Wightman is looking to build off of last season’s seven-point (4G, 3A) performance through 16 games. He said that having such a young core group of guys in the Hub last year has benefitted the team moving into this season.

“We’re all one year older and super tight in the locker room, it’s a special group that we have this year. We’re all so close and kept in touch throughout the summer, now we’re going to keep growing together and pushing each other to get better and learn under the veterans.

One thing is for sure, Wightman is looking forward to seeing some familiar faces in the crowd throughout the season.

“It’s pretty sweet to be able to play in front of fans in general. Being from here, I have lots of friends and family who are able to come and watch. They used to take me to the games, so it’s pretty cool that it’s come full circle and will be coming to watch me play from now on.”