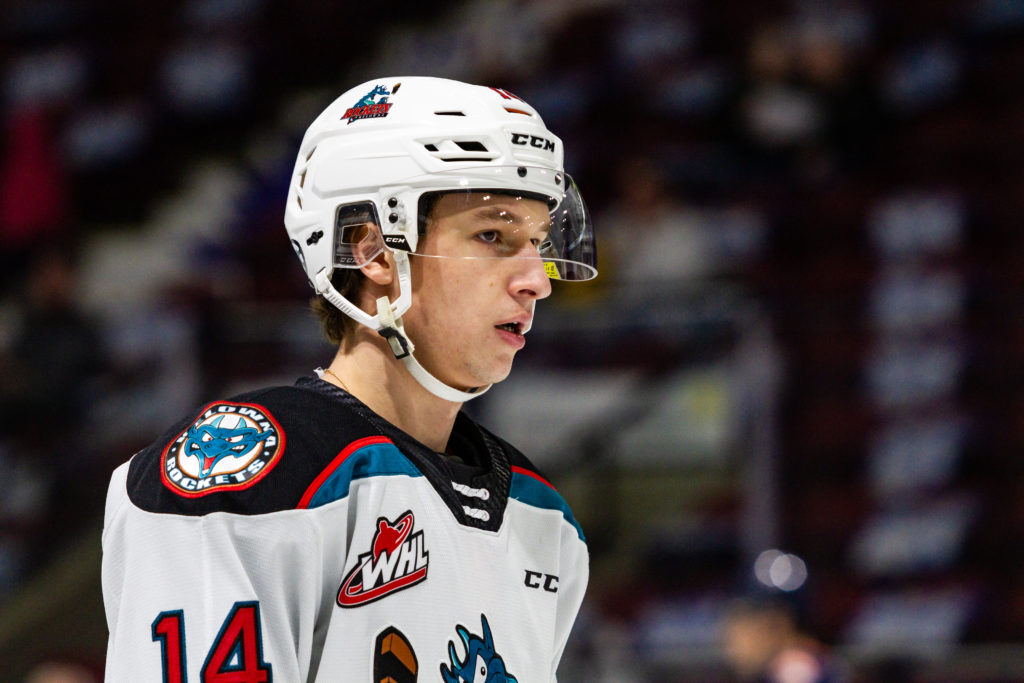 With 130 regular-season Western Hockey League games under his belt, Elias Carmichael comes into this season with the most seniority among the Kelowna Rockets defence corps.

Entering his fourth season with Kelowna, Carmichael is ready to take on more of a leadership role this season.

“It’s definitely going to be a challenge,” said Carmichael. “But I’m up for it and I think I’m ready for it. I just have to be a leader and show the new guys coming in what it’s all about, I want to make them feel more comfortable in our room and on our team.”

The Rockets leadership group hasn’t been decided for this season yet, but Carmichael wore an A on his jersey in Saturday night’s preseason game against the Kamloops Blazers.

Selected 40th overall by the Rockets in the second round of the 2018 WHL Prospects Draft, it feels like it was just yesterday when he and Trevor Wong were the lone 16-year-olds on the Rockets roster back during the 2019-20 season.

Carmichael credits one veteran defenceman, who he was often paired alongside, with helping him as a rookie.

“I learned a lot from the older guys when I came in here young, they showed me the way and now I’m stepping into that role. But I have to say Conner McDonald was the biggest influence in my first season. He came in halfway through the year, but he showed me a lot and was a really good leader.”

McDonald was acquired in December 2019 from the Edmonton Oil Kings to bolster the Rockets blueline for the 2019- 20 Memorial Cup season. He appeared in 32 games for the Rockets as a 20-year-old before the season was cancelled in March 2020 due to Covid-19.

In addition to taking on a leadership role, the 6’3, 191-pound defenceman wants to find more of an offensive touch on the ice this season.

He spent the summer working at the Eldorado Marina and training in Kelowna, including alongside fellow former Rockets teammates Tyson Feist and Jake Lee.

“I’m not loud player, I’m very defensive. This summer I worked on my offensive game a lot and put on a few pounds too, hopefully I’ll be a big hitter with some more points.”

Assistant coach Josh MacNevin, who’s in charge of the Rockets defence, said that the Langley, BC product will need to take the next step forward.

“A quiet game for some players is good, but this year we’re going to expect more out of Carmichael. He’s going to have to contribute on both sides of the puck and he has to be a little more physical. We’ve talked about it with him and that’s what we’re hoping for out of him this year.”

Often talked about as a quiet player on the ice, Carmichael is by far one of the most interesting Rockets off the ice.

Carmichael’s dad is from Quebec and his mom is from Slovakia, he grew up speaking both Slovak and French at home fluently.

His other hidden talent is that he’s able to ride a unicycle, he said he picked it up from his dad.

“I started when I was pretty young, my dad got me into it somehow. I just started by riding around the street and then did it around little trails around Langley. After that, I learned some tricks.”

Just like how his unicycle skills developed over time, Carmichael is hoping that he can add a few tricks to his game this season.

Elias Carmichael has a UNIque way of working on his hand-eye coordination. pic.twitter.com/Nnd5v8Kig1

Tickets for the Rockets two remaining home preseason games and the regular season home opener on September 24 versus the Portland Winterhawks are now on sale through Select Your Tickets. Tickets can be purchased online through www.selectyourtickets.com, at the Prospera Place box office, or by phone at 250-762-5050.