Ethan Neutens: Ready to challenge for roster spot at camp 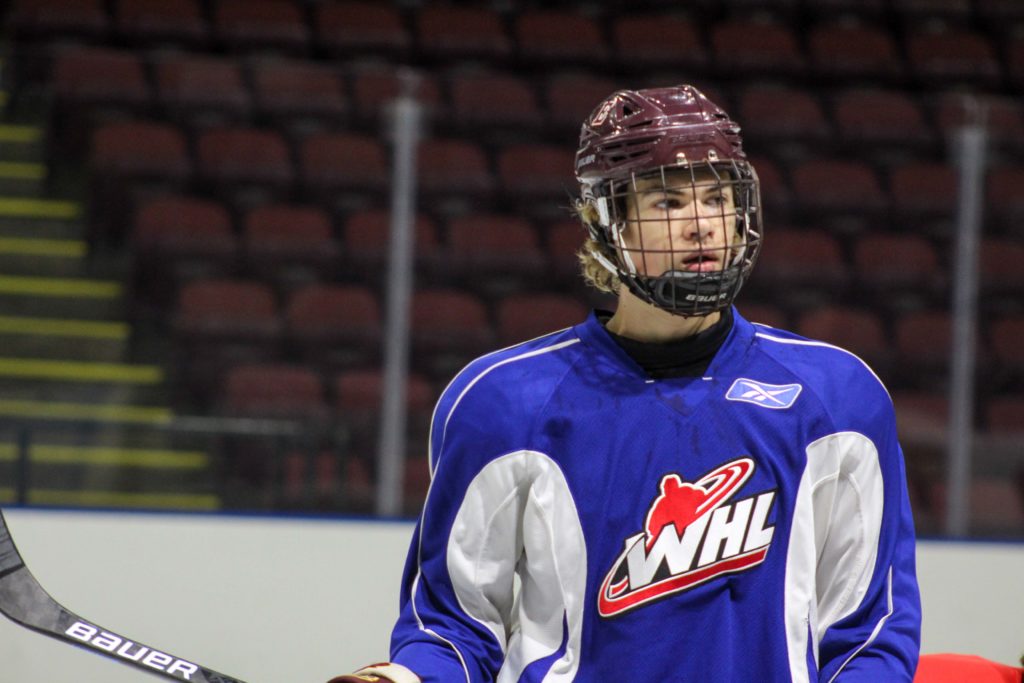 Every year a fresh group of rookies are ready to challenge for a Kelowna Rockets roster spot at training camp, with the 2022-23 season right around the corner no one is more ready to make that push than seventeen-year-old centreman Ethan Neutens.

A ninth-round selection of the Rockets in the 2020 WHL Prospects Draft, Neutens signed his WHL Standard Player Agreement with Kelowna this past June.

“I was sitting on it for a while to make sure it was the right decision for me,” said Neutens. “I looked at all of my opportunities and I just felt that the WHL was the right way to go. I pulled the trigger and I couldn’t be happier to be a Rocket.”

Just like many other prospects, the journey to now has been interesting for Neutens.

Rewinding back to his draft season back in 2020-21, the Cochrane, Alta. product jumped off the page. He was named the Airdrie Xtreme U15 AAA’s top forward after posting 23 points (8G, 15A), and 24 penalty minutes through 31 games with the Xtreme.

Playing AA with Bow Valley the season before, Neutens said that playing with Airdrie during his draft year helped him be picked by the Rockets.

“The year of the draft was such a successful season, it was kind of like a breakout season for me. The coaching staff was unreal in helping me. We all went into the group as one, we had our ups and downs throughout the season like any other team. It was a great group of guys on the team that year and they allowed me to excel, I’m really glad that I got the opportunity to shine there with them.”

With the WHL season cancelled due to Covid-19, the Draft was pushed up to April. Neutens tuned in online and followed along to see if he would be picked. He didn’t have high expectations at the time but was excited to his name pop up on the screen when Kelowna selected him.

With rinks and gyms closed, the forward was unable to skate. He said that he learned to not take his ice time for granted after the experience.

“During the first six months of the pandemic, you couldn’t skate. So right after the WHL Draft, I probably didn’t skate for like five more months. Honestly, it was just a lot of gym time. You just keep working out and then when you get back on the ice, it just feels great.”

Neutens has spent the last two seasons with the Canadian Sport School Hockey League’s Edge School in Calgary. We asked him how attending an academy benefitted him as a player, he said that the experience allows teams to grow closer.

“It’s a great atmosphere as a player. Having your teammates around you all day at school and on the ice blends the group into one, you form bonds with your teammates over long periods of time, and it’s great to have that translate on the ice.”

Last fall Neutens attended his first Rockets training camp. Standing at 5’1, 160, pounds when originally drafted by Kelowna in 2020, he was now 6’3, 179-pounds. The spike in height was enough to catch head scout Terry McFaul’s attention.

“He’s grown quite a bit from the last time we saw him. He’s been a pleasant surprise with how much he’s grown”, said McFaul at the 2021 Rocket training camp.

With no rookie camp the centre jumped right into the action with only roster players and drafted players, he was able to get his first look at the pace of play in the WHL and was sent back to Edge with some valuable advice from the brass in Kelowna.

“The speed and the intensity on the ice was the biggest thing I took away from camp,” said Neutens. “All the guys seemed very interconnected, they’re all really great guys and that group was special, I just hope to be a great part of it one day.

“They told me to work on having a shoot-first mentality, we were touching on that all season. I’ve always been the guy that looks for the pass first, when I played bantam with the Xtreme, I had that role where on the ice you need to make plays so the team can have success.”

Last season he returned to the Edge’s U18  team that was full of the future WHL talent, including 2021 third overall Brandon Wheat Kings pick Charlie Elick and fellow Cochrane product and Calgary Hitmen pick Hunter Sawka.

The centre posted 23 points (7G, 16A) and 12 penalty minutes over 34 games, it was enough to earn a look from the AJHL’s Canmore Eagles. Dressing for three games with the Eagles at the end of the season, he said that the experience was an eye-opener.

“Not having that much development in my last couple of years wasn’t the best, I’m really glad that I had the opportunity to go to Canmore.

“I got to see the speed that players execute certain plays. You can skate? Great, but you need to be able to skate and pass and shoot, be deceptive and do all of that at a high pace.”

With some AJHL experience and another summer of training under his belt, Neutens is ready to make the jump to the Rockets.

“You have to work on everything, I’ve really been focusing on that speed and explosiveness because you can always improve on that. When I’m on the ice, I’ve been focusing on being a little bit more aware, it’s a transition more smoothly into a faster pace play style.”

When asked if his goal was to crack the roster this season, the centreman said it’s much more than that.

“Not to just crack it, but to be a significant part of the team. I want to feel like I’m in the right place and feel the intensity on the ice and just push myself.”

The Rockets are set to open the WHL regular season against the Portland Winterhawks on Saturday, September 24 at Prospera Place. Season tickets are now available to the general public for the upcoming 2022-23 Rockets season. Click here for details and pricing.