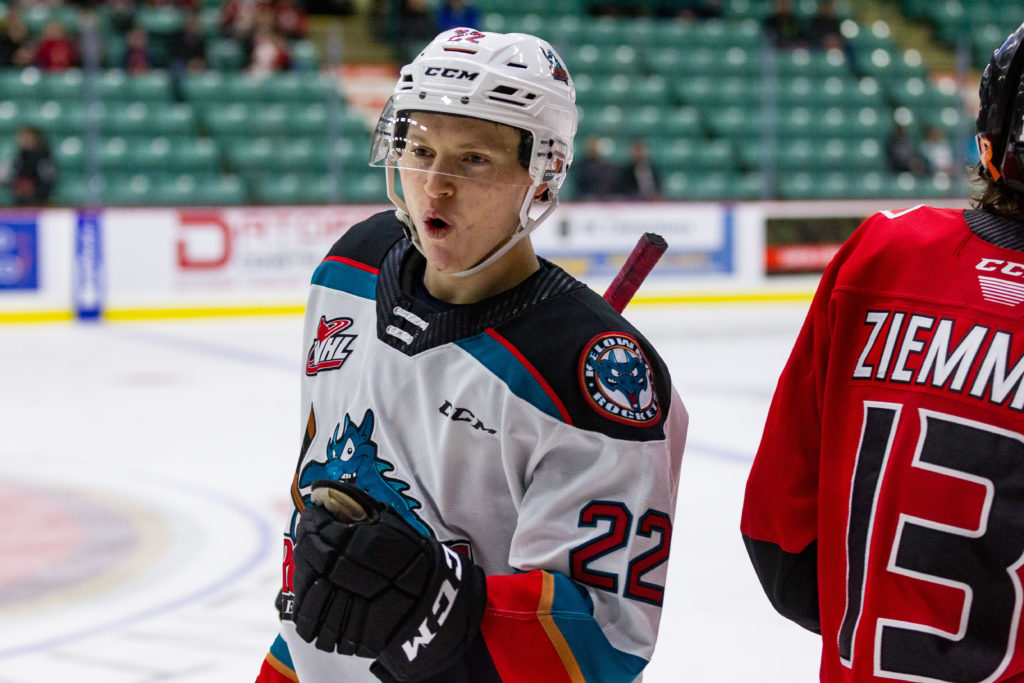 Kelowna Rockets forward Gabriel Szturc has returned to Kelowna for his second season with renewed confidence.

The Rockets 44th pick in the first round of the 2021 CHL Import Draft now has a year of playing in North America under his belt and a better grasp of the English language.

Entering last season, Szturc arrived in Canada with a limited English vocabulary. In addition to learning the language, the Cesky Tesin, CZE product said he also had to learn to play an entirely new style of hockey.

Fitted with a visor for the first time and playing on a smaller ice surface, Szturc said he couldn’t pinpoint what the most difficult part of adjusting to playing in Kelowna was.

“I would say overall everything was hard,” said Szturc in an interview following practice earlier this week.

“Cause the hockey is a little bit different here, it’s faster and you have to shoot from everywhere. It’s more aggressive I would say than in Europe. Another point is the language, it’s a whole new language for me. It was hard at the start, but Pavel helped me a lot and it was easier with him.”

Szturc credits fellow Rockets forward Pavel Novak with helping him get used to playing in Kelowna.

Novak, who was selected by Kelowna in the 2019 Import Draft, knew Szturc prior to the 2021 Draft. He pushed hard for his friend to pick the same route as him playing in Canada.

“He helped me a lot, he’s a very good friend and I’m thankful for him. He helped me a lot at the start here; he showed me everything in Kelowna, how it works and how to play in the league.”

It’s around this same period that Szturc said he realized that was starting to become more comfortable.

“I think when I got here, the boys were very nice to me when I didn’t know what they were saying. I felt comfortable with the language, I would say one or two months. It was pretty hard at the beginning to hear words and what the guys were saying.”

Speaking of hard words to say, we talked about how difficult his last name is to pronounce. It sounds more like ‘shtwetz’, but a lot of broadcasters were pronouncing it as ‘sturch’. By the end of last season, most broadcasters around the league were on the same page on how to say his last name.

“I have a very hard last name, even in Czech they don’t know how to say it. Almost every game is a different name.”

When it was all said and done, Szturc put together a rookie campaign that saw him post 41 points (16G, 25A), six penalty minutes and a plus/minus rating of +12. He was also awarded the Rockets Most Sportsmanlike award for the 2021-22 season.

Born after September 14th, his late birthdate in 2003 meant that this past June was his first opportunity to be eligible to be selected in the NHL Draft.

While he said it was disappointing to not be picked in the draft this year, he knows what has to be done to catch the attention of NHL scouts.

“I worked hard to be drafted last season but it didn’t go that way. I have to work hard this season like every other season, it’s all about the work.”

Despite not being picked in the draft, he had some summertime excitement after he was selected to represent Czechia at the 2022 IIHF World Junior Ice Hockey Championships in Edmonton this past August.

“It was very exciting, I like playing for my country and it’s a big honour. Especially the World Juniors, it’s a big event, I’m really happy that I had the chance to play there.”

Szturc appeared in all seven games for Czechia at the tournament, averaging 16:09 minutes of ice time, while posting six penalty minutes, a goal and eight shots on net.

His lone goal of the tournament was the game-winner in their opening game against Slovakia, he said that it’s one of the biggest goals he’s ever scored.

“Basically, I saw the Slovakia guys didn’t change well, so I was by myself in the middle so they passed me the puck and I wanted to drive the net. It went really well and it was the game-winner.”

Gabriel Szturc breaks the tie with under two minutes to play! #WorldJuniors pic.twitter.com/s5Kj4ZEuxQ

Czechia finished fourth, but not before creating a little noise. Entering the quarterfinals they were up against the defending champions, the Americans had finished the preliminary round with a perfect 4-0 record, never trailing in a game. They were expected to cruise past Czechia, however they fell 4-2.

“I think that we were big underdogs in that game, but we played very, very well. We beat the Americans, and it’s very big when you beat someone like America, it was an awesome feeling.”

Szturc will be eligible to represent Czechia again at this year at the 2023 World Juniors that will be held in Halifax and Moncton.

Now in Kelowna, a more confident ‘Gabby’ is to take what he’s learned over the last year and apply it to this season.

“This summer I was working overall to get faster and stronger, to be more confident on the puck. I want to step up overall as a player, I want to be better this year than last year. I want to make progress here.”