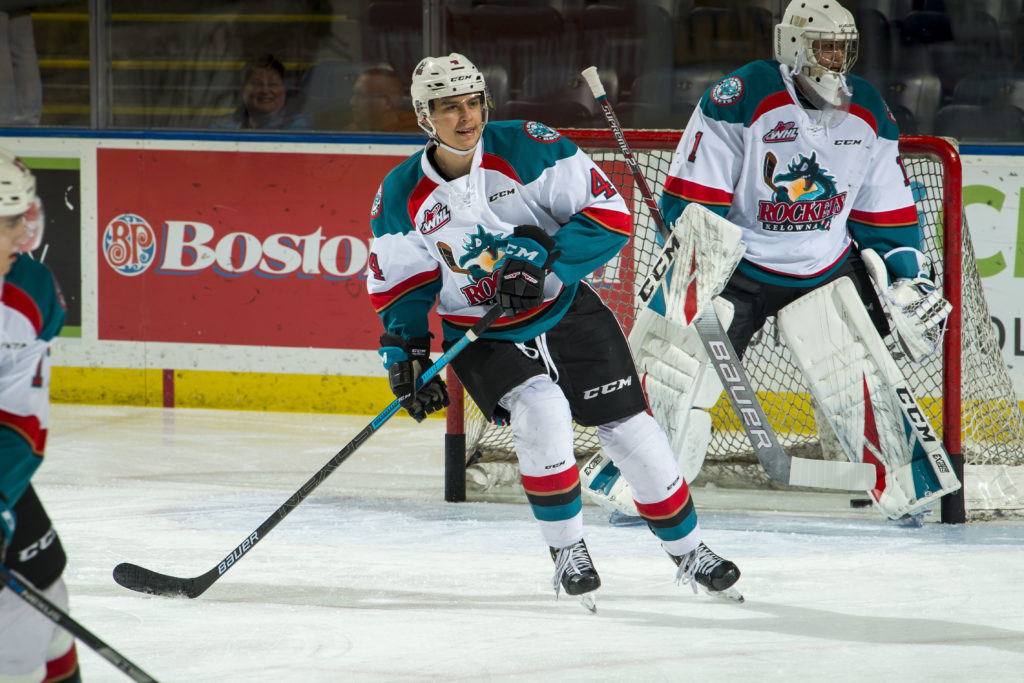 Game Day Preview: The Kelowna Rockets face the Prince Albert Raiders in the lone meeting of the season. It marks the return of former coaches Marc Habscheid and Jeff Truitt. The Rockets are coming off their biggest win of the season last night in Everett. The team snapped a six-game losing streak with a 2-0 shutout win against the best team in the Western Conference. James Porter made 40 saves while Michael Farren and Mark Liwiski scored second-period goals in the teams’ 18th win of the season. It was Farren’s first goal in a Rockets uniform and first goal in 27 games. It was Liwiski’s third of the season and came against his old team. Alex Swetlikoff and Shael Higson earned their first points with the Rockets. It was Swetlikoff’s first WHL point. Overall, the Rockets are 2-5-1-1 in nine games since the Christmas break. Following tonight’s game, the team hosts Victoria this Friday; Vancouver Saturday before facing the G-Men in Langley on Sunday. The Rockets are 14-12-3-1 in 30 games under head coach Adam Foote.

New Boys on Blue Line: The team acquired 20 year-old Shael Higson last Wednesday from the Brandon Wheat Kings for 20 year-old Braydyn Chizen and a 5th round bantam pick. The team then claimed 20 year-old defenceman Matt Barberis off waivers last Thursday from the Vancouver Giants. To make room for Barberis, the team released overage forward Lane Lablocki, who is now with the BCHL’s Vernon Vipers.

Broadcasters Notebook: The team has been out-shot in 8 straight games…The Rockets are 5-7-0-0 in 12 games against a US Division team this season. Three of the four wins have come against Tri City with a single victory over Everett and Seattle…The team plays 8 more games against US Division rivals with four games against Spokane, two with Portland and a single against Everett and Seattle.…The Rockets have played 11-one goal games at home this season. Last year they played 15-one goal games at Prospera Place…The team has played in eight-one goal games on the road….The Rockets have seven birthday’s in January which include Liam Kindree (Jan 2nd), Kris Mallette (Jan 19th – turns 40), Matt Barberis (Jan 19th), Ethan Ernst and Dalton Gally (Jan 26th), Ted Brennan (Jan 28th) and Kaedan Korczak (January 29th)…The Rockets are sending a CHL high three players to the CHL/NHL Top Prospects Game in Red Deer. Nolan Foote (Team Cherry), Lassi Thomson/Kaedan Korczak (Team Orr) will attend the game of the top 40 prospects. The game will take place January 23rd…Leif Mattson has 5-two goal games this season. Four of those five-two goal games have come on the road…The Rockets are 7-10-2-1 against BC Division teams this season…Five members of the Kelowna Rockets have been named to NHL Central Scouting’s November “Players to Watch’ List. Forward Nolan Foote is an ‘A’ prospect, meaning a first round candidate. Kaedan Korczak is a ‘B’ prospect which means he is a second or third round candidate. Roman Basran/Lassi Thomson and Alex Swetlikoff are ‘C’ prospects, which means they could be taken in the third to the seventh round…Adam Foote was officially named the new head coach of the Kelowna Rockets on October 23, 2018 replacing Jason Smith.,,The Rockets are 5-10-1-0 when playing the second game of back-to-backs.