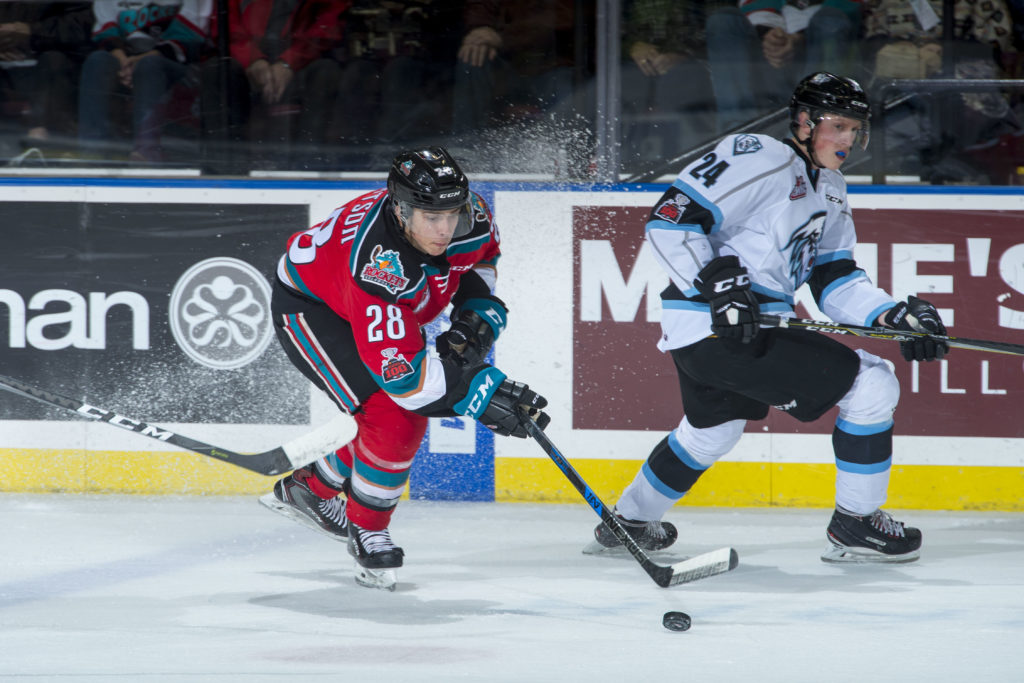 Game Day Preview: The Kelowna Rockets open a four-game road trip tonight against the Kootenay Ice. It is the lone meeting of the season between these two teams. These two organizations used to have classic playoff battles when the ICE played in the B.C. Division. These two franchises met in the Western Conference final in 2002, with the ICE winning in five games. It was so memorable because it marked the first time the Rockets franchise had been into the third round of the playoffs. In 2004, in the opening round, the Rockets eliminated the Ice in four straight. In the 2005 WCF, the Rockets eliminated the ICE in 6 games. In 2006, again in round one, the Rockets eliminated Kootenay in 6 games. That’s four playoff battles in the five seasons the ICE were in the B.C. Division before moving to the Central for the start of the 2006-2007 campaign. In the teams’ last appearance in Cranbrook, December 10, 2016, Jake Kryski scored twice in a 7-3 win. On January 31, 2015, Leon Draisaitl had 1+1 in the Rockets 5-1 victory.  Overall the Rockets have won 3 straight in Cranbrook, with their last loss coming February 22, 2011, in a 4-2 setback. Jordon Cooke faced 51 saves and was named the second star. The Rockets are 10-5-2-0 in 17 games under head coach Adam Foote.

Who’s Hot: Nolan Foote has points in 8 of his last 9 games. Foote has 7+5=12 over that stretch. Leif Mattson has four goals in his last 7 games. The 19-year-old has registered at least one shot on goal in 30 of the teams 31 games this season. Kyle Topping has registered a point in 23 of the teams 31 games this season. In his last four appearances, goaltender James Porter has stopped 113 of the last 122 shots (.926 save percentage) he has faced. The Rockets penalty killing unit is 15 for 15 in their last three road games.

Broadcasters Notebook: The Rockets made a change behind the bench Saturday, mutually agreeing to part ways with assistant coach Travis Crickard. Crickard joined the Rockets August 6, 2014, originally taking over from Kim Dillabaugh, who left the team to take a full-time position with the NHL’s LA Kings…The Rockets have acquired the playing rights to 17-year-old forward Alex Swetlikoff from the Lethbridge Hurricanes for a 4th round bantam pick. Swetlikoff, a Kelowna product, was originally drafted in the third round by the Seattle Thunderbirds. Lassi Thomson (Finland) and Libor Zabranski (Czech Republic) have been invited to the training camp for the upcoming World Junior Hockey Championships….The Rockets traded 19-year-old Jack Cowell to the Kootenay ICE November 29th for a third-round bantam pick. The trade was voided when Cowell failed to report… The Rockets are 6-8-1-0 against B.C. Division teams this season….The Rockets have only one December birthday to celebrate. Lane Zablocki officially turns 20 on December 27th….Four members of the Kelowna Rockets have been named to NHL Central Scouting’s November “Players to Watch’ List. Forward Nolan Foote is an ‘A’ prospect, meaning a first round candidate. Kaedan Korczak is a ‘B’ prospect which means he is a second or third round candidate. Roman Basran/Lassi Thomson are ‘C’ prospects, which means he could be taken in the third to the seventh round…Adam Foote was officially named the new head coach of the Kelowna Rockets on October 23, 2018, replacing Jason Smith.,,The Rockets are 3-7-1-0 when playing the second game of back-to-backs.