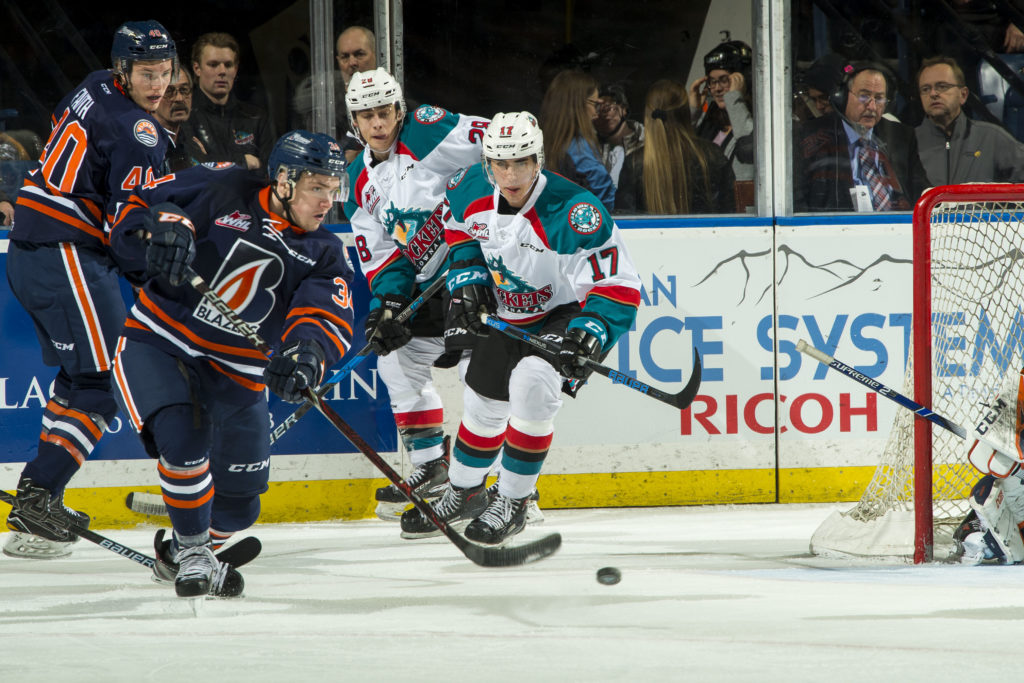 Game Day Preview: The Kelowna Rockets meet the Kamloops Blazers for the 5th time this season. These two teams met back on December 29th with the Rockets earning a 2-1 win. Overall, the Blazers have outscored the Rockets 11-6 in the opening four games. The Rockets power play is just 2 for 19 (10.5%) in the seasonal series. Leif Mattson leads the way with 2+1=3 in the four games. Both James Porter and Roman Basran have played in two games. Dylan Ferguson has started all four games for the Blazers and has a sparkling goals against average of 1.49 and a save percentage of .956. The Rockets are coming off a 2-1 shootout loss last night to the visiting Prince George Cougars. Connor Bruggen-Cate scored his first goal in 24 games in the setback. James Porter was solid with a 27 save performance. The Rockets were 1 for 3 on the power play. After tonight’s game, the Rockets welcome the Western Conference leading Everett Silvertips this Wednesday before travelling to Prince George for back-to-back games next Friday (Jan 11th) and Saturday (Jan 12th). The Rockets are 13-7-3-1 in 24 games under head coach Adam Foote.

Who’s Hot: Lassi Thomson has four assists in his last seven games…Nolan Foote has points in seven of his last 11 games. Foote has 4+6=10 over that stretch…Leif Mattson has eight goals in his last 14 games. The 19-year-old has registered at least one shot on goal in 37 of the teams 38 games this season. Kyle Topping has registered a point in 26 of the teams 38 games this season… The Rockets penalty killing unit is 33 for 36 in their last eight road games…The Rockets have points in 10 of their last 11 home games (8-1-2-0).

Approaching Personal Bests: Liam Kindree is one point shy of the career-high 27 points he put up last season. Kindree has 7+19=26 this season after accumulating 8+19=27 in 50 games a season ago…Nolan Foote has is one 19 goals this season, the same career high he had as a WHL rookie two seasons ago.

Broadcasters Notebook: The team has played 11-one-goal games at home this season. Last year they played 15-one-goal games at Prospera Place…the team has played in 7-one-goal games on the road. After this weekend, the Rockets will play 10 games in 21 days starting next Wednesday against Everett to close out January…The Rockets have six birthday’s in January which includes Liam Kindree (Jan 2nd), Kris Mallette (Jan 19th – turns 40), Ethan Ernst and Dalton Gally (Jan 26th), Ted Brennan (Jan 28th) and Kaedan Korczak (January 29th)…Alex Swetlikoff made his WHL debut last Friday in Kamloops…The Rockets are sending a CHL high three players to the CHL/NHL Top Prospects Game next month in Red Deer. Nolan Foote, Lassi Thomson and Kaedan Korczak will attend the game of the top 40 prospects. The game will take place January 23rd…Since going 1-8-0-0 to start the season, the team is 16-9-3-1 in their last 29 games….Kyle Topping’s goal last Saturday was the 50th of his career…Leif Mattson has 5-two-goal games this season. Four of those five-two goal games have come on the road…The Rockets added 17-year-old forward Alex Swetlikoff to the roster. The Kelowna resident was acquired from the Lethbridge Hurricanes for a 4th round bantam pick. Swetlikoff was originally drafted in the third round by the Seattle Thunderbirds.….The Rockets are 7-8-2-1 against BC Division teams this season…Five members of the Kelowna Rockets have been named to NHL Central Scouting’s November “Players to Watch’ List. Forward Nolan Foote is an ‘A’ prospect, meaning a first-round candidate. Kaedan Korczak is a ‘B’ prospect which means he is a second or third round candidate. Roman Basran/Lassi Thomson and Alex Swetlikoff are ‘C’ prospects, which means he could be taken in the third to the seventh round…Adam Foote was officially named the new head coach of the Kelowna Rockets on October 23, 2018, replacing Jason Smith.,,The Rockets are 5-8-1-0 when playing the second game of back-to-backs.