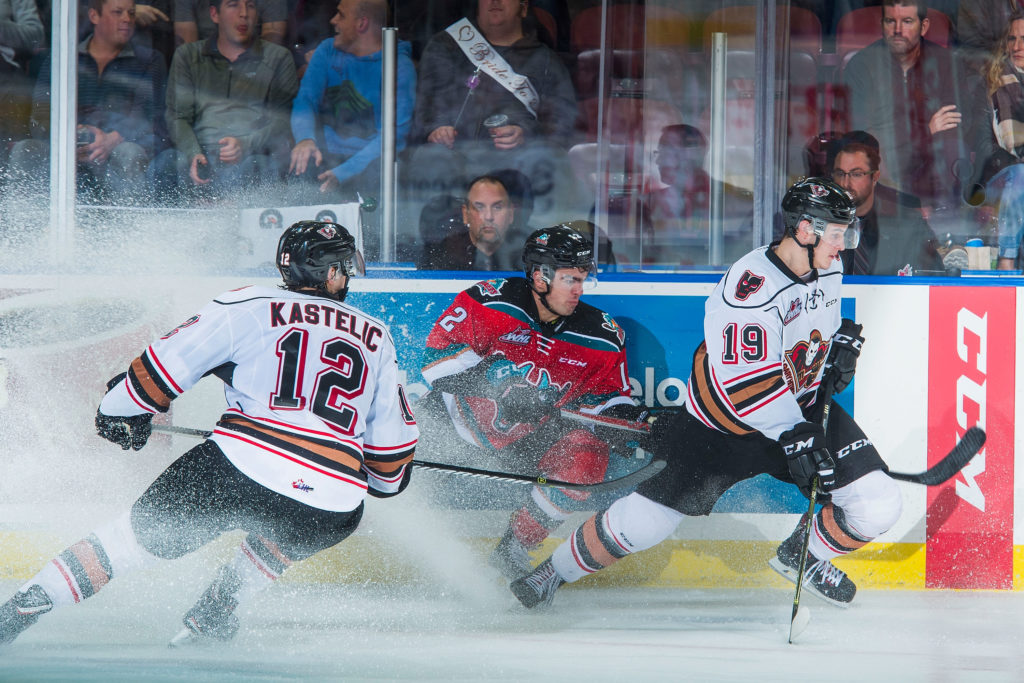 Game Day Preview: Welcome to the halfway point of the season for the Kelowna Rockets. This is game #34. The Rockets play game three of four straight on a Central Division road trip. The Rockets are 1 and 1 after a 3-1 victory Tuesday over the Kootenay Ice before suffering a 5-1 loss in Lethbridge Wednesday night. In the game against the Ice, Leif Mattson scored twice on the power play in the two-goal win. James Porter made 28 saves in the victory. Against the Hurricanes, Liam Kindree found the back of the net for his 7th goal of the season in the four-goal loss. Roman Basran took the loss in goal. Of the four goals the team has scored on the trip, all four have come on the power play. Tonight’s game against the Hitmen is the lone meeting of the season between these two teams. The Rockets are 6-4-0-0 in their last 10 appearances at the ‘Dome’ including a 3-1 victory on January 7, 2018. James Hilsendager was named the first star with a goal and an assist. The Rockets are in Medicine Hat tomorrow night to close out the first half of the season. The Rockets are 11-6-2-0 in 19 games under head coach Adam Foote.

Who’s Hot: Nolan Foote had his 6 game point streak snapped Wednesday night. Foote had 3+5=8 over that stretch…Leif Mattson has 6 goals in his last 9 games. The 19-year-old has registered at least one shot on goal in 32 of the teams 33 games this season. Kyle Topping has registered a point in 24 of the teams 33 games this season. Topping had a five-game point streak come to an end Wednesday. Topping had 2+5=7 over that period…In his last 6 appearances, goaltender James Porter has stopped 141 of the last 151 shots (.933 save percentage) he has faced. The Rockets penalty killing unit is 21 for 21 in their last five road games.

Broadcasters Notebook: The Rockets face a former teammate tonight. Jake Kryski, now 20, is the Hitmen’s second-leading point producer (14+19=33). Kryski played 37 games for the Rockets in the 2016-2017 season before being dealt to the Hitmen for Carsen Twarynski. Twarynski, a year older than Kryski, would score a career-high 45 goals last season…The Rockets have the 9th fewest power play chances (125) in the WHL, yet are the fourth most penalized team behind only Seattle, Portland and Kamloops….Kyle Topping’s next goal will be the 50th of his career…Leif Mattson has 4 two-goal games this season. Three of those four two-goal games have come on the road…The team has added 15-year-old Jackson Desouza to the roster for this road trip. The fourth round WHL Bantam pick in May is playing this season with the Okanagan Rockets of the BCMMHL…The Rockets have acquired the playing rights to 17-year-old forward Alex Swetlikoff from the Lethbridge Hurricanes for a 4th round bantam pick. Swetlikoff, a Kelowna product, was originally drafted in the third round by the Seattle Thunderbirds.…Lassi Thomson (Finland) and Libor Zabranski (Czech Republic) have been invited to the training camp for the upcoming World Junior Hockey Championships….The Rockets traded 19-year-old Jack Cowell to the Kootenay Ice November 29th for a third-round bantam pick. The trade was voided when Cowell failed to report… The Rockets are 6-8-1-0 against BC Division teams this season….The Rockets have only one December birthday to celebrate. Lane Zablocki officially turns 20 on December 27th….Four members of the Kelowna Rockets have been named to NHL Central Scouting’s November “Players to Watch’ List. Forward Nolan Foote is an ‘A’ prospect, meaning a first-round candidate. Kaedan Korczak and Lassi Thomson are ‘B’ prospects which means they’re a second or third round candidate. Roman Basran is a ‘C’ prospect, which means he could be taken in the third to the seventh round…Adam Foote was officially named the new head coach of the Kelowna Rockets on October 23, ,2018 replacing Jason Smith.,,The Rockets are 3-8-1-0 when playing the second game of back-to-backs.