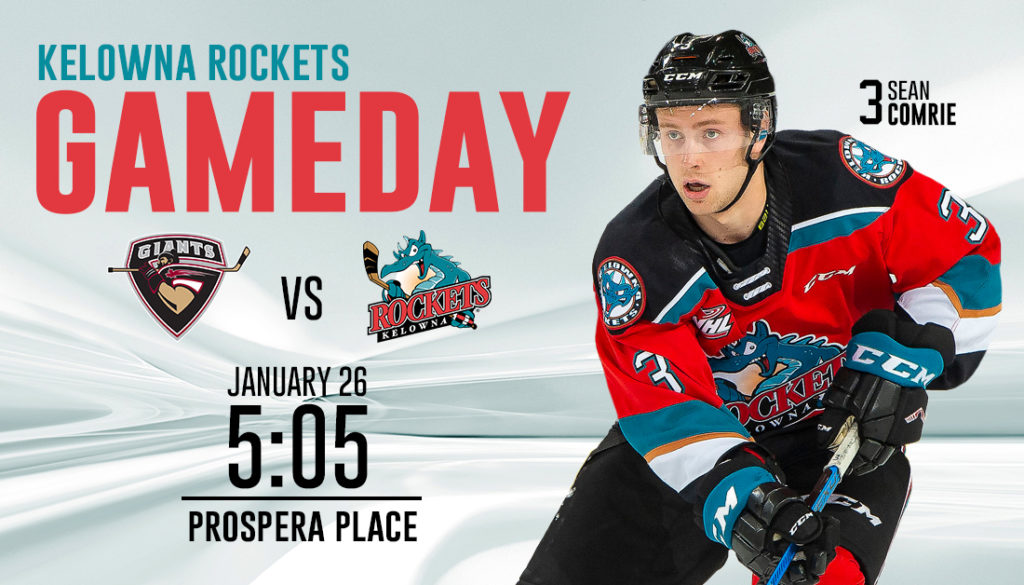 Tonight’s Preview: The home-and-home series shifts back to Kelowna today, Kaedan Korczak scored the overtime winner last night at the Langley Events Centre. Matthew Wedman, the OT hero from Friday, opened the scoring. Jonas Peterek tied the game in the third, redirecting home Topping’s pass. Roman Basran made 30 saves in the win. The Giants will visit Prospera Place for the third time this season. They’re 1-1 when Vancouver visits Prospera this season, losing 4-3 on December 18 and winning 3-2 in the shootout on January 4. In the seasonal series, the Rockets are 2-3-0-0.  After tonight’s game, the Rockets enjoy 6 of their next 7 games on home ice. The only road game over that period is next Saturday when they visit the Spokane Chiefs.

Rockets Return: The Rockets welcomed six regulars to the lineup last night. Kyle Topping was back after a 30 game absence with a broken ankle. Topping was hurt October 30th Victoria. Mark Liwiski had missed eight games while Trevor Wong, Sean Comrie and Roman Basran also returned. Nolan Foote remains week to week while Liam Kindree is out with a long-term injury.

Broadcasters Notebook: The Rockets are playing their 47th game of the season tonight, meaning only 21 games remain on the schedule…Matthew Wedman is four games shy of 300 for his career….The Rockets are 8-4-0-0 against teams in the US Division….The Rockets are now 19-5-0-0 when scoring the games first goal…Kaedan Korczak returned to the lineup on Friday after serving a three-game suspension …Liam Kindree has been sidelined for an extended period of time after a hit against Kamloops which required surgery on his broken collarbone …. The Rockets were 5-7-0-0 while Nolan Foote was at the World Junior Hockey Championships …The Rockets have played in 25-1 goal games this season, the most in the WHL…The Rockets are 10-13-1-1 against teams in the BC Division…The Rockets are 6 and 1 in overtime with game-winning goals coming from Matthew Wedman, Dillon Hamaliuk, Nolan Foote, Kaedan Korczak x 2 and Liam Kindree….Head Coach Adam Foote is closing in on a milestone. Foote will coach in his 100th game Sunday, at home, vs. Vancouver.