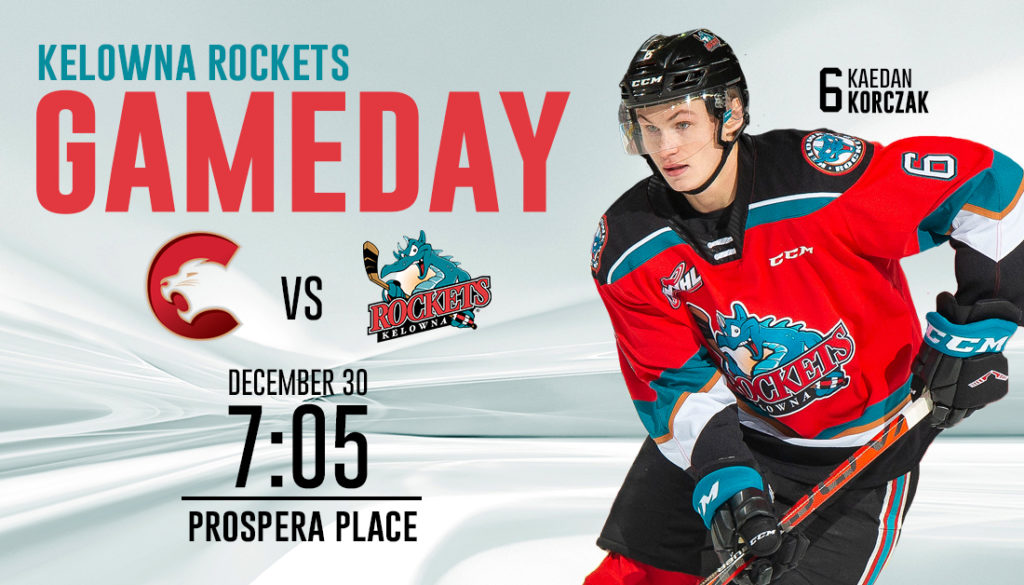 Tonight’s Preview: The Kelowna Rockets close out the 2019 calendar year with a date against the Prince George Cougars. The Rockets and Cougars are meeting for the 6th time this season. The Rockets are 4-1-0-0 in the opening five games, having out-scored their BC Division cousins 16-11. The Cougars make one more appearance at Prospera Place March 18th while the Rockets head up to CN Centre one final time for back-to-back games February 25th and 26th. The Rockets have lost three in a row after a 6-2 setback Saturday in Vancouver. Liam Kindree scored both goals in the team’s 20th road game of the season. The loss came on the heels of a 4-0 shutout loss to the Kamloops Blazers last Friday. Following tonight’s game, the Rockets ring in the New Year, January 3rd, against the visiting Victoria Royals before welcoming Vancouver Saturday before closing out the weekend Sunday, January 5th in Tri-City against the Americans.

Broadcasters Notebook: Liam Kindree’s two goals Saturday in Vancouver (Langley) was the first two-goal game of his career….Nolan Foote leads the team with 10 points (5+5=10) in the seasonal series against Prince George….Pavel Novak has 7 points (2+5=7) in the five games….Roman Basran started all five games against the Cougars, posting a goals-against-average of 1.81 with a save percentage of .938…Forward Matthew Wedman leads the WHL in penalty minutes with 68 followed by teammate Mark Liwiski with 64… Nolan Foote is playing for Canada at the World Junior Hockey Championships, becoming the 18th player in the organization to do so….10 of the Rockets last 13 games have been decided by one goal…The Rockets have played in 18-1 goal games this season, the most in the WHL….Nolan Foote was named the 25th captain in franchise history (Tacoma/Kelowna) October 18th…The Rockets have played in a Western Conference high 20 road games.

Elder Statesmen Added: Matthew Wedman was acquired in a trade with Seattle December 5th, showcased his talents in front of the home town faithful for the first time on December 18th. The 20-year-old led the T-Birds in scoring last season with 40+37=77 and played 275 games in a Seattle uniform. Twenty-year-old d-man Conner McDonald also made his debut December 18th with three assists in a 4-3 loss to visiting Vancouver. McDonald was obtained from the Edmonton Oil Kings. McDonald scored 19 goals back on the blue-line last season, which was the second-highest total only behind Giants rearguard Bowen Byram