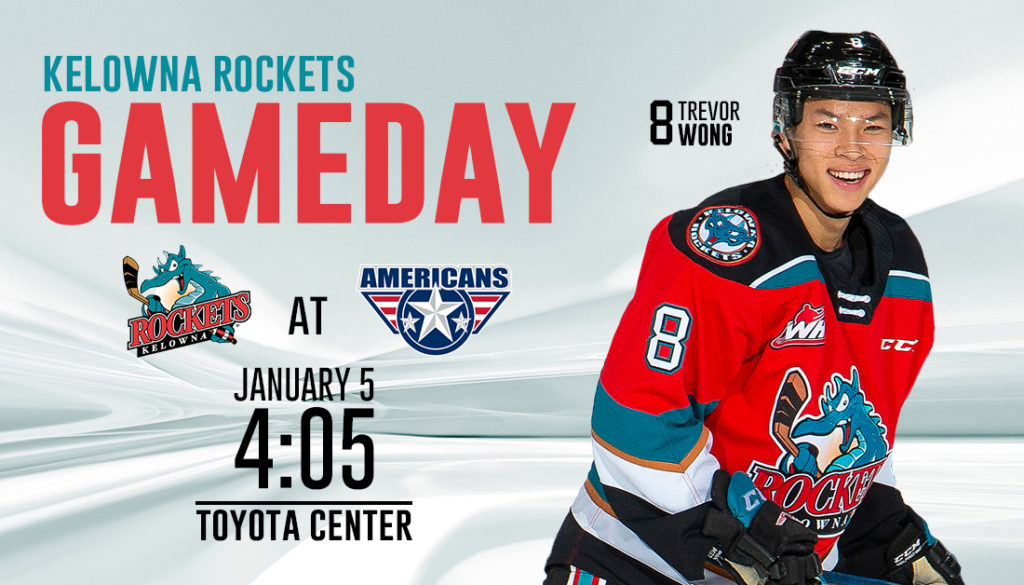 Tonight’s Preview: The Rockets will wrap up their three-game weekend against the Tri-City Americans this afternoon. Kelowna has already faced the Ams twice this season, winning both contests. Pavel Novak collected his first WHL goal against Tri-City in the season series opener on October 2 where the Rockets zipped past the Americans 6-1. Their last meeting was much closer, a 2-1 Kelowna win.

The Rockets are coming off a 3-2 shootout win last night over the Tri-City Americans. Liam Kindree and Pavel Novak scored in regulation while Matthew Wedman and Conner McDonald lit the lamp in the skills competition. Back in late September, the Rockets played three games in three nights, losing in overtime in Kamloops (3-2), beating Everett at home (5-1) before losing (4-0) in Vancouver.

Broadcasters Notebook: The Rockets will play three games in three nights three times this month. They do it again January 17th, 18th and 19th before doing it again January 24th, 25th and 26th …Liam Kindree has three goals in his last four games….Nolan Foote is playing for Canada at the World Junior Hockey Championships, becoming the 18th player in the organization to do so…12 of the Rockets last 15 games have been decided by one goal…The Rockets have played in 21-1 goal games this season, the most in the WHL…The Rockets have played in a Western Conference high 21 road games.

Digg’n Deep:  Liam Kindree has four goals in as many games….Roman Basran has started in 6 of the teams last 7 games….The Rockets are 6-0-0-0 against teams in the US Division…The Rockets are 4 and 1 in overtime with game-winning goals coming from Dillon Hamaliuk, Nolan Foote, Kaedan Korczak and Liam Kindree….Head Coach Adam Foote is closing in on a milestone. Foote will coach in his 100th game January 25th, on the road, in Vancouver (Langley)….Dillon Hamaliuk plays in his 150th WHL game this evening…Connor McDonald is 5 assists shy of 100 for his career