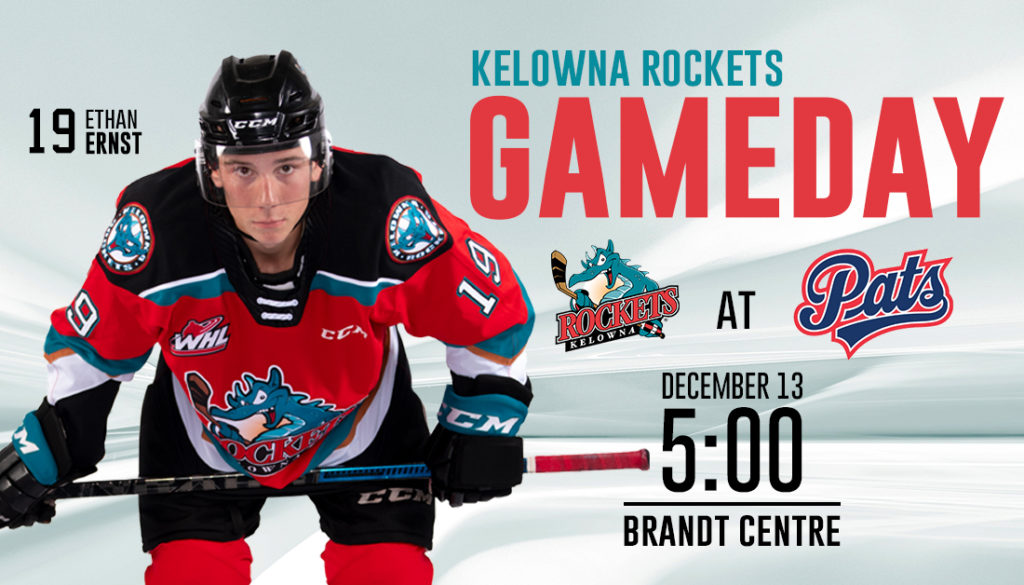 Tonight’s Preview: The Kelowna Rockets play game five of a six-game Eastern Division road trip tonight in Regina against the Pats. These two teams met once last season, in Kelowna, with the Rockets earning a 3-2 win. Nolan Foote has two goals in the victory. The Rockets have won 5 straight games at the Brandt Centre, including a 7-5 victory December 8, 2017 in their last visit.  The last loss from the Rockets, in Regina, came way back on December 9, 2007 in a 4-3 setback. The Rockets are 3-1-0-0 on this Eastern Division road swing after a 2-1 win last Friday in Prince Albert followed by a 4-3 shootout victory in Saskatoon last Saturday. Then in Brandon, Tuesday, the Rockets were a 2-1 shootout winner followed by a 3-1 loss in Winnipeg on Wednesday. The Rockets have points in 9 of their last 10 games (8-1-0-1) and have won 5 of their last 6 games on the road. The Rockets have played 15-1 goal games this season including in 7 of their last 8 where they are (6-0-0-1).

Bigger, Faster, Stronger: The team added size and scoring touch with the acquisition of 20-year-old Matthew Wedman from the Seattle Thunderbirds December 5th. Wedman led the T-Birds in scoring last season with 40+37=77 and played 275 games in a Seattle uniform. The Rockets also completed a trade with the Moose Jaw Warriors November 24th by acquiring 20-year-old Jadon Joseph. Joseph was a member of the Vancouver Giants last season that went all the way to the WHL final. Joseph has 58 games of playoff experience under his belt, the most on the Rockets roster.

Broadcasters Notebook: The Rockets are playing without four of their top forwards. Nolan Foote, Dillon Hamaliuk, Liam Kindree and Kyle Topping will not play tonight against the Pats. Only Foote has played (two games) on this road trip…The Rockets dealt 20-year-old Leif Mattson to Spokane last Thursday for a third-round bantam pick….The Rockets traded 18-year-old d-man Cayde Augustine to Moose Jaw December 2nd for a conditional 6th round bantam pick….Roman Basran was named the WHL Eli Wilson goaltender of the week in back-to-back weeks ending December 1st…Nolan Foote was named the 25th captain in franchise history (Tacoma/Kelowna) October 18th. Foote joins brother Cal, who captained the Rockets during the 2017-2018 season. Foote is attempting to crack Canada’s entry at the upcoming World Junior Hockey Championships. The tournament will be played in the Czech Republic.