THE WESTERN HOCKEY LEAGUE HAS ANNOUNCED ITS RETURN TO PLAY PROTOCOL FOR THE 2020-21 SEASON, CLICK HERE TO LEARN MORE
THE ROCKETS ONLINE STORE AND STORE IN PROSPERA PLACE ARE TEMPORARILY CLOSED
January 18, 2020 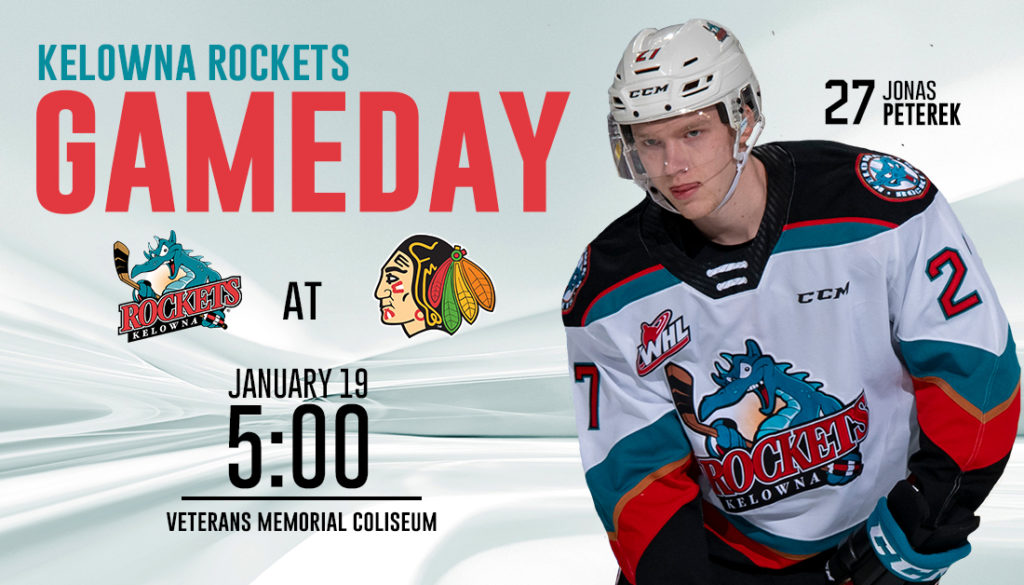 Tonight’s Preview: The Kelowna Rockets play game three of a U.S. Division road trip tonight when they face the Portland Winterhawks. This is the second of four meetings between these two teams this season. They’ll close out the seasonal series with a doubleheader at Prospera Place February 7th and 8th. This is the 10th straight season the Rockets have played games in Portland on back-to-back nights. It all started in 2010-2011. Last season the Rockets were 1-2-1-0, with two losses coming in Portland by scores of 3-0 and 4-2. The Rockets next home game is Friday, January 24th against the visiting Seattle Thunderbirds.

Broadcasters Notebook: The Rockets are in the middle of playing 9 of 11 games against teams based in the US Division….The Rockets and Winterhawks haven’t met in the WHL playoffs since 2017. In that second-round playoff series, the Rockets prevailed in five games and advanced to the Western Conference final before being eliminated by eventual WHL champion Seattle….Kaedan Korczak serves game three of a three-game suspension for his involvement in the third period of last Saturday’s game against Kamloops…The Rockets were fined $3,000 dollars for actions in that game, which featured 18 fighting majors…The Rockets have called up goaltender Cole Tisdale from the Camrose Kodiaks of the AJHL. Tisdale was the Rockets 8th round pick from the 2017 WHL bantam draft and played five games with the team as an emergency call-up in 2017-2018…Liam Kindree has been sidelined for an extended period of time after a hit against Kamloops last Saturday. The 19-year-old is out with an upper-body injury for over a month ….The Rockets acquired Jonas Peterek from the Calgary Hitmen at the trade deadline for a 5th round WHL bantam pick. Peterek had played 32 games with the Hitmen this season, scoring 8 games and collecting 8 assists….The Rockets acquired 18-year-old d-man Tyson Feist last Wednesday from the Regina Pats for a 4th round pick.….The Rockets were 5-7-0-0 while Nolan Foote was at the World Junior Hockey Championships …The Rockets have played in 22-1 goal games this season, the most in the WHL…The Rockets are 9-13-1-1 against teams in the BC Division…The Rockets are 4 and 1 in overtime with game-winning goals coming from Dillon Hamaliuk, Nolan Foote, Kaedan Korczak and Liam Kindree….Head Coach Adam Foote is closing in on a milestone. Foote will coach in his 100th game January 26th, at home, vs. Vancouver.