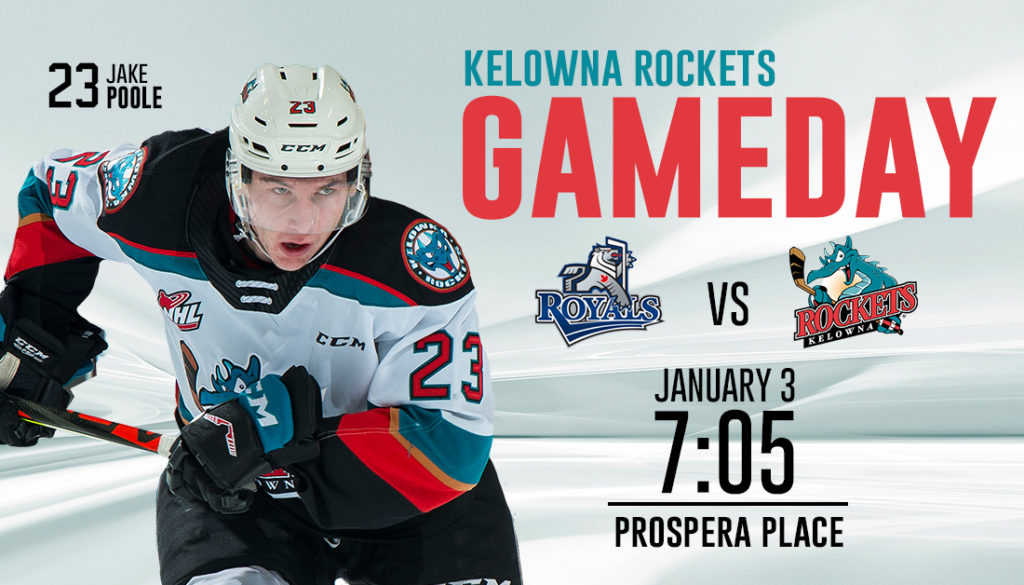 Tonight’s Preview: Happy New Year! The Kelowna Rockets ring in 2020 with a home game against the Victoria Royals. This is the 5th meeting of the season between the two teams, with the Rockets sporting a record of 2-1-0-1 in the opening four games. The Royals lead the Rockets by one point for second place in the BC Division and have one game in hand. The fourth-place Vancouver Giants sit 5 points back of the Rockets for third place in the division. Those two teams hook up tomorrow. The Rockets are playing three games in three nights for the second time this season. The team is in Tri-City on Sunday (4:05 pm). Back in late September, the Rockets played three games in three nights, losing in overtime in Kamloops (3-2), beating Everett at home (5-1) before losing (4-0) in Vancouver.

Broadcasters Notebook: The Rockets will play three games in three nights three times this month. They do it again January 17th, 18th and 19th before doing it again January 24th, 25th and 26th …Kaiden Korczak leads the Rockets with 1+3=4 in the four games vs. Victoria…Pavel Novak and Alex Swetlikoff each have two goals in the seasonal series…..Both teams have scored 11 goals in the series…..Liam Kindree has three goals in his last three games….Nolan Foote is playing for Canada at the World Junior Hockey Championships, becoming the 18th player in the organization to do so….Nolan Foote has three goals for Canada at this year’s event. The most goals scored by a Rockets player for Canada at the WJ’s was Chuck Kobasew, who found the back of the net five times at the 2002 tournament in the Czech Republic…11 of the Rockets last 14 games have been decided by one goal…The Rockets have played in 19-1 goal games this season, the most in the WHL…The Rockets have played in a Western Conference high 20 road games.

Elder Statesmen Added: Matthew Wedman was acquired in a trade with Seattle December 5th, showcased his talents in front of the home town faithful for the first time on December 18th. The 20-year-old led the T-Birds in scoring last season with 40+37=77 and played 275 games in a Seattle uniform. Twenty-year-old d-man Conner McDonald also made his debut December 18th with three assists in a 4-3 loss to visiting Vancouver. McDonald was obtained from the Edmonton Oil Kings. McDonald scored 19 goals back on the blue-line last season, which was the second-highest total only behind Giants rearguard Bowen Byram.