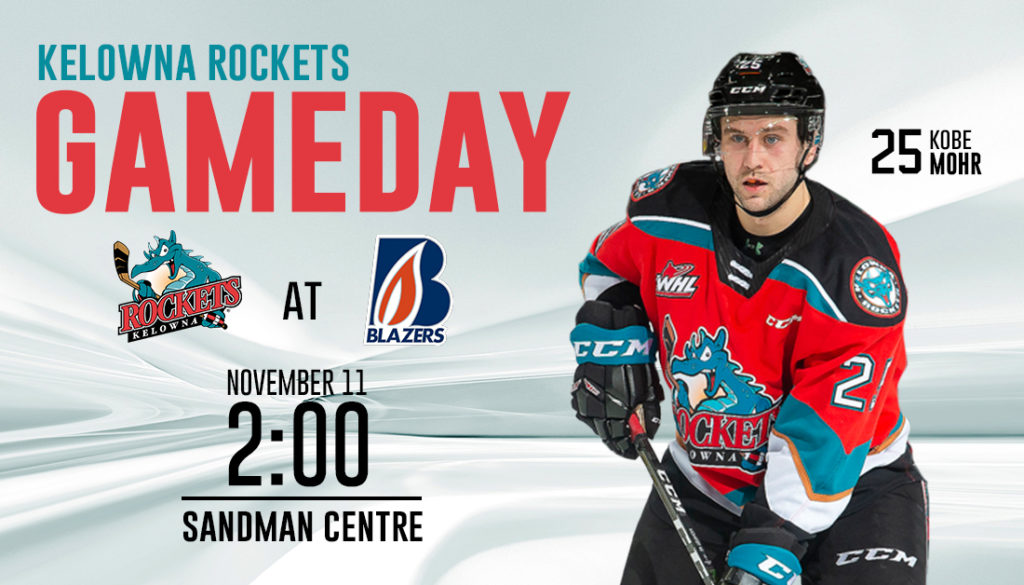 Today’s Preview: The Kelowna Rockets will try to snap a season-high three-game losing streak this afternoon against the Kamloops Blazers. This is the fourth meeting of the season between the two teams with the Rockets sporting a record of 0-2-1-0 in the opening three games, having been out-scored 10-5 in the process. After this matinee affair, the two teams meet again this Saturday at Prospera Place. Over the last five seasons, the home team has dominated the seasonal series. The Rockets are 10-5-0-0 at Prospera Place yet are 6-8-2-1 at Sandman Centre. Kyle Topping, Liam Kindree, Nolan Foote and Leif Mattson lead the team in scoring in the seasonal series against the Blazers with two points each. Foote has yet to score a goal in the three games. The Rockets are coming off a 6-1 loss in Spokane Saturday night. Mark Liwiski scored the lone goal in the loss. The Rockets surrendered a season-high 55 shots on goal in that game.

Player Move: The Rockets solidified the goaltending situation, sending 19-year-old James Porter to the Vernon Vipers of the BCHL. Porter was beat out for the backup job by 18-year-old Cole Schwebius. Porter played in 72 regular-season games with the Rockets but was a healthy scratch for all 15 games this season.

CONTEST ONLY OPEN TO BC RESIDENTS

Who’s Hot: The Rockets own the second-best power-play unit in the WHL with 20 goals this season. Only Medicine Hat and Kamloops (21) have scored more times…Alex Swetlikoff has goals in three of his last four games…Nolan Foote is riding a four-game point streak (2+5=7)…Pavel Novak has points in 5 of his last 6 games (4+3=7). Novak leads the WHL in rookie scoring with 10+11=21…Leif Mattson has three goals in his last four games.

Broadcasters Notebook: Kobe Mohr plays his first game against his old team this afternoon. The 20-year-old played 73 regular-season games with the Blazers and was in the lineup against Kelowna back on September 27th….Leif Mattson is four games shy of 200 for his career….Equipment Manager Chaydyn Johnson has returned from the World Under 17 Hockey Challenge in Medicine Hat/Swift Current. Johnson was behind the bench of Team Red which placed 5th…Nolan Foote, Dillon Hamaliuk and Kaedan Korczak will play for Team WHL this week in the Canada-Russia Series. The games are Wednesday and Thursday in Prince Albert and Saskatoon…Pavel Novak is a ‘C’ prospect for next June’s NHL Draft. Those rankings released by NHL Central Scouting. A ‘C’ prospect is regarded as a player selected between the 5th and 7th round. The 2020 NHL Entry Draft will be held in Montreal.