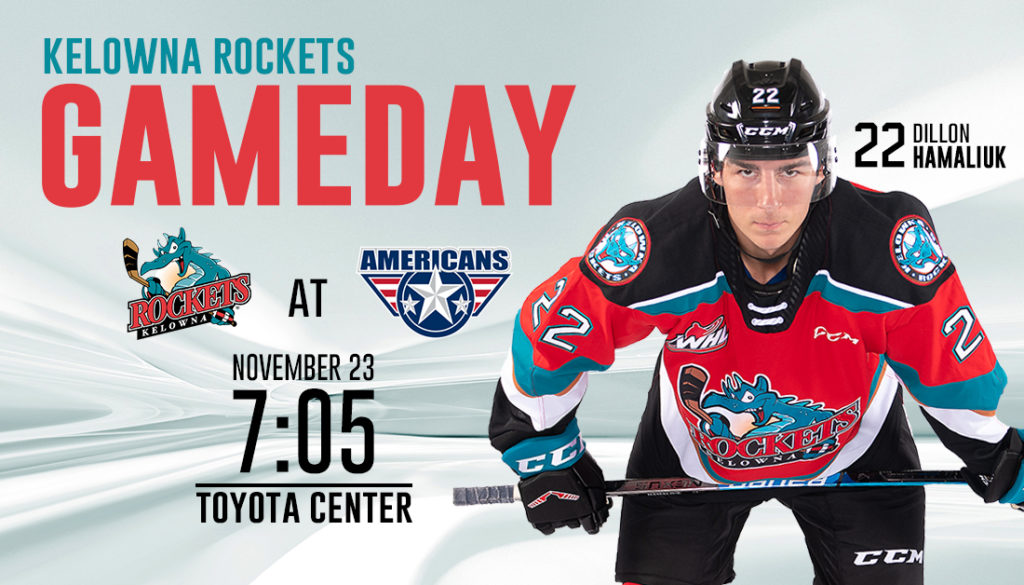 Tonight’s Preview: The Kelowna Rockets and Tri-City Americans meet for the second time this season. Back on October 2nd the Rockets were a 6-1 winner. Nolan Foote had 1+3 while Pavel Novak and Dillon Hamaliuk each had 1+2=3 in the lopsided win. The Rockets outshot the Americans 42-20. The Rockets make a return visit to the Toyota Center on January 5th. The Americans are back in Kelowna February 12th. The only US Division team the Rockets haven’t met this season are the Portland Winterhawks. After this game, the Rockets host Edmonton Tuesday night before the Teddy Bear Toss game a week from tonight against the visiting Prince George Cougars.

Broadcasters Notebook: Michael Farren played in his 200th career game last Saturday against Kamloops…Pavel Novak is serving game 4 of an 8 game suspension issued by the WHL for a checking from behind major and game misconduct penalty. Novak won’t return until December 10th against Brandon…Leif Mattson played in his 200th career game last night in Seattle…Nolan Foote, Dillon Hamaliuk and Kaedan Korczak played for Team WHL in the Canada-Russia Series. Foote had an assist on the tying goal in Team WHL’s 2-1 overtime victory. Then in the rematch, Nolan Foote scored twice in regulation time and then the shootout winner in a 4-3 victory.

Player Move: The Rockets solidified the goaltending situation, sending 19-year-old James Porter to the Vernon Vipers of the BCHL. Porter was beat out for the backup job by 18-year-old Cole Schwebius. Porter played in 72 regular-season games with the Rockets but was a healthy scratch for all 15 games this season.

CONTEST ONLY OPEN TO BC RESIDENTS

Puck drop is set for 7:05 pm. You can listen to the game on AM 1150, watch on WHL Live or follow the Rockets Twitter for live updates.