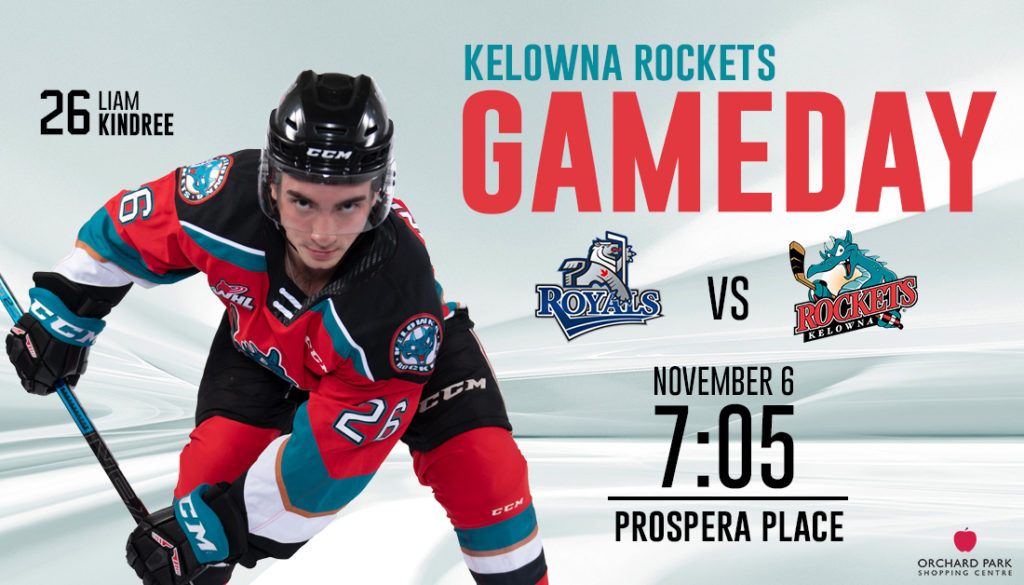 Tonight’s Preview: The Kelowna Rockets look to continue their winning ways tonight on home ice against the visiting Victoria Royals. The Rockets are 5 and 1 on home ice this season, with the only setback being a 5-2 loss to the Kamloops Blazers. Overall, the Rockets have out-scored the opposition 26-14 at Prospera Place and are one of only two teams in the Western Conference with only one home-ice loss. The other is the Portland Winterhawks. The Rockets and Royals are meeting for the third time in 9 days, after completing a two-game series in Victoria last Tuesday and Wednesday. The Royals were a 4-3 shootout winner before the Rockets rebounded with a 1-0 shutout win. After tonight, these two teams meet again November 20th.  Following tonight’s game, the Rockets host Medicine Hat Friday before travelling to Spokane to face the Chiefs Saturday followed by a road date in Kamloops on Monday, November 11th – Remembrance Day.

Player Move: The Rockets solidified the goaltending situation, sending 19-year-old James Porter to the Vernon Vipers of the BCHL. Porter was beaten out for the backup job by 18-year-old Cole Schwebius. Porter played in 72 regular-season games with the Rockets but was a healthy scratch for all 15 games this season.

Broadcasters Notebook: Equipment Manager Chaydyn Johnson is a member of the off ice staff for the World Under 17 Hockey Challenge in Medicine Hat and Swift Current, November 2nd to 9th. Johnson is behind the bench of Team Red ….Nolan Foote, Dillon Hamaliuk and Kaedan Korczak have been named to Team WHL for the upcoming Canada-Russia Series later this month. Those three will compete in two games against the touring Russian Selects in games in Prince Albert and Saskatoon…Roman Basran has started in 12 of 15 games this season…The Rockets are 4-4-1-1 in 10 attempts against BC Division teams this season, with three wins over Prince George and a victory over the Victoria Royals.

Purchase the Hat-Trick Wednesday deal from Select Your Tickets before 2:00pm on game day to receive a pop, a hotdog and your ticket for $19.99 plus fees. Tickets are on sale at selectyourtickets.com, at the Prospera Place box office or by phone at 250-762-5050