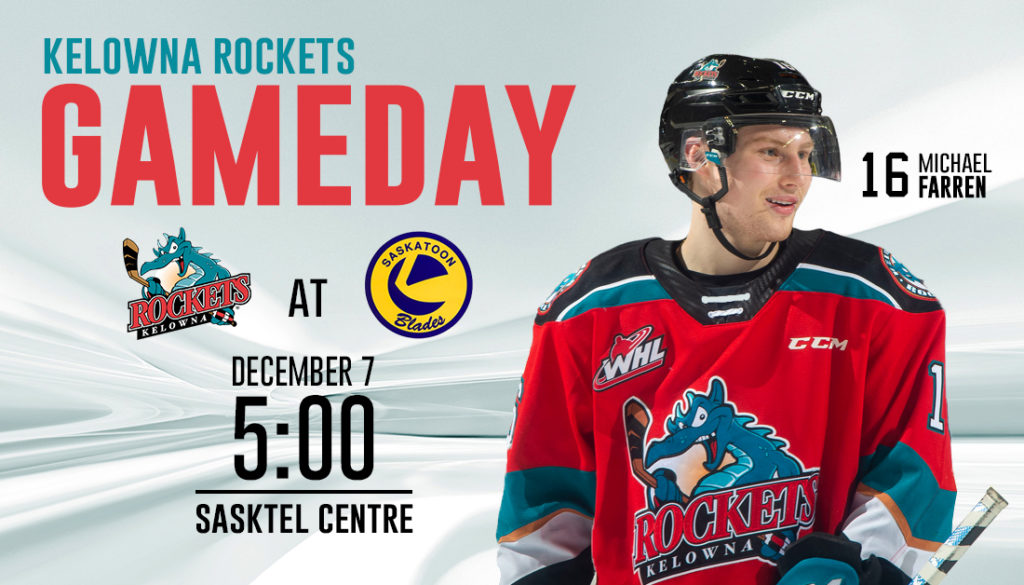 Tonight’s Preview: The Kelowna Rockets play game two of a six-game Eastern Division road trip tonight in Saskatoon against the Blades. The Rockets have points in 7 games (6-0-0-1) after a 2-1 win last night in Prince Albert. Dallon Wilton (2) and Nolan Foote (14) scored in the team’s 15th win of the season and 7th on the road. Roman Basran made 26 saves and was named the first star. The Rockets were 1 for 8 on the power play. After tonight’s game, the Rockets visit Brandon Tuesday and Winnipeg Wednesday night.

Big, Faster, Stronger: The team added size and scoring touch with the acquisition of 20-year-old Matthew Wedman from the Seattle Thunderbirds Thursday. Wedman had an assist on the game-winning goal in his debut last night. Wedman led the T-Birds in scoring last season with 40+37=77 and played 275 games in a Seattle uniform.

J.J Joins Rockets: The Rockets completed a trade with the Moose Jaw Warriors November 24th by acquiring 20-year-old Jadon Joseph. Joseph was a member of the Vancouver Giants last season that went all the way to the WHL final. Joseph has 58 games of playoff experience under his belt, the most on the Rockets roster.

Broadcasters Notebook: Michael Farren returns to the team he broke into the WHL with after being listed by the Blades. Farren played 133 games with Saskatoon before being dealt to Kelowna October 11,2018….The Rockets traded 18-year-old d-man Cayde Augustine to Moose Jaw December 2nd for a conditional 6th round bantam pick…The Rockets have three players with links to Saskatchewan. Kaedan Korczak was born in Yorkton, Carsen Sass in Melville while Ethan Ernst is from Weyburn….Roman Basran was named the WHL Eli Wilson goaltender of the week in back-to-back weeks ending December 1st.  Basran was 1-0-0-1 last week, with a goals-against-average of 0.96 while stopping 46 of 48 shots…Pavel Novak is serving the final game of an 8 game suspension issued by the WHL for a checking from behind major and game misconduct penalty. Novak won’t return until December 10th against Brandon…Nolan Foote was named the 25th captain in franchise history (Tacoma+Kelowna) October 18th. Foote joins brother Cal, who captained the Rockets during the 2017-2018 season. Foote has been invited to Hockey Canada’s training camp (Dec 9th to Dec 12th) next week for the World Junior Hockey Championships. The tournament will be played in the Czech Republic.