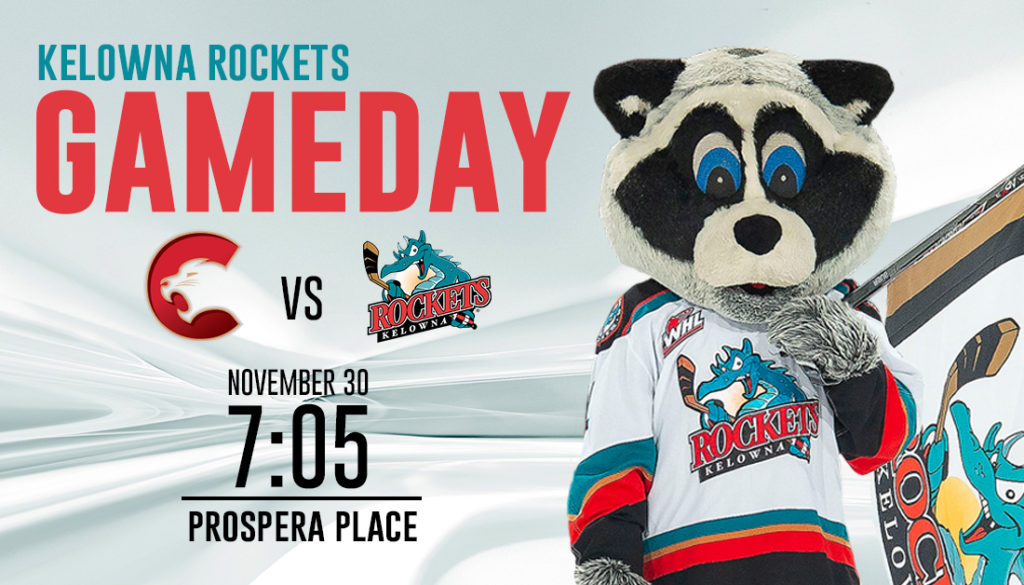 Tonight’s Preview: It’s Teddy Bear Toss Night at Prospera Place. Who scores the opening goal is anyone’s guess, but it does come with a certain amount of bragging rights. Just ask Mark Liwiski, last season’s goal-getter. The Rockets face the Prince George Cougars tonight in the 5th meeting of the season between the two teams. The Rockets are 3-1-0-0 in the four games, including a 6-2 win on November 1st. The Rockets have points in five straight games (4-0-0-1) after a 1-0 shootout loss Tuesday night to the visiting Edmonton Oil Kings. The 1-0 loss on home ice was the first time the Rockets have lost by that score since a 1-0 setback at Prospera Place to the Chilliwack Bruins on March 4, 2011. Following tonight’s game, the Rockets depart on an Eastern Conference road trip with a stop in Prince Albert Friday, December 6th followed by a date with the Saskatoon Blades a week from tonight on Saturday, December 7th. The team will play six games in 9 nights.

J.J Joins Rockets: The Rockets completed a trade with the Moose Jaw Warriors November 24th by acquiring 20-year-old Jadon Joseph. Joseph was a member of the Vancouver Giants last season that went all the way to the WHL final. The right-handed centreman also helped Lethbridge to the Eastern Conference final two years ago. Joseph has 58 games of playoff experience under his belt, the most on the Rockets roster.

Broadcasters Notebook: Roman Basran was named the WHL Eli Wilson goaltender of the week ending November 24th. Basran was 2-0-0-0, with a goals-against-average of 1.00 while stopping 50 of 52 shots…Michael Farren played in his 200th career game November 16th against Kamloops…Pavel Novak is serving game 6 of an eight game suspension issued by the WHL for a checking from behind major and game misconduct penalty. Novak won’t return until December 10th against Brandon…Leif Mattson played in his 200th career game November 22nd in Seattle…Dillon Hamaliuk signed an entry-level contract with the San Jose Sharks October 25th. Hamaliuk was chosen in the 2nd round by the Sharks in June’s NHL Draft. The 19-year-old joins Nolan Foote, who was signed by Tampa Bay back on June 25th…Nolan Foote was named the 25th captain in franchise history (Tacoma+Kelowna) October 18th. Foote joins brother Cal, who captained the Rockets during the 2017-2018 season.