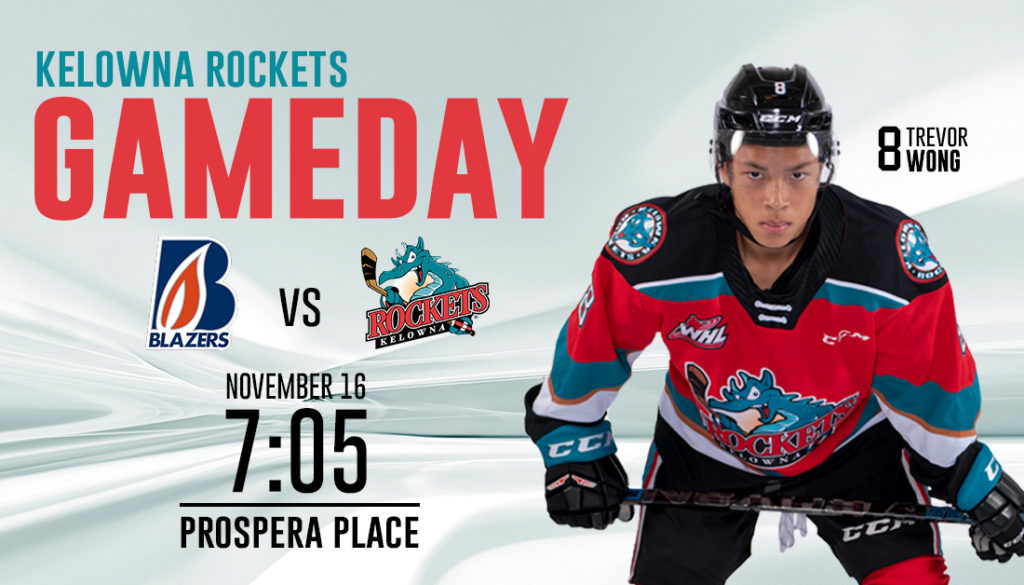 Wawanesa Insurance is encouraging Kelowna Rockets fans to get the warm and fuzzies by donating a new and unwrapped toy at an upcoming Wawanesa Toy Drive game tomorrow night. As a special thank you for your donation, Wawanesa and the CHL will enter all toy donors into a Grand Prize draw for a trip for two to Kelowna for this year’s Memorial Cup Presented by Kia.

Tonight’s Preview: The Kelowna Rockets will try to snap a season high four game losing streak tonight against the Kamloops Blazers. This is the fifth meeting of the season between the two teams with the Rockets sporting a record of 0-3-1-0 in the opening four games, having been out-scored 15-7 in the process. Over the last five seasons, the home team has dominated the seasonal series. The Rockets are 10-5-0-0 at Prospera Place yet are 6-9-2-1 at Sandman Centre. Nolan Foote leads the team in scoring in the seasonal series against the Blazers with three points. The Rockets are coming off a 5-2 loss in Kamloops Monday afternoon. The team hosts Victoria this Wednesday before heading out on the road for two games in Seattle and Tri City.

Player Move: The Rockets solidified the goaltending situation, sending 19-year-old James Porter to the Vernon Vipers of the BCHL. Porter was beat out for the backup job by 18-year-old Cole Schwebius. Porter played in 72 regular season games with the Rockets but was a healthy scratch for all 15 games this season.

Sign here please: Dillon Hamaliuk signed an entry level contract with the San Jose Sharks October 25th. Hamaliuk was chosen in the 2nd round by the Sharks in June’s NHL Draft. The 19-year-old joins Nolan Foote, who was signed by Tampa Bay back on June 25th.

Nolan Named Captain: Nolan Foote was named the 25th captain in franchise history (Tacoma+Kelowna) October 18th. Foote joins brother Cal, who captained the Rockets during the 2017-2018 season. Both are first round selections of the NHL’s Tampa Bay Lightning too. The Rockets selected Foote in the second round, 42nd overall in the 2015 WHL Bantam Draft. This is Foote’s fourth and likely final season in the WHL.

Broadcasters Notebook: Pavel Novak is serving game one of an 8 game suspension issued by the WHL for a checking from behind major and game misconduct penalty Monday in Kamloops. Novak won’t return until December 10th against Brandon.…Leif Mattson is three games shy of 200 for his career….Equipment Manager Chaydyn Johnson has returned from the World Under 17 Hockey Challenge in Medicine Hat/Swift Current. Johnson was behind the bench of Team Red which placed 5th…Nolan Foote, Dillon Hamaliuk and Kaedan Korczak played for Team WHL in the Canada-Russia Series. Foote had an assist on the tying goal Wednesday in Team WHL’s 2-1 overtime victory. Then in the rematch, Thursday, Nolan Foote scored twice in regulation time. He scored twice in the double shootout to determine the winner of the series…Pavel Novak remains a ‘C’ prospect for next June’s NHL Draft. Those new rankings were updated by NHL Central Scouting. A ‘C’ prospect is regarded as a player selected between the 5th and 7th round. The 2020 NHL Entry Draft will be held in Montreal.