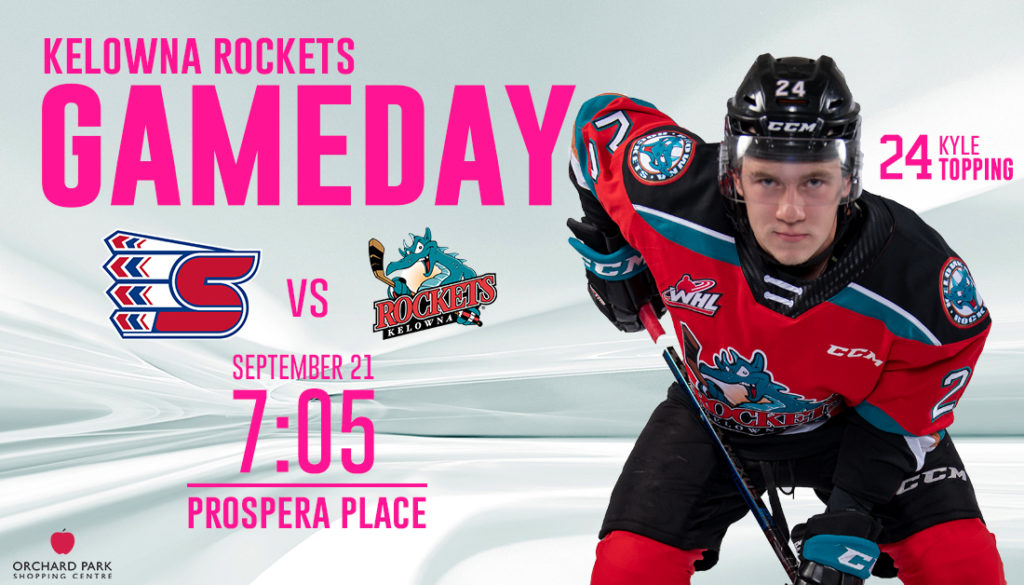 Game Day Preview: This is the first time in 8 seasons that the Rockets haven’t opened the regular season against division rival Kamloops. The last time the Rockets opened the season at home to the Spokane Chiefs was way back on September 20, 1996 in a 4-3 overtime loss. The Rockets were 1-2-1-0 against the Chiefs last season, with a 4-3 shootout victory, a 6-5 overtime loss and a 5-4 and 4-0 regulation time loss. After tonight, the Rockets are in Kamloops next Friday to face the Blazers.

Welcome back! The team essentially welcomes back 17 of the 22 players that wore a Rockets jersey last season. That includes 5 of the teams’ top 6 scorers in Kyle Topping, Leif Mattson, Nolan Foote, Liam Kindree and Kaedan Korczak. Adam Foote returns as head coach for his first full season behind the bench with Kris Mallette and Vernon Fiddler as his assistants. Fiddler was added to the staff on July 3rd.

Broadcasters Notebook: Nolan Foote was selected in the opening round (27th overall) of the NHL Draft in June by the Tampa Bay Lightning. Foote joins his older brother Cal, who was chosen 17th overall by the Lightning in 2017….Foote attended Hockey Canada’s Summer Development Camp, collecting 2+4=6 in four exhibition games….Kaedan Korczak was chosen in the second round of the NHL Draft by the Vegas Golden Knights….Newly acquired forward Dillon Hamaliuk was selected in the second round by the San Jose Sharks. Hamaliuk was acquired in a trade with Seattle back in May….Jake Lee received a free-agent tryout with the Sharks, attending the teams rookie camp….Leif Mattson and Kyle Topping attended the rookie camp of the Carolina Hurricanes…19 year-old d-man Sean Comrie received an invite to Philadelphia Flyers rookie camp which led to an invite to main camp…On May 2, 2019 the team acquired Dillon Hamaliuk, Jake Lee and goaltender Cole Schwebius from Seattle…The team will start the season with three-20 year-old’s after obtaining d-man Carson Sass from the Tri City Americans September 11th. The team will have two-16-year-old’s on its roster this season. Trevor Wong, the Rockets 1st round bantam pick from (18th overall) 2018 is joined by 16-year-old blueliner Elias Carmichael. The Rockets welcome Czech Republic forward Pavel Novak to the team this season. Novak was chosen 13th overall in the opening round of June’s CHL Import Draft. Back on October 3rd, the Rockets were awarded the host site for the 2020 Kia Memorial Cup, the Memorial Cup will be held at Prospera Place May 22nd to 31st and will represent the 102nd edition of the Canadian Hockey League national championship.

Did you know? Vernon Fiddler played 203 games with the Rockets between 1997 and 2000 before being traded to Medicine Hat in his 20 year-old season….Fiddler played close to 800 NHL games with Nashville, Phoenix, Dallas and New Jersey…..Prospera Place celebrated its 20th birthday on August 28th. It was August 28, 1999 that the facility opened its doors to its first official event, a rock concert with Canadian alternative band – Moist….The team had a record of 2-3-0-1 in six pre-season games.

Tail of the tape

The Rockets will host a tailgate party ahead of Saturday night’s home opener against the Spokane Chiefs.

From 4:00pm to 7:00pm fans are encouraged to attend the party beside the Rotary Centre for the Arts. Entry is $5.00 for adults, children are free with an adult. Season ticket holders will get in free when they show their opening night ticket at the gate.

There will be beer gardens, food trucks, live music and dancing as well as door prizes. The 2004 Memorial Cup Championship game will also be shown on a big-screen TV. Rocky Raccoon will be in attendance.

Fans who attend the tail gate party will be entered to win great prizes including a Nolan Foote signed jersey and five team signed sticks.

The home opener will also double as the Rockets Canadian Cancer Society Pink in the Rink game.

It’s the tenth season in a row that the Rockets have hosted the game, the event benefits the Canadian Cancer Society. The game-worn jerseys, which feature a special ten-year shoulder patch, will be up for auction with the money raised going to the CIBC Run for the Cure.

Pink glow wristbands will be handed out to fans in attendance, they’re also encouraged to wear pink to the game. Tickets are on sale at selectyourtickets.com, at the Prospera Place box office or by phone at 250-762-5050.