Rocket Recap: Hamaliuk beats the buzzer to lift the Rockets to victory 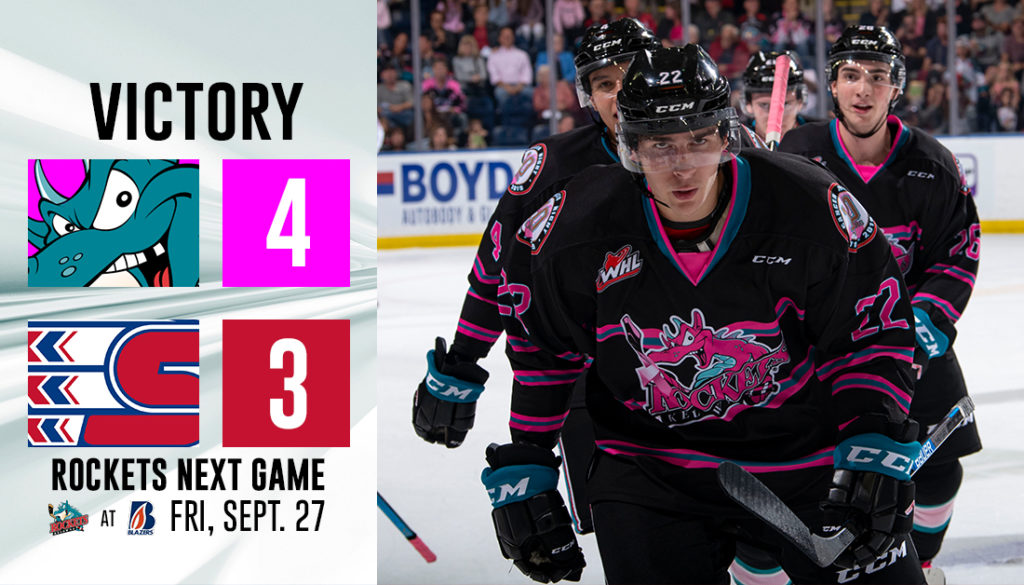 The Kelowna Rockets kept the party going all night long at Prospera Place on Saturday as they opened their 2019-2020 season with a buzzer-beater 4-3 victory over the Spokane Chiefs in overtime.

Fans gathered ahead of the game for the Memorial Cup Season Kick Off Tail Gate party, they were then treated to a thrilling Rockets game that saw Dillon Hamaliuk pick up four points including the winner in extra time.

Kyle Topping (1)  netted the Rockets first goal of the season while on the powerplay after Leif Mattson made an excellent passing play from Hamaliuk to feed it out front to Topping. Kelowna appeared to go up 2-0, but the goal was immediately waved off, and Hamaliuk was given a goaltender interference penalty. Despite the no goal the Rockets held a 1-0 lead after twenty minutes of play.

Spokane started the second while on the power play, but they carried the energy generated as the power play came to an end.  Jake McGrew (3) tied the game before the midway point of the period.  The Chiefs took the lead on a tally from Michael King (1).

The third period started with Hamaliuk and Jack Finley in the box serving roughing penalties that were assessed at the end of the second period, Topping was assessed a ten-minute misconduct. Dillon Hamaliuk (1) tied the game with his first goal as a Rocket and second point of the night during a Rockets power play. With Sass sitting in the box for slashing Spokane’s Filip Král (1) fired the puck into the net past a screen in front of Roman Basran to once again give the Chiefs the lead. Kaedan Korczak (1) forced extra time with a power-play slapper that was tipped into the net.

In overtime, it looked like the game would need a shootout to determine a winner until Hamaliuk (2) played the role of the hero as the horn went off. He put his rebound into the net as the siren went, the referees determined with a review that the goal was indeed scored with time still remaining.

The Rockets record is now 1-0-0-0. They’re off until Friday night when they’ll face the Kamloops Blazers on the road at the Sandman Centre.

Roman Basran stopped 25 of the 28 saves he faced from Spokane. The Rockets outshot the Chiefs 34-28.