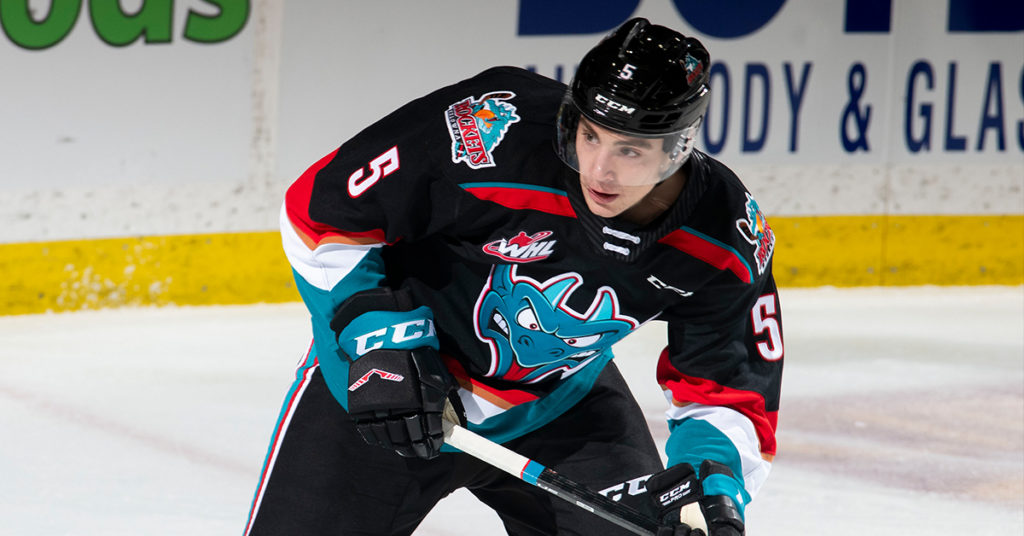 Babcock didn’t originally start off as a defenceman when he was younger, his dad is credited with his positional change.

“My dad got me into the game,” said Babcock. “It’s a funny story, I used to be a forward and I scored too many goals. My dad was the coach so he put me back on defence and that’s how I became a defenceman.”

Regarded as a two-way defenceman who isn’t afraid to jump up into the play, Babcock says he looks up to another former WHL defenceman.

“I model my game after Morgan Rilley, he’s a great two-way d-man who loves being in the offensive zone. I like his physicality in the defensive zone.”

Babcock, who was originally drafted by the Rockets in the fifth round (No. 110) of the 2019 WHL Bantam Draft, signed a Western Hockey League Standard Player Agreement and appeared in one pre-season game with Kelowna last year.

@nvmhaStorm Congrats to John Babcock for signing with @Kelowna_Rockets your Storm family is very proud. pic.twitter.com/tAxXw8bE8v

Following his first taste of the Rockets at last year’s rookie camp, he took the next step in his career with the Vancouver NW Hawk of the BC U18.

“I took back many things from my first camp, but mainly brought back pace of play with me. It’s obviously a lot faster in the WHL, so I tried to carry that back with me into major midget.”

He put up 21 points (8Gm 13A) and 38 penalty minutes over 38 games as a 15-year-old. He was awarded the team’s Alex Kerfoot Rookie of the Year Award for his efforts.

“A really cool experience I had was playing in the Winter Classic up in Fort St. James at the Ernie Sam Memorial Arena with my major midget team last year. We got on the bus, it took 14 hours to get there, and it was a beautiful rink. The rink was a little small, but it was great ice and such a cool experience.”

Babcock and his Vancouver Northwest Hawks shutout the Cariboo Cougars 2-0.

.@cariboocougars lose the 2020 #BCWinterClassic by a score of 2-0 to the @NorthWestHawks at Ernie Sam Arena 🥅 Goaltender Jayden Shull earns the shutout, stealing 2 points in the annual outdoor event | #CityOfPG #FortStJames @PGMatters pic.twitter.com/Mq3JN96Lhg

With the start of the Rockets season delayed, Babcock returned to the Hawks for a second season, where he was named co-captain.

“It was an honour to be given the C alongside Aaron Neil. He has so many great leadership skills, I felt like he and I both lead the group together pretty well. Although we didn’t get to play many games this season, it was still a great experience.”

Unable to play due to health regulations, the Hawks were only able to practice this season.

Once the WHL’s BC Division received approval, Babcock says it reignited him.

“I was pumped when I found out that I was going to be a part of the Rockets this season. I was almost lacking motivation near the end of the season with the Hawks because we weren’t able to play games, but as soon as I got the text message that the WHL was approved, I started to ramp thing up again.”

Prior to coming to Kelowna, head coach Kris Mallette paired up the rookies with vets for one-on-one facetime calls to help them get better acquainted.

“I was paired up with Jake Lee. It was pretty cool, I got to know a little bit about his life. It was a great experience, I asked him a lot of questions regarding his experiences in the league.”

He said that settling in has been easier thanks to his billets.

“My billets are great, they welcomed me in with open arms and I’m extremely grateful for that. Our little billet brother is fun, we play mini sticks with him. The food has been great and it’s made it really feel like home, they’ve taken really good care of us throughout quarantine.

“We’ve set up a little shooting pad in the backyard, so that’s gotten a lot of use.”

Babcock is also billeting with fellow rookie Turner McMillen. He says that it’s fun to have someone else around who is also going through some of the same experiences as a first-year player.

“Turner is such a great guy, and I can’t complain because he drives me everywhere. I’ve been able to get to know him a lot better during this time while we’ve been in quarantine.”

Babcock has appeared in both of the Rockets games so far this season, paired with Kaedan Korczak.

“My first games were pretty good I thought, considering the circumstances. It was definitely nice playing with Korczak, seeing what he’s done with the American Hockey League, which is something that I want to be able to do one day. Having him around and to lean on is nice.

“The home opener was a great experience, seeing the energy in the room—it’s something that I’ve really missed while we’ve been in quarantine and can’t wait to get back to it soon.”