Kaedan Korczak: Ready to take the next step for Rockets and Hockey Canada 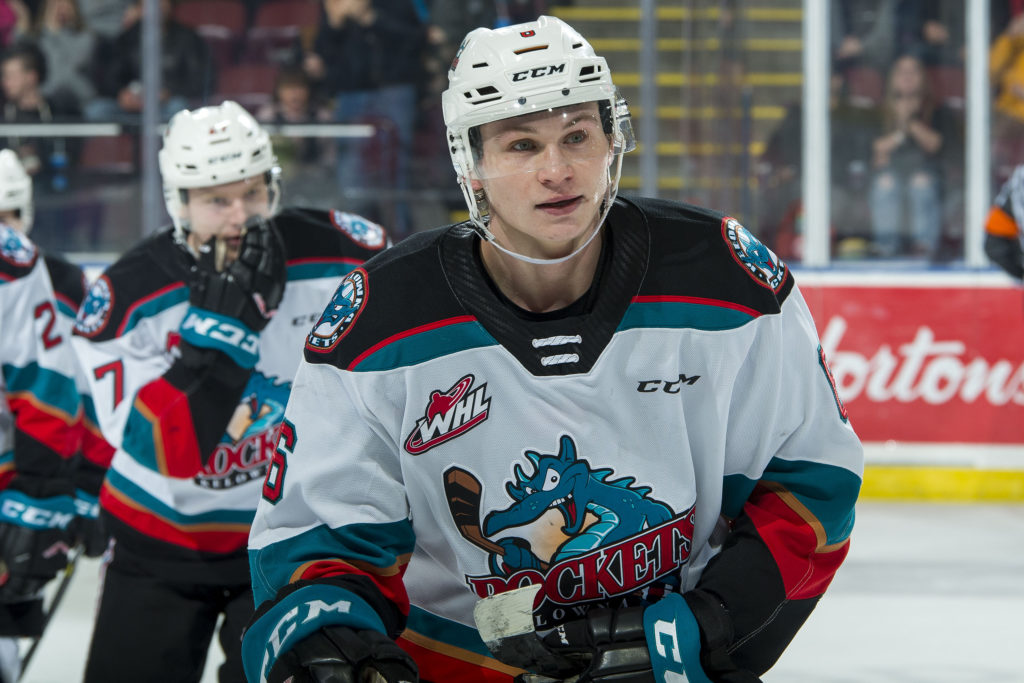 Kelowna Rockets defenceman Kaedan Korczak was expected to make a big stride in his development following his draft campaign last season, coming off of a career year, the Yorkton, Sask. product did just that.

The smooth-skating right shot took home the Rockets award for top defenceman for the second consecutive season. He appeared in 60 games this past season, eight less than last year, but was still able to set highs across the board with 11 goals and 38 assists.

Korczak, drafted last summer by the Vegas Golden Knights, credits being an NHL prospect with his growth over the season.

“I think a lot of it was confidence,” said Korczak. “I also think getting drafted was also a big part of it. Going to my first NHL camp was a great experience, I came back to Kelowna with a lot of confidence on the ice to be a big player for the team and in the league. It all kinda grew from there, I hope that this season I can keep growing and take another step in the right direction.”

With the departure of Lassi Thomson, a void was left on the Rockets blueline when it came to offence. Korczak stepped up to the plate, firing 180 shots on net, the seventh most among WHL defenceman.

Vegas kept in touch with him throughout the season, their player development team often had advice or just wanted to check in on their prospect.

Kelowna Rockets General Manager Bruce Hamilton said that Korczak was a steal in the second round. He expects the 6’4, 200-pound defenceman to be a cornerstone player next season.

“It was a great selection by Vegas because to me he’s a first-round player,” said Rockets general manager Bruce Hamilton. “I think he’s one of the top four or five defencemen in the league. He was a very stable part of our team this past year, he’s a guy that we’re certainly going to count on helping us get us off on the right foot for this upcoming year.”

Since the end of the season, Korczak has been training off-ice with his younger brother.

Ryder, a member of the Moose Jaw Warriors, had a breakout year. The forward was dealt to the Warriors from the Calgary Hitmen in the Jett Woo trade last summer. He posted 67 points (18G, 49A) this past season, a dramatic increase from 15 he put up the year before as a 16-year-old. Ryder isn’t draft-eligible until 2021 due to his late birthdate.

While the two had to get creative with a home gym, the elder Korczak says that having his sibling as a training partner has benefited him.

“When everything was pretty serious, my brother and I bought some equipment from a locally owned store, and we worked out at a family and friends shop while it was closed. It’s definitely nice to have Ryder around, it’s nice to have someone to push myself to be the best. Whenever he’s busy or I go alone it isn’t the same.”

The pair will be travelling two hours to hit the ice for the first time since the final game of the 2019-20 season. In the meantime, they’ve been rollerblading around Yorkton.

“I have some old skates that are now roller blades that I’ve been going pretty hard on. Rollerblading is as close as you can get to without having any ice, it takes a bit to get used to. Stopping takes a bit to get the hang of but other than that it’s mostly the same.”

“It’s an honour, the World Juniors are something that everyone aspires to play in when they’re a young player. Getting that call and opportunity is a huge honour. Having that chance to compete for my country at that tournament would be a special moment for sure.”

Hamilton says that he expects his blue-chip defenceman to be wearing the maple leaf when Christmas time rolls around.

“He’s another defenceman in a long line of players from our organization that have had the opportunity to be on the radar for Hockey Canada,” said Hamilton. I think he certainly deserves to be one of the players on that team.”

Tough way to end the season. Thank you Kelowna for the continued support. We’ll be back pic.twitter.com/8XF8pHbIwx