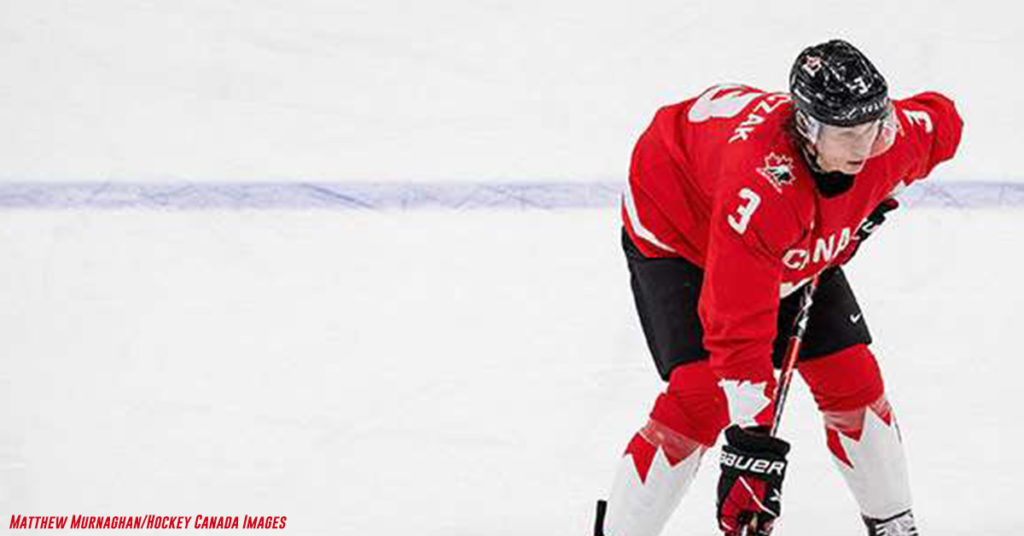 Taking a couple of days off before heading to Vegas, we caught up with Rockets defenceman Kaedan Korczak to chat about his World Junior experience and what’s next to come for him.

“It was great when I woke up this morning and got to go outside for some fresh air,” said Kaedan Korczak on a phone call from Airdrie, Alta. yesterday evening.

It was the first time in 24 days that he had been outside.

After departing for Edmonton from Red Deer on December 13, Team Canada was inside for the entirety of the tournament. Staying at the JW Marriott in Edmonton’s ICE District, the team had an indoor pedway to walk to the rink every game. Only teams’ staying at the Sutton Hotel would go outside to take a bus to the rink a few blocks away.

Korczak enjoyed his experience in the bubble, saying that the set up was great for a variety of reasons.

“It was an upgrade from our hotel in Red Deer. It was more flexible in Edmonton, there was a players lounge set up for us and we could order room service or food delivery to the hotel. Instead of going to guys rooms we could go there and play ping pong or watch other teams games.”

When asked about who the best ping pong player was, Korczak said that there were a couple of good guys, but that Jamie Drysdale was the best. He also said his favourite restaurant to order food from was Earls.

In a tournament unlike any other, Korczak wasn’t able to have friends and family there with him. He says that the support that he received for himself and his teammates was incredible.

“It was great to have the support of the fans in Kelowna, the fans back home in Saskatchewan and my family and friends. Every game we felt it for sure. On the big jumbotron, there were always those fan cams set up so it was really cool to see when our families were up there.”

Growing up in Yorkton, Sask., you spend your time in one of two places – on the farm or on the ice.

For defenceman @Korczak21, the rink was just the start of a journey that led to Team Canada.@oktire | @sask_hockey | #WorldJuniors pic.twitter.com/LZzR55B64G

He did see a familiar face on the other side of the ice at one point. Taking on Rockets teammate Pavel Novak and the Czech Republic in the quarterfinals.

“That was pretty cool to play against Novie, him and I best buddies. We spend a lot of time together in Kelowna, I pick him up every day and we drive to the rink together. That was a pretty special game for him and myself.”

Canada’s national teams feature the best players in the country, oftentimes players have to accept roles that are out of the ordinary for them to be a part of the team. For Korczak, who has been a top defenceman his entire career, he was primarily used as Canada’s extra dman in the tournament. He dressed for the final two games but did not get any ice time.

“It was tough for sure, just knowing I was in that position. It was the first time in my life that I had been in that spot, but it wasn’t something I could control. Like P.K. Subban at the 2014 Olympics, I cheered on my teammates and I was there to do my part. I was happy to be there with 25 great guys for 52 days, it’s an honour anytime you get the chance to represent your country in any capacity.”

Korczak says that the group was unlike any other Canadian team he has been a part of.

“The guys from college had to quarantine for two weeks when we got to Red Deer and we didn’t get to see them during that time. Then we went into our quarantine after the positive cases, so we didn’t see them for an entire month. I was really close with our goalie Devon Levi, Thomas Harley, Alex Newhook and Peyton Krebs.

“There were so many great guys, there were no cliques between the leagues. This group wasn’t like that at all and it was something that was really special to be a part of.”

Due to health regulations, Hockey Canada’s Vice President of Hockey Operations, Scott Salmond and co-captain Bowen Bryam placed the silver medals around the necks of Canadian players. Both Korczak and Byram are good friends, the pair play each other often in the WHL with Byram playing for the Vancouver Giants.

He said that while at the moment it wasn’t the greatest feeling, he really appreciated it that it was Byram placing the medal around his neck.

He said that while at the moment it wasn't the greatest feeling, he really appreciated it that it was Byram placing the medal around his neck. pic.twitter.com/smc9F81S2x

Krebs, who was taken by Vegas in the first round at the same draft as Korczak, will join him in Vegas. Korczak will fly down on Friday, then enter a seven-day quarantine before being able to hit the ice again down in Nevada.