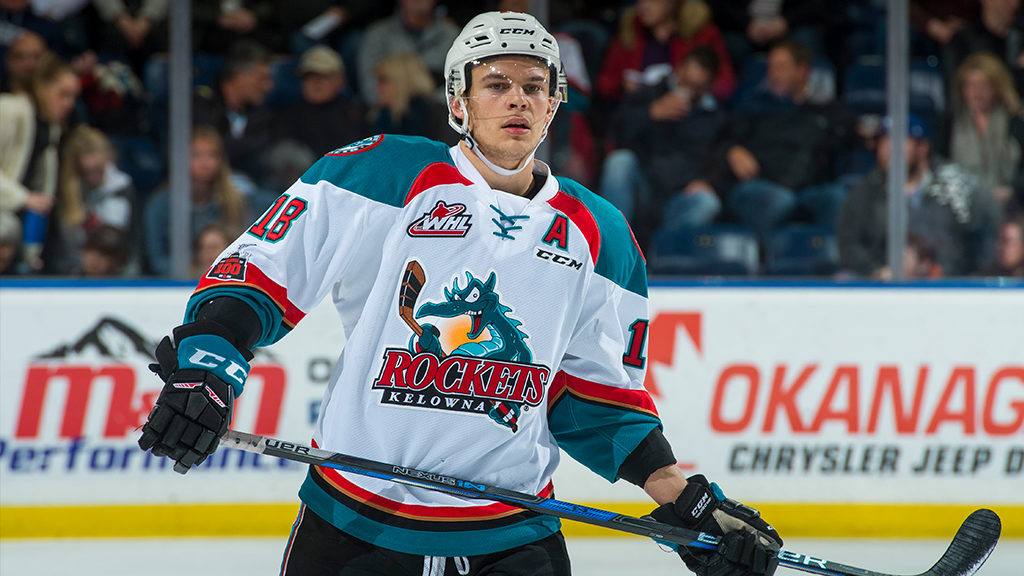 Former Rockets forward Carsen Twarynski recently took the time to answer questions about his memories from his time as a Rocket and update us on how his career as a pro is going.

Acquired in a trade from the Calgary Hitmen, Twarynski spent two seasons with the Rockets. He appeared in 96 regular-season games with the Ogopogo on his jersey, collecting 94 points (52G, 42A), 105 penalty minutes and a +23 plus-minus rating.

He was drafted in the third round at the 2016 NHL Draft by the Philadelphia Flyers. This season he has split time between the Flyers and their AHL team, making his NHL debut at the start of the season over in Europe.

KR: What was your reaction when you found out that you had been traded to the Rockets?

CT: I was very excited. I thoroughly enjoyed my time in Calgary, and I am blessed for all the memories and opportunities that I had with that organization, but a change was needed. I was extremely happy that Kelowna was the team I was traded to. I’m extremely thankful that Bruce and the Rockets family for bringing me in with open arms.

KR: What is your favourite memory as a Rocket?

CT: Junior hockey is obviously a great time in a young players life. But the run we went on the year I was traded there was amazing. The group we had in the locker room was one of a kind, and that 2017 playoff run was for sure one of the best memories I have from being a Rocket.

KR: Marissa Baecker, the Rockets photographer, jokes that while you were here she would set up the ‘Carsen Cam’ in certain places (the net cam, penalty box cam, ect.). Do you have a favourite photo that she took of you during your time here?

CT: The photo she took on the bench of me after scoring my first hat trick as a Rocket is my favourite. I remember telling her to be prepared for the third goal, the next shift I scored it, and she was more than prepared and was able to get a great photo.

KR: How do you think being a Rocket prepared you to make the jump to the pro ranks?

CT: One thing that played a big part was the players I had the honour of playing with. Every guy on the team both years I was there played a big part in my personal success, obviously playing with Dillon Dube and Kole Lind a lot my 20-year-old really helped spring me into a position to keep my career dreams alive. They’re two very special players and I’m thankful for that. Again, every guy on those two teams helped me and I have been able to build great friendships with all of them because of it.

KR: What’s it been like to face off against your former teammates like Cal Foote and Kole Lind in the American Hockey League?

CT: I always have fun playing against my former junior teammates and friends, there is always a lot of chirping and extra competition! It is exciting to be able to share moments of playing professional hockey against the guys that I grew up with, to see us all get closer and closer to achieving our goals is very special.

KR: You made your NHL debut this year in Prague, how crazy of a dash did your parents make to get there in time to see it?

CT: Hahah I don’t know the exact numbers but they were able to make a quick trip across seas which I was very thankful for. Fortunately, my brother was able to see my first goal in Vancouver, so they were both able to see very special different firsts in my career!

Over 4,820 miles later, @CTwarynski’s parents have arrived in Prague and surprised the rookie for his @NHL debut! #NHLGlobalSeries pic.twitter.com/AC3zQ4FfML

KR: Speaking of that first goal, you scored it while falling to the ice. Did you know that it went in right away?

CT: I did see it go in and out before I fell… it would have been nice to be able to celebrate it, but I will take them as they come. Haha makes it that much more special to me.

CT: I love playing in the city of Philadelphia. The facility, team, coaches, fans and the city itself is among the best of the best. I am thankful for the opportunity to play with the Flyers and I hope to continue that and be able to play my whole career in the orange and black!

KR: What is one piece of advice that you have for young hockey players?

CT: It is hard. It is not easy to be successful, it’s easy to have fun. But when you are trying to make a career of it and your goal is to play in the NHL, it takes a ton of sacrifice and hard work. But once you get there, it definitely is worth it. The feeling of making it is unbelievable. So work hard, enjoy the ride, and don’t let anyone get in the way.