Kelowna victorious over Americans in overtime 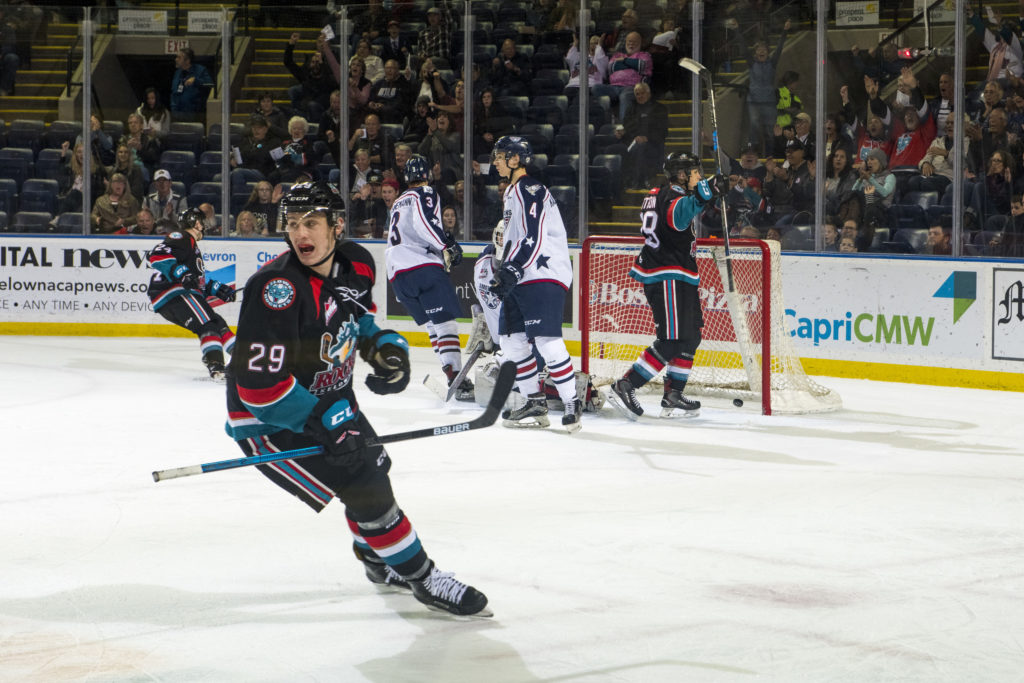 The Kelowna Rockets launched back into the win column with an overtime win over the Tri-City Americans Friday night in Kennewick, Washington.

The Rockets penalty kill went to work early in the game. Kelowna’s Ted Brennan was assessed a major and a game misconduct for checking from behind just 5:53 into the first. The Rockets were able to kill off the lengthy penalty. Kyle Olson(5) broke the scoreless tie 16:00 into the opening frame, giving the Americans a 1-0 lead. After twenty minutes of play, the Rockets trailed the Americans by one goal.

Kelowna’s Leif Mattson(10) tied the game 5:58 into the second. He picked up the puck off of the faceoff dot firing a shot on the Americans starter, Beck Warm. Warm left a big rebound that Mattson put past him. Nolan Foote assisted on the goal; it was his 100th Western Hockey League point. Just under ten minutes later Kyle Crosbie(4) gave the Rockets their first lead of the night when Dallon Wilton’s wraparound chance sailed right to him. Kelowna headed to the dressing room after two periods of play with a 2-1 lead.

The two teams went back and forth throughout the third period. The Americans pulled their goaltender in the final minute of the game, Krystof Hrabik(8) tied the game with 10.3 seconds remaining in the period.

Mattson(11) lifted the Rockets to victory just 20 seconds into overtime scoring his second of the night on a big rebound that floated right onto his stick.

Kelowna returns home to face the Saskatoon Blades on tomorrow night at Prospera Place for the annual Teddy Bear Toss game. Tickets are on sale at selectyourtickets.com, at the Prospera Place box office or by phone at 250-762-5050.

The Downtown Kelowna Winter Street Market & Tree Lighting is also tomorrow. From 6am-9pm the block of Water Street between Queensway and Doyle will be closed. There is a detour through the two roundabouts.