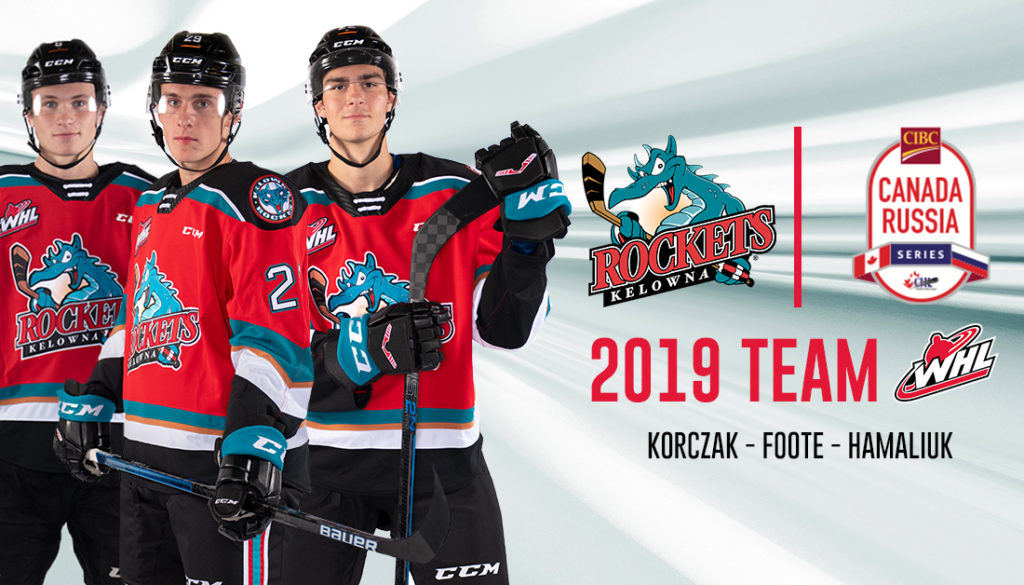 The Western Hockey League, in collaboration with the Canadian Hockey League and Hockey Canada, announced today the roster for Team WHL, which will compete against Team Russia at the 2019 CIBC Canada Russia Series on November 13 and 14 in Saskatoon and Prince Albert, Sask.

The Kelowna Rockets will be represented by a trio of players, a league-high. Nolan Foote, Kaedan Korczak and Dillon Hamaliuk have been named to the Team WHL roster, who will face Team Russia in Game 5 of the 2019 CIBC Canada Russia Series in Saskatoon on Wednesday, November 13, before continuing on to Prince Albert for Game 6 to conclude the series on Thursday, November 14.

“It’s great that Hamaliuk and Korczak are getting an opportunity alongside Foote, who’s already in the mix for the World Junior team,” said Rockets president and general manager Bruce Hamilton. “I think that it’s a great for those two guys, that they’ve been recognized this early in the year. It’s a chance for them to open some eyes and possibly create an opportunity for them.”

Foote, who was selected by the Tampa Bay Lightning with the No. 27 pick in the 2019 NHL Draft, competed for Team WHL last year at the 2018 CIBC Canada Russia Series. In eight games this season Foote has 10 points (four goals, six assists).

He lit up the World Junior Summer Showcase with Canada in late July/early August, leading all Canadian players in points with six (two goals, four assists) in three games.

The Vegas Golden Knights drafted Korczak 41st overall during the second round of 2019 NHL Entry Draft. This season the defender has two goals and three assists in nine games played.

Sir @Korczak21 sneakin’ on up! pic.twitter.com/UUwZgDQoyx

The 2019 CIBC Canada Russia Series will represent the event’s return to both Saskatoon and Prince Albert. In 2005 and 2014, the event made an appearance in Saskatoon, while Prince Albert played host in 2008.

The 2019 CIBC Canada Russia Series is supported by title sponsor CIBC, the Official Bank of the CHL, along with associate sponsors Kia Canada, Cooper Tires, and Kubota Canada. All games will be broadcast nationally on Sportsnet and TVA Sports.

You can see Foote, Korczak and Hamaliuk battle the Swift Current Broncos tonight. Purchase the Hat-Trick Wednesday deal from Select Your Tickets before 2:00 pm on gameday, you’ll get a pop, a hotdog and your ticket for $19.99 plus fees. Tickets are on sale at selectyourtickets.com, at the Prospera Place box office or by phone at 250-762-505