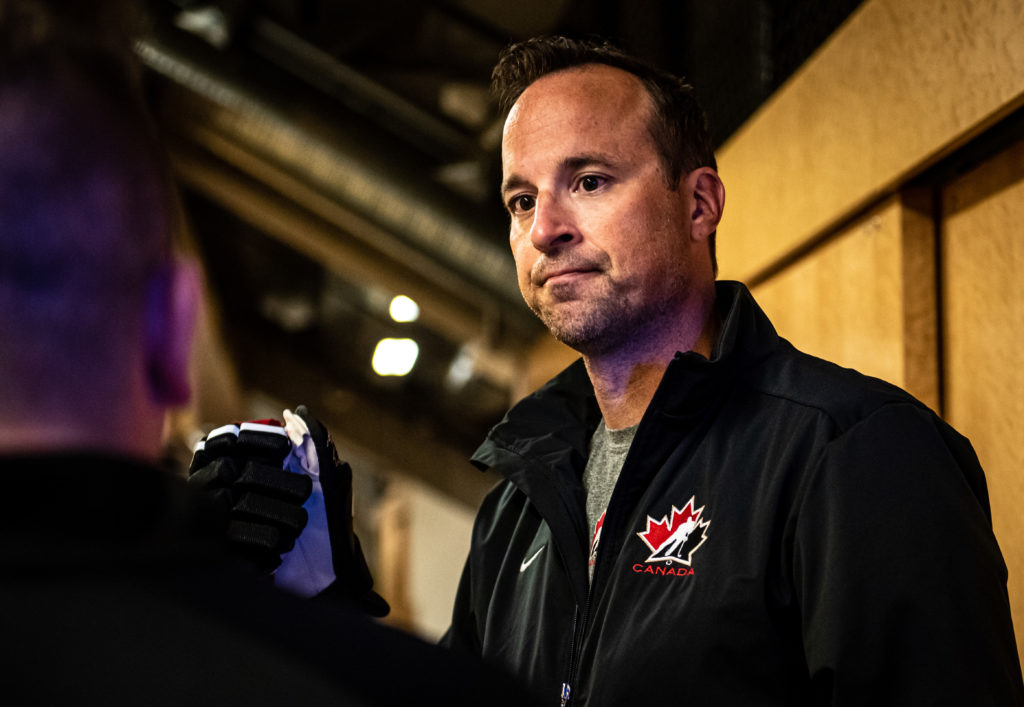 Long-tenured coach Kris Mallette is no stranger to working his way up through the ranks, the former defenceman took the reigns as the Rockets head coach in February 2020 after serving as an assistant for the organization for parts of seven seasons. Prior to that, he was on the bench for a season as an assistant coach in the BCHL with the Vernon Vipers and spent three seasons with the North Okanagan Knights of the KIJHL.

Over the last few years, Mallette has had the opportunity to start working his way up through the coaching ranks within Hockey Canada’s men’s national program.

Mallette’s first crack at the national program in a coaching capacity came when he was asked to help as a guest coach for the men’s U-18 team back during the 2016-17 season. In the summer of 2020 he served as an assistant coach for the virtual national under-17 development camp, he was set to be an assistant coach for Team Red at the 2020 World Under-17 Hockey Challenge that was ultimately cancelled due to Covid-19.

This past November he led Team Canada Red to a second-place finish as the head coach at the Capital City Challenge, a four-team tournament featuring three men’s under-17 teams and Canada’s National Women’s Team. This summer Mallette was once again asked to represent his country, serving as an assistant coach for Hockey Canada’s U-18 team at the Hlinka Gretzky Cup, coming away with a gold medal.

For Mallette, he says that after the 2020 experience where they were unable to play the tournament, you never take for granted the opportunity to represent your county.

“We’re just very fortunate to have had the opportunity this year to actually compete internationally,” said Mallette. “We were preparing to have that chance in 2020, but then obviously covid pops in. I’m fortunate to have been a part of the national program a handful of times, whenever you’re able to represent your country it’s an honour and to be able to win is just that much better.”

This time around, gearing up for the Hlinka Gretzky Cup meant a camp based in Calgary to determine the roster and then competing in the seven-day tournament in Red Deer. In all, Mallette was away from his family for three weeks.

Summer time for anyone working in hockey comes at a premium, especially for someone with a family. He credits his wife and two daughters for allowing him to continue chasing his coaching dreams during the offseason.

“It’s a huge commitment for everybody, I have a very understanding family on my part. It was a good chunk out of our summertime, my rocks back home allow me to pursue my dreams. For as long as it was, it seemed like it flew by—especially after you win you’re back on a plane headed home the next day.”

The 2005-born group of players that competed at the Hlinka Gretzky Cup have been touted as a deep and talented pool of players. Mallette spoke on how special that group is and how hard it was to cut some of the most talented kids in the county.

“Our process started with four skates, they had two practices and two intrasquad games. After that, we had to go from 44 players down to 22. This 2005 age group is loaded with talent, as the process wore on, you slowly try to put a ghost roster together and you know there are certain players you’re trying to fit into certain positions. We wanted to get a feel for both teams, so we would practice with both teams and were at the rink for essentially eight hours a day trying to get an idea of what each and every player brought. In the end, those choices were made by management and our head coach with deliberations from guest coaches. It was tough, I’m glad that at the end of the day the final say came from up top and we just put together the best team that we could.

“There are a lot of really good players that we had to cut off this team, guys like Lukas Dragicevic from Tri-City, Tyler Peddle out of the QMJHL that went second overall in their draft and Bradly Nadeau out of Pentiction. But it bodes well for Canada in the future because if these players use it as motivation the U20 World Junior team in a few years could be really, really good. You’re always going to see those players get those chances later on that maybe hadn’t been part of the program earlier on like for the U17  and U18 teams.”

Two players that made the final team are familiar to Rockets fans, winger Andrew Cristall and defenceman Caden Price. Over five games Price chipped in four points (1G, 4A) from the blue line, while offensive juggernaut Cristall posted six points (1G, 5A) in the same amount of games.

Mallette had high praise for the Rockets top two picks in the WHL’s 2020 Prospects Draft.

“Andrew and Caden were very good from start to finish at the Hlinka, we’re very fortunate to have them as a part of the Rockets team. To have them do as well as they did within their age group and represent their country was awesome for them.

“I think Cristall in the tryout versus the U20 World Junior team had four goals, he was scoring goals and doing his thing. Caden started a little slower, not the best practices, but luckily because he was a part of the Capital City Challenge last year Hockey Canada was aware that he was a gamer, by the end of the tournament I can honestly say he was one of our, if not our best defenceman all around. He’s put himself on the map with a lot of NHL scouts that were in attendance.”

The pair will be eligible for the NHL Draft for the first time this season, Mallette says that the two will be heavily leaned on this upcoming season.

“Expectations for both Price and Cristall are to play very big minutes this season for us and continue their development. I can’t wait to watch their maturation throughout the season.”

Coming into their 16-year-old season last year, fans were already well familiar with Cristall after he played for the Rockets as a 15-year-old during 2021 Hub season on an exception that signed first-round picks from the previous year’s draft could join their team.

With a feel for how the league worked, Cristall exploded onto the scene as a rookie during the 2021-22 season, posting 69 points (28G, 41A) over 61 games—good enough for third in team scoring. By the end of the campaign, the winger was playing top-six minutes alongside Colton Dach and Mark Liwiski.

Heading into this season, Mallette says that Cristall has put in the work over the summer and fans should be excited to see the development that has taken place.

“He thinks the game a different way, I think that his skating has improved and he’s put on some weight, like 25 to 30 pounds. He has to continue to work on the 200-foot game, he’s gotten much better at it since the hub season and through last season. I mean, he had 69 points as a 16-year-old last season, is he going to get opportunities this season? Absolutely. Cristall will be a very special player in this league for years to come if he continues to do what he does.

“Colton Dach also had an unbelievable World Junior summer series camp, I was very, very impressed with how well he showed, so the expectation for him is high, much like a lot of guys on our roster—they’re all going to have to take some serious steps this season.”

Meanwhile when talking about Price, Mallette admitted that the Saskatoon, Sask. product flew under the radar last season as he became more and more comfortable with the level of WHL play. With the departures of overage defencemen Jake Lee and Tyson Feist, the core group from last year will be tasked with taking another step forward this season.

“On our back end this season we’ve got three 19-year-olds in Jackson DeSouza, Noah Dorey and then Elias Carmichael who has been here for quite some time, 18-year-old John Babcock and then we’ve got Caden. They all have attributes in different ways, but for Caden with how he finished last year and if he continues to do what he’s done up until this point, his ice time will be dictated from that.

“I think he’s a complete player, I think he can chip in offensively, he defends extremely well and doesn’t get a lot of credit for it. For him it’s still remembering what it is that makes him successful and that’s defending first and foremost, utilizing his skating ability and strength to break pucks out early and join the play as a second-tier kind of guy. He made some great offensive plays at the Hlinka Gretzky Cup that just showcased him as a player and he’s just going to continue to get better and better.”

With so much talk about development, we asked Mallette how joining the coaching staff for Hockey Canada events helps develop him into a better coach.

“Every time that I’m a part of Hockey Canada, representing your country is a huge honour. You often forget that you’re surrounding yourself with some of the best players within the country, there you’ve got to be at the top of your game in making sure how clear you are with your delivery in meetings and concise you are in your thought process. But then you’re also surrounding yourself with coaches that may have different opinions and systems, they may have a different style of doing things, which I find extremely refreshing because I’m always trying to learn.

“I think the biggest thing for me is the takeaways within maybe the systematic approach for some of these coaches, what I’d like to implement within our group and just being more and more confident within our environment to know that what I’m saying is good. Maybe I picked this up from here or there and tried to implement it within our group and see where it goes. It’s just always learning from different people, whether it’s players, management and or coaches.”

Mallette and the Rockets are set to open the WHL regular season against the Portland Winterhawks on Saturday, September 24 at Prospera Place. Season tickets are now available to the general public for the upcoming 2021-22 Rockets season. Click here for details and pricing.