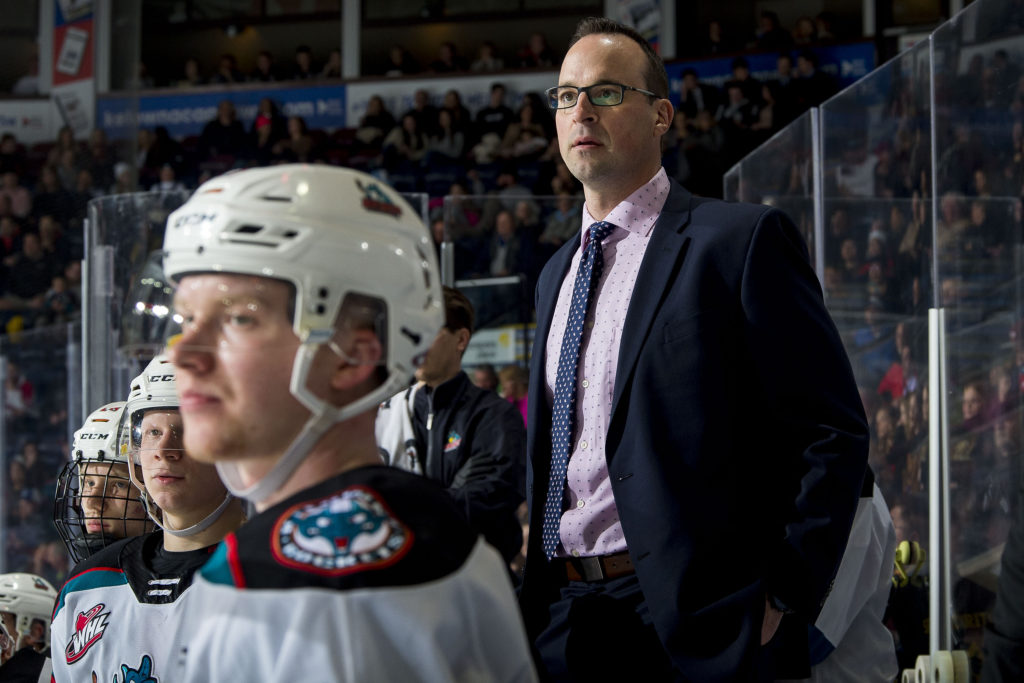 Kris Mallette’s hockey career was going to come to an end at the conclusion of the 2008-09 season, the then 30-year-old defenceman was playing in his ninth professional season and had decided it was time to hang up the skates. Suiting up for the IHL’s Flint Generals, he suffered an injury that ultimately ended his pro career a bit earlier than he had anticipated.

“I was hit pretty hard, my neck was injured and I had a concussion,” said Mallette. “I had already decided that I was going to retire at the end of the season, my oldest daughter was starting school and we didn’t want to move her around.”

He knew that he wanted to stick around the game and coaching was what he wanted to do. The former Rockets defenceman paid a visit to general manager Bruce Hamilton for advice on what to do next.

“Growing up, I never really had aspirations to go to school. I didn’t have the patience. It’s funny now because it seems that all I’ve got is patience, in this job you have to. Towards the end of my career and studying the game, I knew this was the route I wanted to go.

“The first thing I did after retiring was come and in and see Bruce. He set me up with Kelowna Minor Hockey, that’s where I got my start. I was there for a year with Brent Gilchrist and Mack O’Rourke, guys who I still keep in contact with.”

After a single season with the KMHA, Mallette moved up to Junior B as an assistant coach with the KIJHL’s North Okanagan Knights. Two seasons later he was promoted to head coach of North Okanagan for the 2012-13 campaign.

During that season, Mallette led the Knights to their first division title and reached the league championship, losing in six games to Castlegar.

The next season moved up again, this time to the BCHL’s Vernon Vipers as an assistant for a single campaign. He once again made it to the championship series, falling to the Coquitlam Express.

For the third summer in a row, Mallette made another jump. This time he joined the Rockets, his former junior team, as an assistant coach. He was tasked with running the defence and penalty kill units.

On February 19, 2020, he moved up again, staying within the Rockets organization he took over as interim head coach.

This past Monday it was announced that term interim had been dropped from Mallette’s title.

With Kelowna, Mallette has worked under four different head coaches; Dan Lambert, Brad Ralph, Jason Smith and Adam Foote. Mallette says that he’s taken away something from each coach.

“Dan Lambert was phenomenal at building relationships, look at what we did in 2014-2015 when we had a lot of success. He was phenomenal at the communication side of things. Just making these guys feel great, their willingness to go through a wall for him. Fast forward to Brad Ralph, the detail that he had in his game preparation was second to none. Jason Smith was another coach that I learned how to handle these types of players. He had come out of the NHL and showed me different avenues of how to approach different days. Last but not least, Adam, he taught me it was okay to be intense. His knowledge of the game from his career was second to none. I’ll be able to hopefully take what those coaches have shown and taught me and be able to teach that to our players.”

It isn’t just Rockets coaches that Mallette has learned from. During the 2004-05 season, he played for the Central Hockey League’s Colorado Eagles, winning the championship and growing as a player thanks to his coach.

“I go back to a year that I was fortunate to win in Colorado. I was a rough and tumble defenceman; pass first, fight and be physical. Chris Stewart instilled so much confidence in me to be able to play. He would ask me, ‘Why aren’t you making that pass? Why aren’t you skating the puck?’ That has always stuck with me, the way he made me feel and not to pigeonhole myself as a one-dimensional player. He had gotten me to challenge myself to be outside of the box.”

Mallette is often asked about having to wait to get his shot to become a head coach in the Western Hockey League, he says that he knew that his time would come he just had to wait for it.

“It’s easier said than done just sitting there watching, but I knew it was going to come at some point whether it was Kelowna or somewhere else. Every year, I’ve taken something from the head coach, I was always trying to learn whether it was positive or negative. That’s the biggest thing I think a coach needs to be able to do, be willing to learn and open to different ideas. It’s finally my time to utilize everything I’ve taken in over the years and put my stamp on the team.”

For Mallette, being a coach isn’t just about hockey. He understands that life goes on outside of the rink and that he can play a part in helping players grow on and off the ice.

“The best part about coaching is the progression of the young men over the years, whether they progress in their hockey career or life. It’s pretty rewarding to be a small part of molding them into who they become.

“If I can get my players to believe in them, which I do, as a person first and hockey second I think great things can happen.”