THE WESTERN HOCKEY LEAGUE HAS ANNOUNCED ITS RETURN TO PLAY PROTOCOL FOR THE 2020-21 SEASON, CLICK HERE TO LEARN MORE
THE ROCKETS ONLINE STORE AND STORE IN PROSPERA PLACE ARE TEMPORARILY CLOSED
January 27, 2020 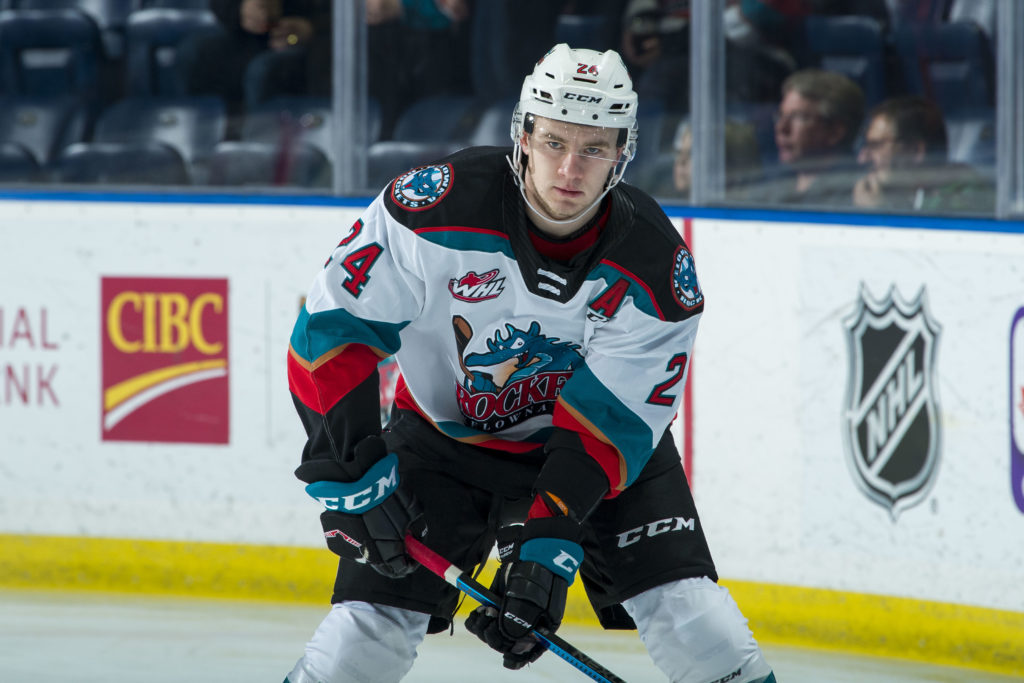 “I don’t like to watch it,” were Kelowna Rockets assistant captain Kyle Topping’s words when asked if he’s seen the video of himself crashing into the boards and breaking his tibia/fibula back on October 30th against the Victoria Royals.

Because it was an away game, not very many Rockets fans saw what happened. The play wasn’t blown dead, and Topping found his own way to the bench, meaning that the Rockets radio broadcast didn’t initially catch onto how severe the injury was.

Since he doesn’t like to watch the video, we decided not to share it and instead asked Topping to describe what happened 2:23 into the second period as he chased down a puck that Nolan Foote had chipped up the right wall and into the corner.

“I was in on the forecheck,” said Topping. “I was pretty close to the boards, and I don’t know if I lost an edge or just hit a divot in the fresh ice, but I ended up sliding feet first. My left ankle hit the boards first, right away I knew something was wrong with my left leg.

“I knew that I had to get off as soon as it happened, I tried to get up and I fell. Our bench was the closest one to me, so I didn’t really want to have the play blown down. I could still push with my one leg, so I just crawled and the ref gave me a little boost. He asked if I wanted him to blow it down, but I was already pretty close, so I said no.”

The Salt Spring Island, BC product is thankful that the injury happened at home because it allowed his parents who were sitting in the stands to be there for him

“I went into the room, and I was pretty angry when I got in there at first, I threw my stuff off because I knew something was wrong. My dad came in right after it happened and talked to Scotty and the doctors, then my parents took me to the hospital. If I was going to get hurt, it was nice that it was in my hometown.”

Two days later, Topping underwent surgery in Kelowna to repair his ankle. It was the first major injury, he had experienced a few minor ones throughout his career but nothing like this.

“Surgery was definitely necessary. The doctors and the surgeon did an awesome job, it went really well. It was a 45-minute procedure that was pretty basic, screws and a plate. After the surgery, it was a little painful for the first couple of weeks. But once the swelling went down, it started to loosen up and feel better.”

Hamilton also announced that Kyle Topping is scheduled to undergo surgery later this morning to repair a broken ankle.

“Kyle’s health is our biggest priority right now,” said Hamilton. “We don’t have a timeline for his return yet, our concern is his well being and his health.” pic.twitter.com/cl7llsfqPu

A Western Hockey League team can only carry three 20-year-olds on their roster, Topping was occupying one of those sports as a player born in 1999. To try to fill the role, the Rockets brought in another overage player to fill the gap down the middle.

When his injury was added to the WHL Report on November 5th, he was initially given a timeline of 12 to 18 weeks to heal. That timeframe was somewhere between January 28th and March 10th, past the January 10th WHL trade deadline.

He knew though that if he put in the time and effort, he could be back and be an impact player once for the Rockets. He didn’t pay much attention to what moves were going on with the Rockets roster and instead focused on himself and getting back to being where he was.

“My coaches, teammates and management supported me the entire way through my recovery so I kind of just knew if I was going to come back and be ready, I had to put the work in. I just had to worry about myself and let things fall into place.”

When the rehab process began, it wasn’t comfortable at the start.

“It was frustrating at first because my leg stiffened up. I wasn’t even in a cast, but it was still stiff and tight. All of my muscles were weak, so we were rehabbing those and getting those back to normal.”

“Kyle’s commitment to the game, his work ethic and what he wanted to do and come back and be a leader was a big help to him in the recovery process,” said Hoyer. “We did a lot of stretching to get the dorsiflexion back in the ankle. We spent lots of time on a wobble board and did a lot of balance work on physioballs. He did a lot of extra work on his own time, that helped speed things up.

“It wasn’t just stretching and balance though. Depending on the conditioning of the athlete and getting them back to practice that’s part of it too, getting the legs and lungs behind the injury.”

Topping didn’t travel with the team during his time on the injured reserve. Instead he came to the rink and put the time in at the gym everyday.

Around mid-December he was cleared to return to the ice again and give the new hardware in his ankle a go.

“I was pretty tentative, I didn’t want to do anything to make it feel worse,” said Topping. “I took my time coming back and made sure that I wasn’t going to hurt it even more. Once I started feeling more comfortable, I started picking up the pace.”

Topping and Hoyer worked on finding a lacing pattern for his skate that made things more comfortable. The two mixed and matched different eyelets to get more flexion, trying out three different ways before landing on a style that worked.

He returned to practice with his teammates following the Christmas break, just ahead of the trade deadline. Topping continued to have the same mentality that he did early on when it came to a roster spot, keep your head down and keep working.

“I think I looked at it as it was out of my control. I just needed to focus on getting back as soon as possible and getting healthy.”

Hoyer says that when a player returns from an injury that has kept them away from their teammates, you often see a spike in their progress.

“I think mentally getting back on the ice was a big part of the recovery. You get back into your equipment and get back to being with the guys. There’s always an increase in efficiency in skating when you’re skating with other good skaters and trying to keep up with them.”

The day before the trade deadline, the Rockets moved out a player to clear an overage spot for Topping on January 9th.

“We’re very excited and surprised more than anything that Kyle Topping is going to be back two or three weeks earlier than we ever thought he would be,” said Rockets president and general manager Bruce Hamilton in the trade announcement.

Ninety-two days after suffering his injury, Topping made his return to Kelowna’s lineup this past Friday he against the Seattle Thunderbirds. The plan was to ease him back into action, playing a very limited role with small minutes. However that plan changed, Topping had three shots on net alone in the opening minutes of the game and didn’t slow down.

“It felt pretty good, I tried to get into it as early as I could,” said Topping. “Once I started getting my feet moving and more shifts in things started coming back naturally.

“It was a little bit different than the game like simulations we ran in practice, it was a little bit faster. The coaches did a good job of putting me in those situations, practice a lot of game-type situations. I felt ready and I knew once I got my first couple of shifts in I would be fine and could trust myself to just play.”

Rockets head coach Adam Foote had some high praise for his centreman following his first game back.

“I honestly thought he would not be at where he was,” said Foote. “He just went. He looked like he had a lot of confidence, and he looked like he was in pretty good shape, he looked like he got stronger. We knew he was working out pretty hard and was driven, and it’s nice to see it has paid off for him.”

Topping played in all three games for the Rockets this past weekend. He didn’t look like a player that’s missed nearly three months of action and 30 games, he was a threat on the ice every time. The two way forward picked up the primary assist on the game-tying goal to force overtime Saturday night against Vancouver.

Give Topping time and space, he’ll make ya pay.

Topping and the Rockets will be back in action on Friday when they host former Rocket Leif Mattson and the Spokane Chiefs for the first game of a home-and-home series. Tickets are on sale at selectyourtickets.com, at the Prospera Place box office or by phone at 250-762-5050.