THE WESTERN HOCKEY LEAGUE HAS ANNOUNCED ITS RETURN TO PLAY PROTOCOL FOR THE 2020-21 SEASON, CLICK HERE TO LEARN MORE
THE ROCKETS ONLINE STORE AND STORE IN PROSPERA PLACE ARE TEMPORARILY CLOSED
July 15, 2019 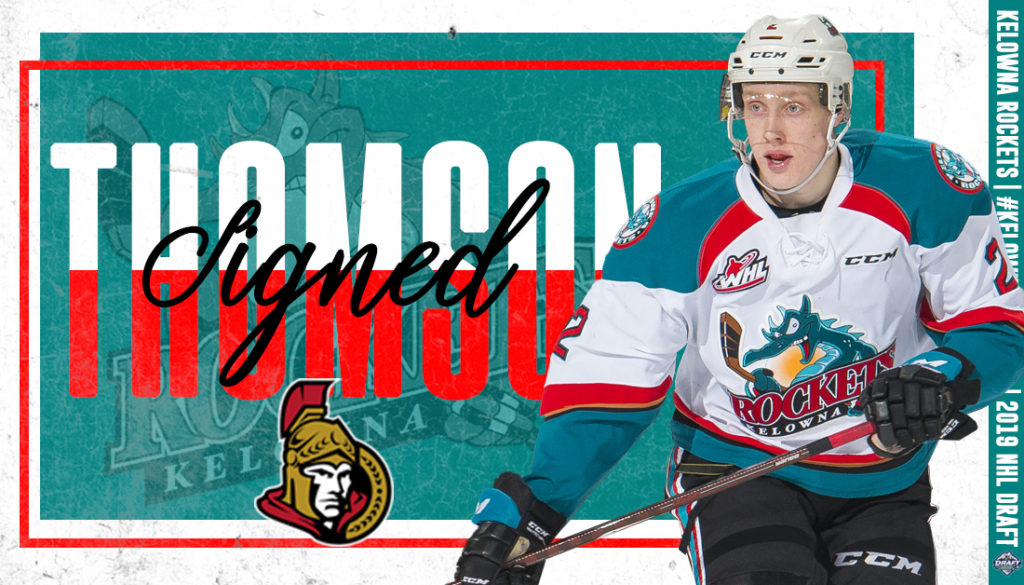 The Ottawa Senators have signed defenceman Lassi Thomson to a three-year entry-level contract, the Senators announced today. The Senators drafted Thomson with the 19th overall pick at the 2019 NHL Draft in Vancouver, British Columbia last month.

“Lassi has great offensive instincts and an NHL-calibre shot,” said general manager Pierre Dorion in a press release. “He also brings a high compete level – he’s always moving his feet and driving the pace of play. We came away from development camp in Ottawa very impressed and feel that he is going to be an important piece of our team’s future.”

Thomson suited up for 63 games with the Rockets this past season, posting 17 goals and 24 assists for 41 points as a rookie in the Western Hockey League. He was named the Rockets rookie of the year and earned the Western Conference Rookie of the Year nomination for the Jim Piggott Memorial Trophy from the WHL.

Thomson will compete with Finland later this month at the 2019 World Junior Summer Showcase in Plymouth, Michigan. The event, held at USA Hockey Arena from July 26-Aug. 3, features the United States, Canada, Sweden and Finland starting the process of choosing their rosters for the 2020 IIHF World Junior Championship, which will be held Dec. 26-Jan. 5 in the Czech Republic.