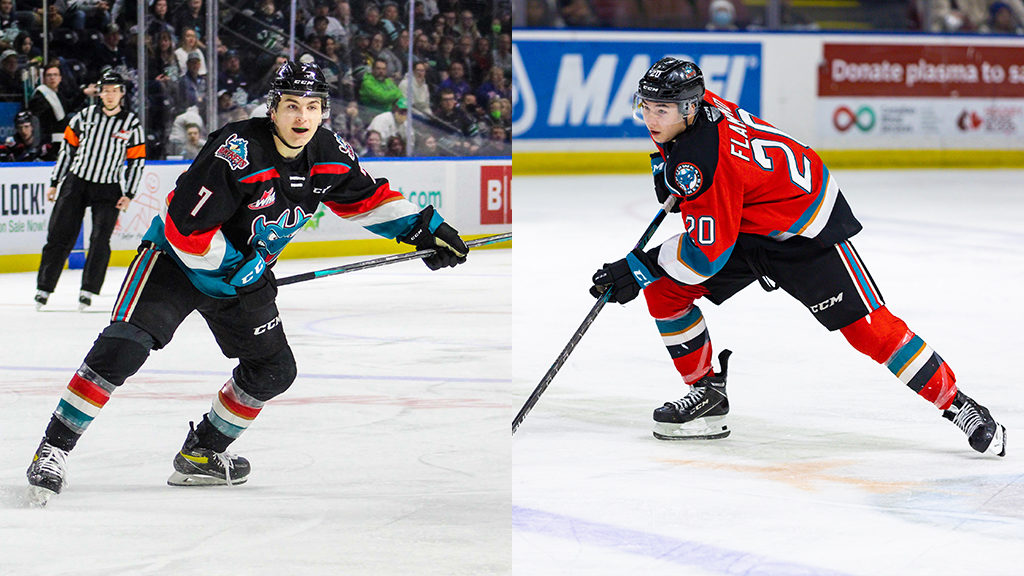 Kelowna Rockets centremen Max Graham and Nolan Flamand rank No. 156 and No. 218 among North American, respectively, as the NHL Central Scouting Bureau today released its final rankings for the 2022 Upper Deck NHL Draft.

Graham improved from the No. 168 spot he held in the mid-season rankings. The 6’3, 180-pound Kelowna product posted 33 points (10G, 23A), 43 penalty minutes and a +10 plus/minus rating through 64 regular-season games this year. He added a goal and an assist in five playoff games.

Flamand—who was ranked 187 on the midterm report—missed nearly a month of action, sitting out of eight games due to a lower-body injury between January 5th and February 2nd.

The Saskatoon, Sask. product appeared in 60 games for the Rockets this season, posting 40 points (10G, 30A), 8 penalty minutes and a +19 plus/minus rating.

Flamand was awarded the Rockets Hollis Pearce Award for Top Defensive Forward. He led all Rockets centremen with a winning faceoff percentage of 51.9%.

In its 47th year of operation, NHL Central Scouting provides evaluation and scouting of draft-eligible players to NHL member clubs. Headed by Director of Central Scouting Dan Marr, NHL Central Scouting employs eight full-time scouts throughout North America. To report on prospects playing internationally, the NHL employs the services of Goran Stubb and his staff at European Scouting Services based in Finland.

The 2022 Upper Deck NHL Draft is scheduled from July 7-8, 2022 and will be hosted by the Montreal Canadiens at Bell Centre in Montreal, Que.

A couple of faceoff specialists are ranked for the upcoming #NHLDraft. Who do you want to see pick Grammer and Flams? pic.twitter.com/1LYUqAfBNr