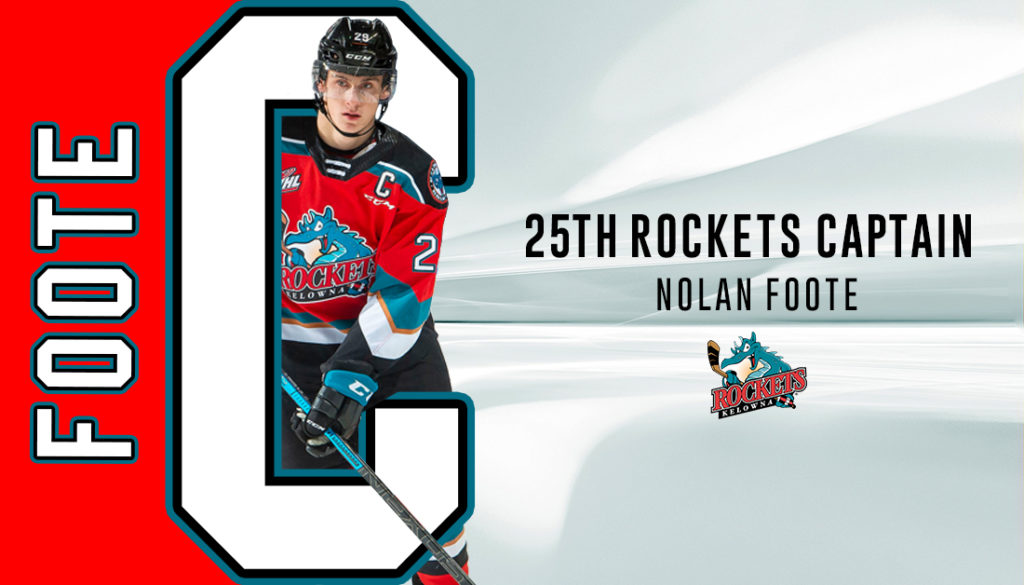 “As general manager, I included all of our hockey operations people in this decision,” said Hamilton. “When you’re picking a captain, you need someone who is going to be a proven leader and, in my mind, Nolan will be a great leader for the Rockets this season. He’s been our best player most nights this season so far, and I believe that your captain has to be your best player most nights.

“I think his brother Cal was an excellent captain for us, and he has a lot of those traits of his brother. He’s come out of his first NHL camp stronger than ever.”

Foote takes over as captain after the Rockets went without one last season. Nolan’s older brother, Cal, was the last captain of the team, wearing the C for the 2017-2018 campaign.

“It means a lot,” said Foote. “Obviously the Kelowna Rockets are such a great organization, one of the best in the CHL. I’m very honoured to wear it. It’s a huge year hosting the Memorial Cup and I want to lead this team to a championship.”

Foote, 18, is in his fourth season with Kelowna. He’s currently tied for first in team scoring with 13 points (six goals, seven assists) in nine games.

A second-round pick of the Rockets in 2015, Foote has spent his entire WHL career with Kelowna. The Tampa Bay Lightning selected him this past June during the first round of the 2019 NHL Draft with the 27th overall pick.

Foote will debut with the ‘C’ tomorrow night when the Rockets visit the Kamloops Blazers at the Sandman Centre.