Payworks Recap: Rockets pick up first win of the season with 6-4 victory over Royals 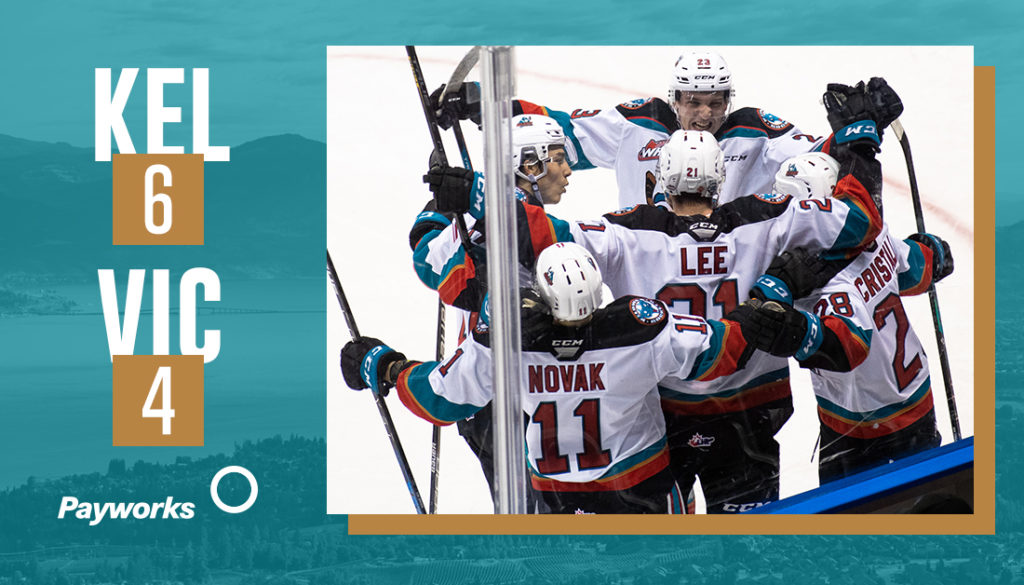 The Kelowna Rockets are heading home with a split. After falling to the Royals on Friday night, the Rockets responded with a 6-4 win on Saturday night at the Save-On-Foods Memorial Centre in Victoria, BC.

Cole Tisdale made 18 saves to pick up his first victory of the season, it was Tisdale’s first start since the 2017-18 campaign. Six different skaters found the back of the net for the Rockets, including Caden Price and Max Graham who both scored their first WHL goals.

Both Andrew Cristall (1G, 1A) and Pavel Novak (2A)  had multipoint nights. Newest Rocket, Chicago Blackhawks prospect forward Colton Dach picked up first star honours after posting a goal, seven shots on net and going 12/18 in the faceoff dot.

Kelowna captain Tyson Feist (1) opened the scoring on the power play 3:26 into the game with a sharp-angled shot that beat Royals netminder Tyler Palmer.  Royals leading scorer Brayden Schuurman (4) worked his way past a Rockets defender and fired a shot from along the goal line past Tisdale.

The second period was both teams going back and forth until the Rockets pulled away. Colton Dach (1) netted his first as a Rocket as Kelowna’s shortly after power play advantage came to an end. Gannon Laroque (1) powered a slap shot on the power play to tie things up. Andrew Cristall (1) scored his first of the season while on the man advantage. Keanu Derungs (1) once again tired it up, this time on a penalty shot. Jake Poole (1) and Caden Price (1) pushed the Rockets ahead by two before the end of the middle frame.

Schuurman (5) pulled Victoria within one early in the third while the Rockets were down a man. Max Graham (1) iced the game with a short-handed empty-net goal.

A trio of firsts tonight!

Both teams were 2/3 on the power play.

The Rockets outshot the Royals 37-22.

The Rockets are now off until Friday when they’ll open the home portion of their regular-season schedule on October 15, 2021, against the Kamloops Blazers. Season tickets are now available to the general public for the upcoming 2021-22 Rockets season. Click here for details and pricing.