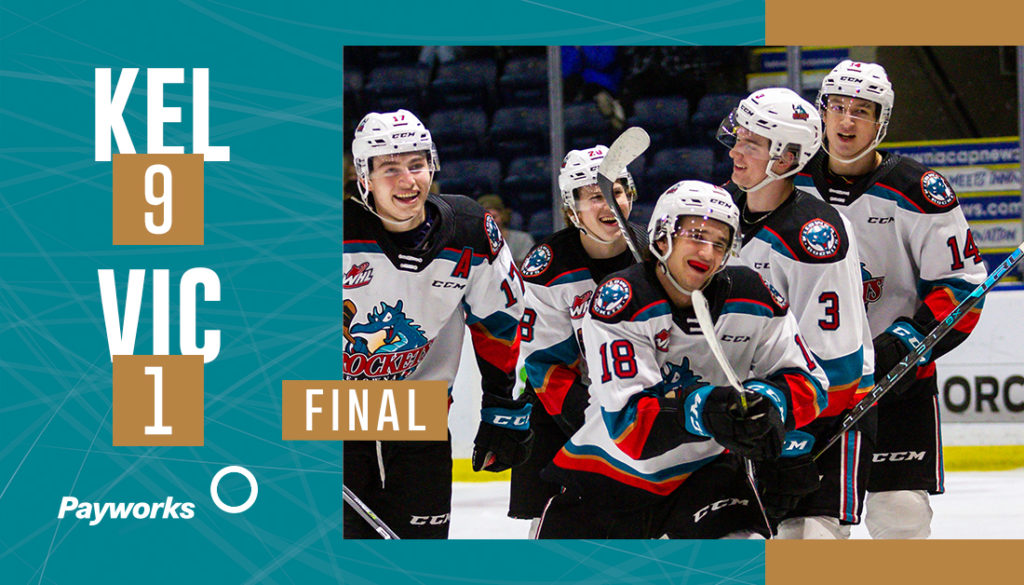 The Kelowna Rockets exploded with a season-high nine goals in a 9-1 victory over the Victoria Royals on Saturday at Prospera Place in Kelowna, B.C.

Meeting for the second time in 24 hours, the Rockets claimed their second straight victory over the Royals.

The Rockets blew out of the gate with goals from Colton Dach (14) and Rilen Kovacevic (2) within the first 5:05 of the puck being dropped. The Royals then pulled started Tyler Palmer and replaced him with affiliate goaltender, 2005 born Logan Cunningham. Kelowna did not hold back, Pavel Novak (15, 16) scored back to back goals and Max Graham (8) scored before the end of the opening period.

Palmer returned to the Royals net to start the second. Adam Kydd (5) score his first as a Rocket, Brayden Schuurman (20) got the Royals on the board, but Kydd (6) found the back of the net again to reestablish the five-goal lead. Marcus Pacheco (1) scored the first goal of his WHL career while on a five-on-three power play in the final minute of the middle stanza.

Jake Poole (10) capped off the night with his fifth point of the game, beating Palmer with 60 seconds left on the clock.

The Rockets power play was two-for-five on the night, while the Royals were one-for-nine with the man advantage.

The Rockets outshot the Royals 43-23.

Kelowna will be back in action on Friday when they head to Everett to take on the Silvertips at 7:05 p.m. Fans can listen on AM1150 or watch one CHL TV.

The next Rockets home game is Saturday, January 29 when they’ll host the Vancouver Giants at Prospera Place. Fans can purchase their tickets online at selectyourtickets.com, at the Prospera Place box office or by phone at 250-762-5050. The box office is open 11:00 a.m. to 4:00p.m. Tuesday through Friday, and opens at 1:00 p.m. on Saturday home game days.