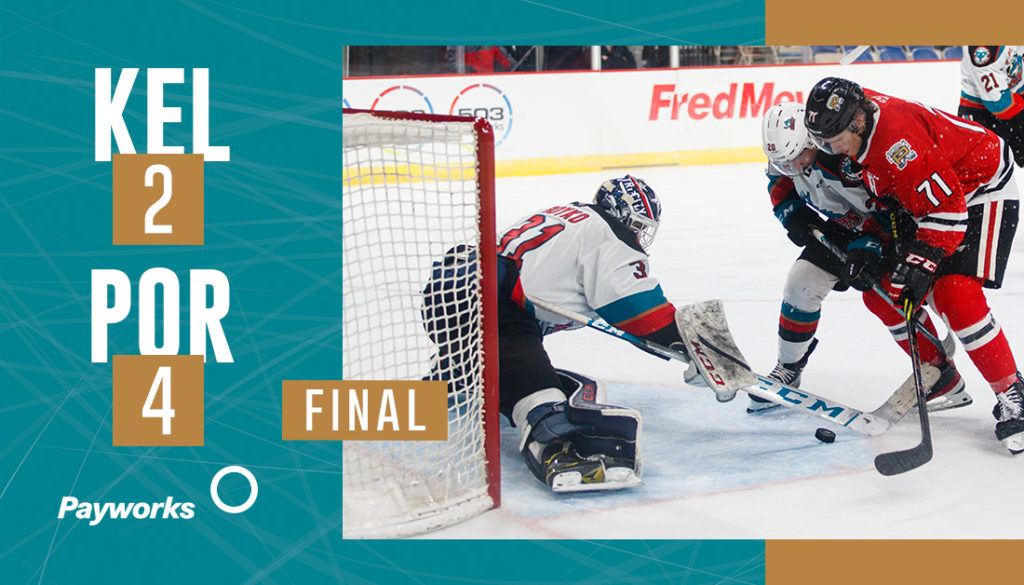 The Kelowna Rockets fell to the Portland Winterhawks 4-2 at the Veterans Memorial Coliseum in Portland, Org. on Saturday night.

The Winterhawks zipped out to a 4-0 lead in the opening frame, it was all the Hawks needed to snap the Rockets eight-game point streak as they became the first team to beat Kelowna in regulation since the Vancouver Giants on October 29.

Kelowna’s power play couldn’t get things going, with the Winterhawks shutting down all six Rockets attempts. The Rockets penalty killers stopped the four attempts that Portland had with the man advantage.

The first period was all Winterhawks, with Portland scoring four straight goals on 20 shots in the opening frame. Marcus Nguyen (2), Gabe Klassen (7), Dawson Pasternak (2) and Jaydon Dureau (3) all scored for Winterhawks. After the Dureau scored the fourth goal, Talyn Boyoko replaced Colby Knight in net for Kelowna 11:53 into the game. Knight made 12 saves on 16 shots.

Colton Dach (7) got Kelowna on the board, pouncing on a rebound just 26 seconds into the middle frame. Turner McMillen (2) cut the Winterhawks lead in half on a feed from Jake Lee.

The Winterhawks held the Rockets come back off, killing three straight penalties in the second half of the third period.

What a feed by Lee to find T-Mac, who wasted no time.

The Winterhawks outshot the Rockets 38-25.

Kelowna will be back in action on Wednesday at 7:05 PM when they head to Spokane to take on the Chiefs at the Spokane Veterans Memorial Arena in Spokane, Washington.

The Rockets next home game is Friday, Nov. 26 when the Spokane Chiefs will travel to Kelowna to face the Rockets. Kelowna will then host the  Prince George Cougars the next night at Prospera Place on Saturday. An on-sale date for single-game tickets is expected to be announced in the coming days.